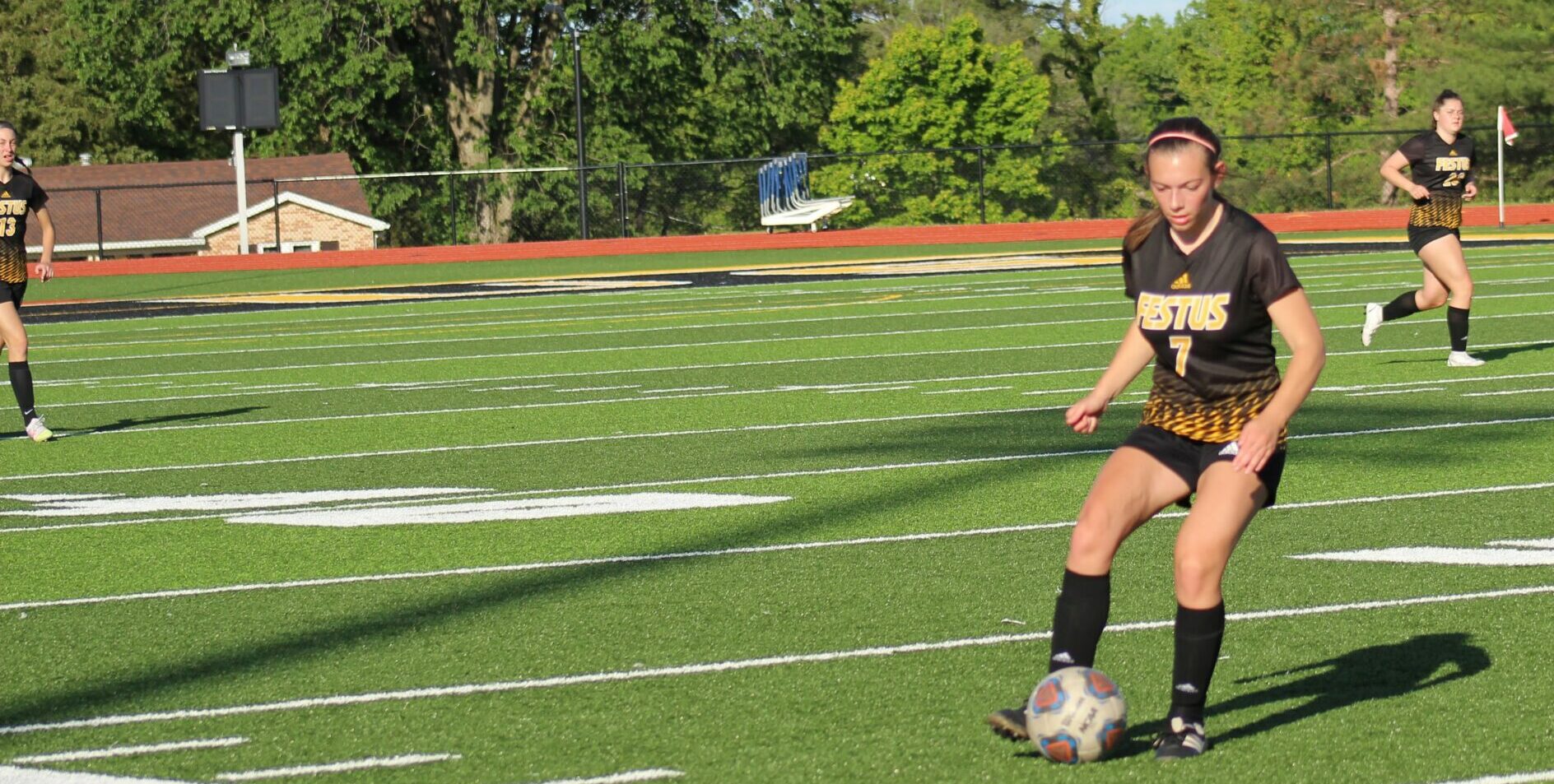 An eight-goal scoring fury, including two players scoring hatricks, leads to a huge win for the Lady Tigers of Festus over Hancock High School. The District Tournament is up next.

On May 13th, The Festus Tigers Girls Varsity Soccer team hosted a home game against Hancock. The Tigers took their time to get rolling, but once they did, the scoring frenzy was ferocious. Festus scored four goals in each half to earn the 8-0 victory, cementing their fourth win of the season. Their record is now 4-15.

The scoring didn’t start until the 28th minute of the first half, when Jersey Moonier found the back of the net off a pass from Caitlynn Johnson. Moonier wasted little time and added another goal at minute 33, coming from an Emily Holt pass. Moonier completed the hatrick at minute 36 off a pass from Joselynn Yates. Holt put up her first goal with just one minute remaining in the half, off another Yates pass.

In the second half, Holt continue the melee 12 minutes in, this time from a Moonier pass. Four minutes later, it was Holt scoring again from a Moonier assist that completed her hatrick. Lillie Williams got in on the action and buried a goal at minute 35 off a Holt pass. The last goal of the game was again Williams from Holt in the final minute, to make the final score 8-0.

The game technically ended on the eight goal differential mercy rule. Holt commented, “The Hancock game was the first mercy rule I got to experience during my high school soccer career. Everyone played hard this game and wanted the win more than anything. It was just great to be apart of it.”

Williams noted, “We had an awesome performance against Hancock! There were some great heads up plays!”

Mady Geiler and Zoe Erxleben split time in the net and each made two saves.

Head Coach Caleb Zustiak was pleased with his team, and said, “We came out slow in this week’s match versus Hancock, but continued to press the entire game, eventually winning in dominant fashion. Goals came from all three of our top scoring trio, Holt, Williams and Moonier, with assists coming from Freshmen Yates and Johnson.”

On the wings, Francesca Merlo and Gretchen Burkard worked to keep the ball on the opponent’s half. Zustiak noted, “The entire offense had their best showing, finally being able to put together passes and runs that we had been working to develop the entire season.” He continued, “This was a great showcase of our entire team’s work rate and improvement over the season. Freshman Riley Vogel had a perfect run from defense through the center of the field all the way to the goal that she was unlucky not to score.”

Vogel commented on the final regular season game, and said, “The game against Hancock was a great way for us to end our regular season. Our defense played very well throughout the game. We were able to keep the ball more up on the offensive side and got some great goals from Emily, Jersey and Lillie. We can’t forget our amazing goalies Zoe and Mady who always do an awesome job back there and take a ton of shots each game!”

The Tigers needed the big win to build on as they will now prepare for the District Tournament.