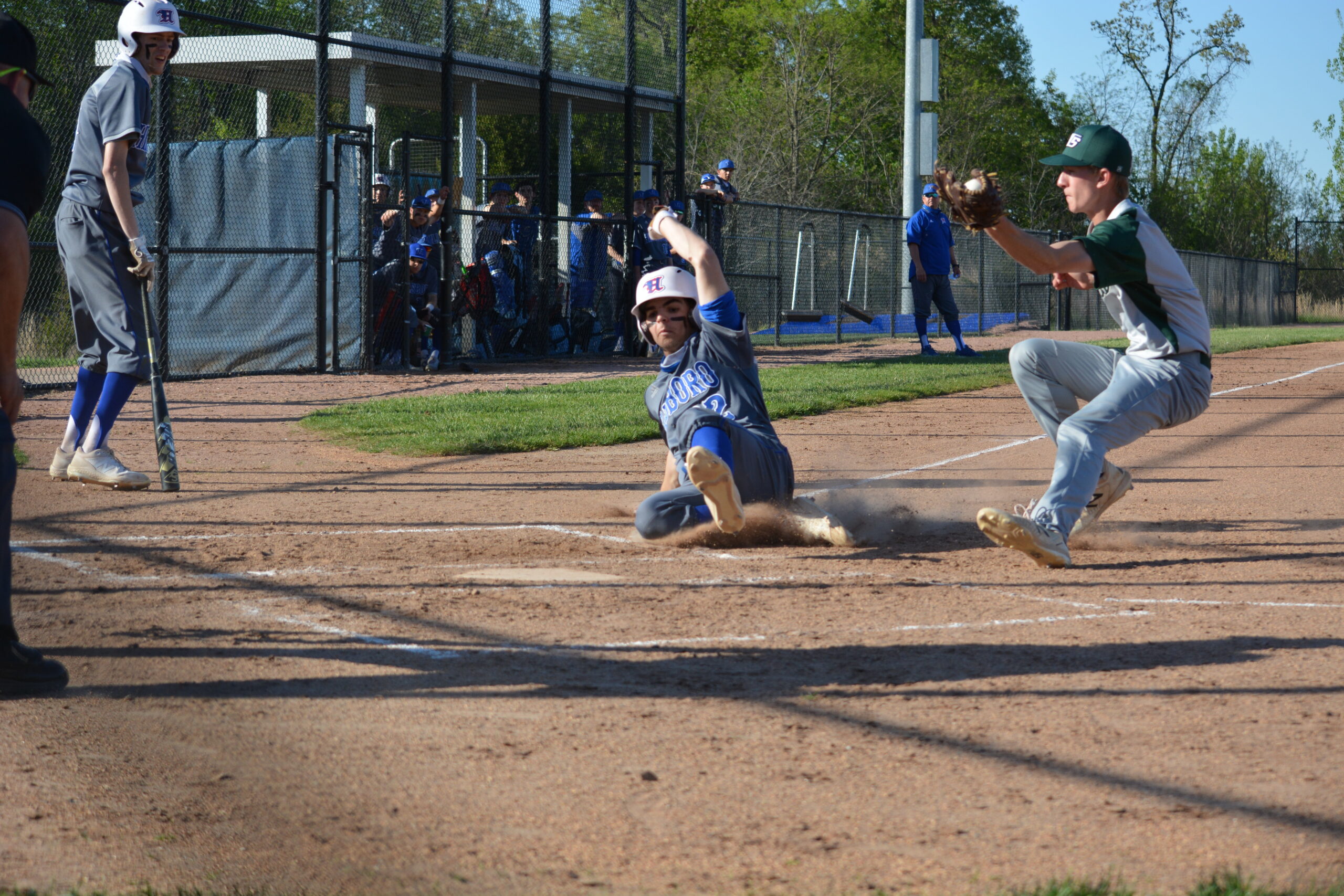 The Hillsboro Hawks Varsity Baseball team pulled out all the stops for Senior Day, including knocking in 18 runs total in a three-inning short game.

Hillsboro Baseball had some fireworks in store for the celebration of their Seniors on Friday, April 30th. The Hawks defeated Perryville 18-3 in a three-inning short game thanks to an 11-run second inning.

Micah Cook was given the start for the day, shutting down the Pirates offense for two of the three innings played, giving up no hits, walking one and striking out one. Eli Epley came in to relieve him in the third.

Head Coach Kevin Lucas commented on his team’s big win. “Being that it was our Senior Night, it was great to celebrate our six Seniors and pick up a nice conference win. There were a lot of guys that contributed tonight so that was good to see. I thought we played very well tonight. That’s now two games this week we have played pretty well, hopefully we can continue to build on that.”

Cook began the game with a strikeout of Pattonville’s leadoff hitter followed by his only walk. He quickly recovered and got out of the inning with two ground outs, one of which he took himself. Hillsboro got into a bit of a jam in the bottom of the first inning when the first two batters were retired in order, but back to back walks from Connor Jenkins and Austin Romaine set the table for Noah Shuman to drop a first pitch bomb out to left field. The Hawks ended the inning up 3-0.

Cook retired the side in order in the top of the second and it only took eight pitches to do so thanks to two pop outs and a ground out. Andrew Brody started the Hillsboro half off with a bang, roping a triple into the gap in right center. Epley reached base on a walk and Zach Whaley poked a single into left center to load the bases. Brody then scored on a passed ball to start the scoring. Gabe King drew a walk and Jenkins roped a single to right field. Romaine tagged a double to the right center gap and Shuman ripped a single to left field.

After Jase Stewart dropped a double to deep center field, we were back where we started with Cook at the plate. He helped his own cause out with a double of his own, and Brody followed suit with another two-bagger. Whaley hit his second single of the inning and King drew his second walk. Gavin Mahan came in to pinch hit and dropped in a single up the middle and Ben Schamburg pinch hit and reached base on an error. When it was all said and done, the Hawks led 14-0 entering the third.

To their credit, Pattonville did not give up. They strung together a parade of singles to score three runs in the top of the third inning but the Hillsboro offense could not be contained. Stewart, Cook, Andrew Chaves and Epley all reached base on either a hit by pitch or a walk. They were all driven in in order by singles from King, Mahan and Schamburg, which brought the score to 18-3, triggering the 15-run rule.

“The mood was really great tonight in the dugout” said King. “I think everyone really wanted to get a win and make our Senior Night game special, and I think that you could tell that by the way we approached the game today. It means a lot to me and I’m sure the rest of the Seniors to get a big win on our day to shine.”

Hillsboro has a busy week coming up. They travel to Webster Groves to take on the Statesmen on Monday May 3rd to start. The Hawks were originally scheduled to play Pattonville in a back-to-back home-and-home series, but Thursday’s game was rained out and moved to Tuesday May 4th. They then have a home-and-home series with Windsor on Thursday and Friday May 6th & 7th.