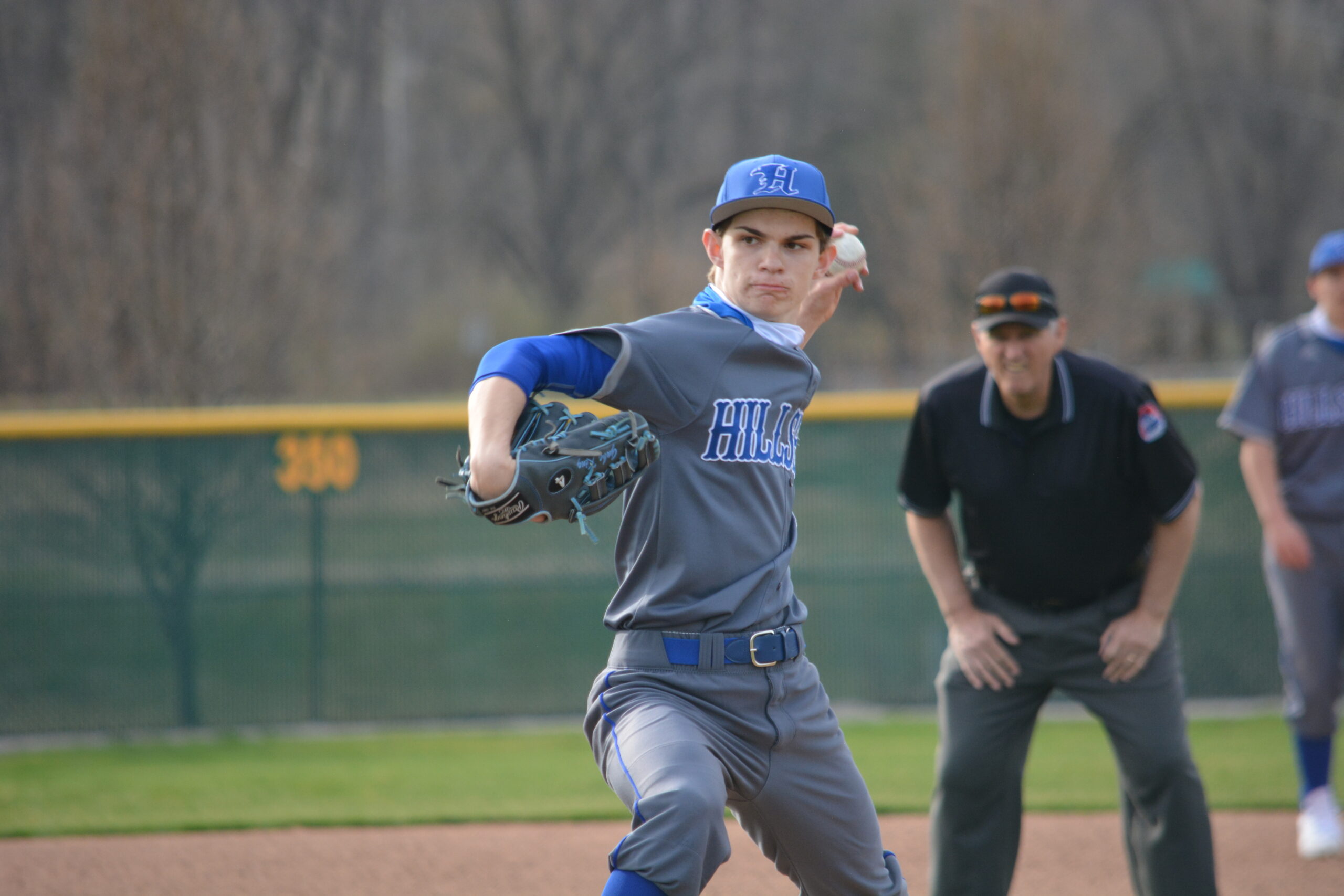 The Hillsboro Hawks Varsity Baseball team come from behind and defeat the Fox Warriors 5-2 with a 10-hit performance.

Hillsboro Varsity Baseball hosted Fox on Monday April 26th where, despite falling behind 2-0 by the third inning, were able to come back and defeat the Warriors 5-2.

Gabe King was given the nod to start. The lefthander surrendered two runs on eight hits over six innings, striking out six. Andrew Chaves came in to close in the seventh and recorded the save.

When asked about the key to winning this game, King said “I think the key to the game was our energy. I felt like everyone was into the game yesterday. I threw strikes and my defense played really well and made multiple plays. Our offense struggled a little bit but we had hits when we needed them and [were] able to put up enough to win.”

The game began like so many others this season, a walk was given up right away by King. It was followed by a stolen base and an error, which got the Fox leadoff hitter to third. It only took a single to score him and put the Hawks down 1-0. Eventually though, King settled in and was able to stop the bleeding with two fly outs and a strikeout.

Hillsboro was retired in order in the first inning, but they were able to keep Fox quiet in the top of the second, thanks to an inning-ending double-play turned by Andrew Brody. The Hawks were able to get a couple baserunners on in the bottom of the inning, but could’t make anything of it as they entered the third down 1-0.

Hillsboro gave up one more run in the top of the third, but they were able to put a cap on the Fox scoring for the rest of the game. Second Baseman Junior Arnold led off the Hawks’ frame with a double to left center field. Zach Whaley then laced a single up the left field line to score him, and King helped himself out with a single to right to put runners at first and third. Connor Jenkins manufactured a run with a sac fly and just like that the Hawks tied the game. Austin Romaine dropped in a single to move King over, and Noah Shuman sacrificed himself to score King. The Hawks ended the third inning up 3-2 and didn’t look back.

Romaine noted his team’s selflessness, saying “I feel the key moments were guys in scoring position at times and our hitters just doing the job and putting the bat on the ball. I think we had like three sac flys.”

Both teams were held quiet until the sixth when Brody led a parade of singles which scored two runs. Brody, Arnold, Whaley and King all recorded singles before the first out to bring the score to its final of 5-2.

“Gabe King did a great job pitching,” said Head Coach Kevin Lucas. “He threw six innings and our defense helped get him out of a few jams. I felt we did a lot of good things like putting down some bunts, taking some extra bases, defense making the plays and we got some timely hits with runners in scoring position.”

Whaley also praised his pitcher, saying “Honestly it all started out with pitchers being able to go out there and throw strikes. Also, as a team we fielded the ball well [and hit the ball well] and tried to stay within ourselves.”

Hillsboro plays Perryville in a home-and-home series beginning at Perryville on Thursday and Friday, April 29th & 30th. They then travel to Webster Groves to take on the Statesmen on Monday, May 3rd.