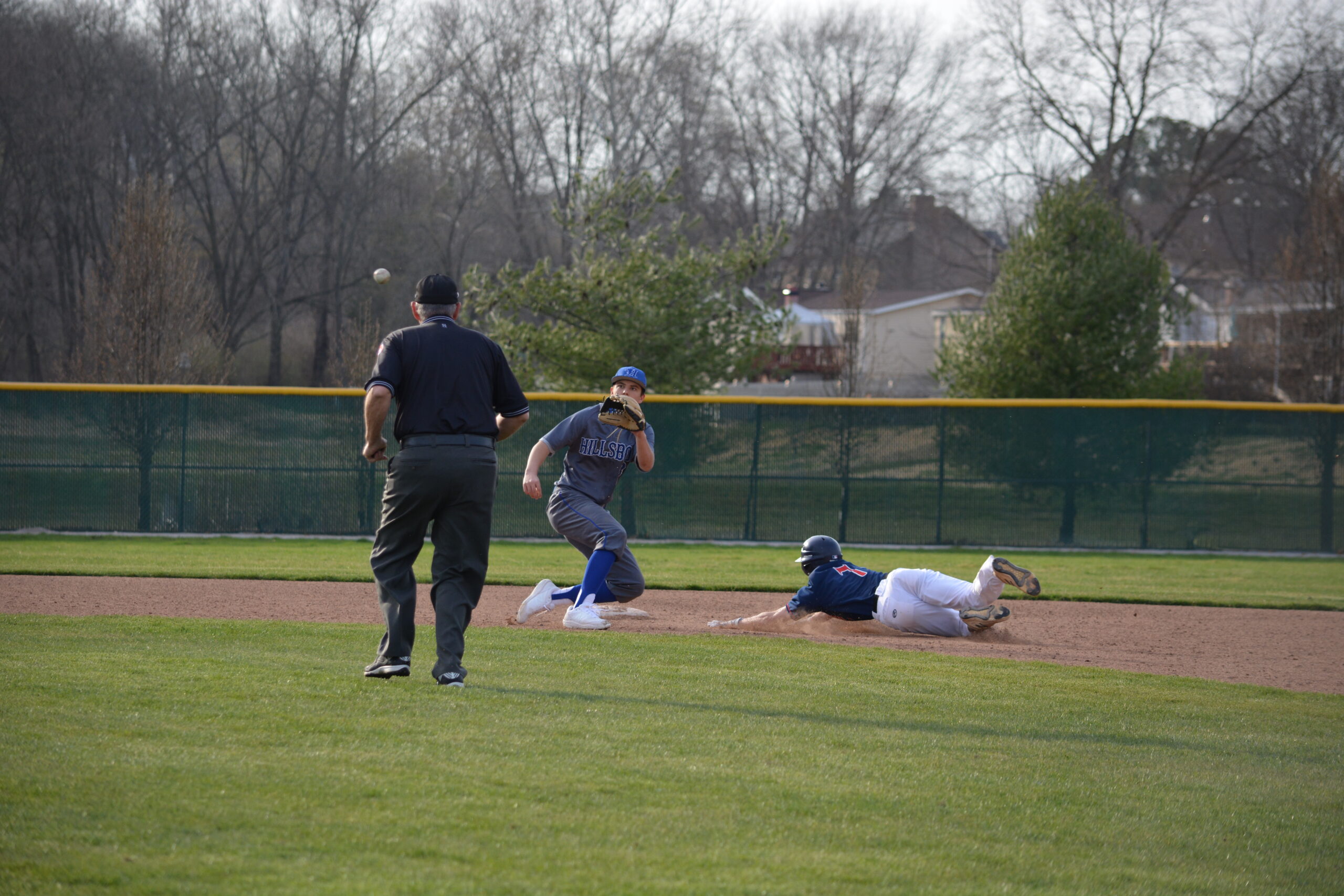 The Hillsboro Hawks Varsity Baseball squad wins a game, but drops a pair in the Potosi Tournament over the weekend. They finish 1-2, but showcase some big bats and one truly impressive pitching performance.

The Hillsboro Hawks Varsity Baseball team dropped two out of three games this weekend, but showed just how formidable they can be in the first and second games.

The Hawks played Union, Potosi and the St. Louis Patriots on Friday and Saturday April 16th & 17th. Hillsboro stomped Union by a score of 11-0 on the back of a fantastic pitching performance by Eli Epley. The Hawks then fell to Potosi in a 13-12 dogfight and very nearly came back in the bottom of the seventh inning. In the third game of the series against the St. Louis Patriots, they let the lead slip early but could never recover, and dropped the game 18-4.

Epley led the Hawks to their 11-0 victory in the first game, only giving up three hits, striking out five, and surrendering zero walks. Hillsboro was held scoreless for the first two innings, but Designated Hitter Gabe King led off the third inning with a single. Noah Shuman followed him up with another single before Connor Jenkins laced the third single in a row to shallow center field to load the bases. Andrew Brody then plated two runs with a double to left-center, and Jenkins scored on a passed ball. Cruz Valencia brought the final run of the inning in and the Hawks were up 4-0.

Union was retired in order the first three innings. The top of the fourth began with Zach Whaley lacing a single up the middle. He was moved over to second with a productive out from King, and then scored on a Shuman double to left field. Jenkins scored Shuman with a single, and the game was broken wide open for the Hawks with a walk followed by two hit-by-pitches. The score was 7-0 when the dust finally settled. Union started off the fourth with a single, but that just set up the double-play Hillsboro turned to end the inning.

The Hawks scored two more runs in the fifth, thanks to another double by Shuman and a single from Jenkins. Valencia started the sixth off with a single, and Bailey Heidbreder moved him over while reaching base on an error. Valencia scored on a passed ball, and subsequently scored on a sac fly hit by King. After Epley retired Union in order in the bottom of the sixth, the game was over due to the 10 run mercy rule.

Hillsboro had a barnburner against Potosi the next day. They got off to an early 3-0 lead in the first inning thanks to singles from Junior Arnold and Shuman, plus a double from Austin Romaine. The Trojans pulled ahead in the top of the second, but a five run bottom half put the score at 8-4 in favor of the Hawks. Kaleb Spiller and Arnold were given free passes on back-to-back walks, and an infield hit struck by Epley scored them both. Shuman ripped a double to left field, and Romaine dropped a two-run bomb to centerfield to complete the scoring in the second.

Both teams were held scoreless in the third but Potosi once again tied up the game with a four-run fourth inning. Jase Stewart scored the lone run in the bottom of the fourth, to put Hillsboro up by one again, putting the score at 9-8. Potosi was able to scratch out a three-run fifth inning, and hold the Hawks scoreless, putting them ahead 11-9. They were stopped by an inning-ending double-play turned by Hillsboro third baseman Micah Cook. The top of the sixth had more of the same in store, with two runs scoring, but the Hawks showed some serious defensive talent. Spiller threw out the would-be third run at the plate from right field, and a second inning-ending double-play turned by Arnold and Stewart held the score to 13-9 in favor of the Trojans.

The Hawks put together two runs in the bottom of the sixth, which started out with a Gavin Mahan hit by pitch followed by a Heidbreder double to score him. Jenkins moved Heidbreder over with a sac fly, and Arnold was able to score Jenkins with a single to make it a two run ballgame at 13-11. Potosi was retired in order in the top of the seventh, and the Hawks mounted a comeback in the bottom of the inning. Romaine reached base on an error and was moved over to second on a single from Mahan. Jenkins scored him with a single of his own, but that was to be the only run Hillsboro could get in the final inning, coming up just short 13-12.

Shuman and Arnold were the pitchers on record for the Hawks, with Shuman getting the start. He went 3.1 innings, giving up six hits, five walks and three strikeouts, while Arnold went 3.2 innings with six hits of his own, plus four walks and four strikeouts.

The final game of the tourney against the St. Louis Patriots was not so much as back-and-forth. The Hawks slipped back into a groove they were in earlier in the season, and fell 18-4. An eight-run first inning sealed Hillsboro’s fate, as defensive miscues and free passes were to blame. Six of those runs reached base on either a walk or an error, and four of them scored on either a passed ball or an error.

The Hawks got on the board in the bottom of the second inning, with Stewart roping a single up the middle and scoring on a triple from Chaves. The Patriots were silenced in the second and third innings, and Hillsboro was able to chip away at that lead when King hit a double to right field, and was brought in to score on a single hit by Jenkins, bringing the score to 8-2.

The top of the fourth inning featured two more runs scored by the Patriots, with one of those reaching base on a walk, making the score 10-2. Both teams were unable to score in the fifth inning, but the sixth saw the game slip further out of reach for the Hawks as they gave up another eight runs. There were a total of six walks in the inning, with two runs scored on wild pitches, and another on a dropped third strike. Facing a 16-run deficit entering the sixth inning, Hillsboro refused to lie down. With two outs, they started to rally. Stewart and Valencia reached base on a walk and an error, and Chaves ripped a double to deep left center to score them. Unfortunately it would be too-little-too-late, and the Hawks dropped the game 18-4.

The Hawks take on arch rival Festus in a home-and-home series on April 22nd and 23rd, with the first game being played at Festus. They then have a double- header at home against Northwest on Saturday April 24th.