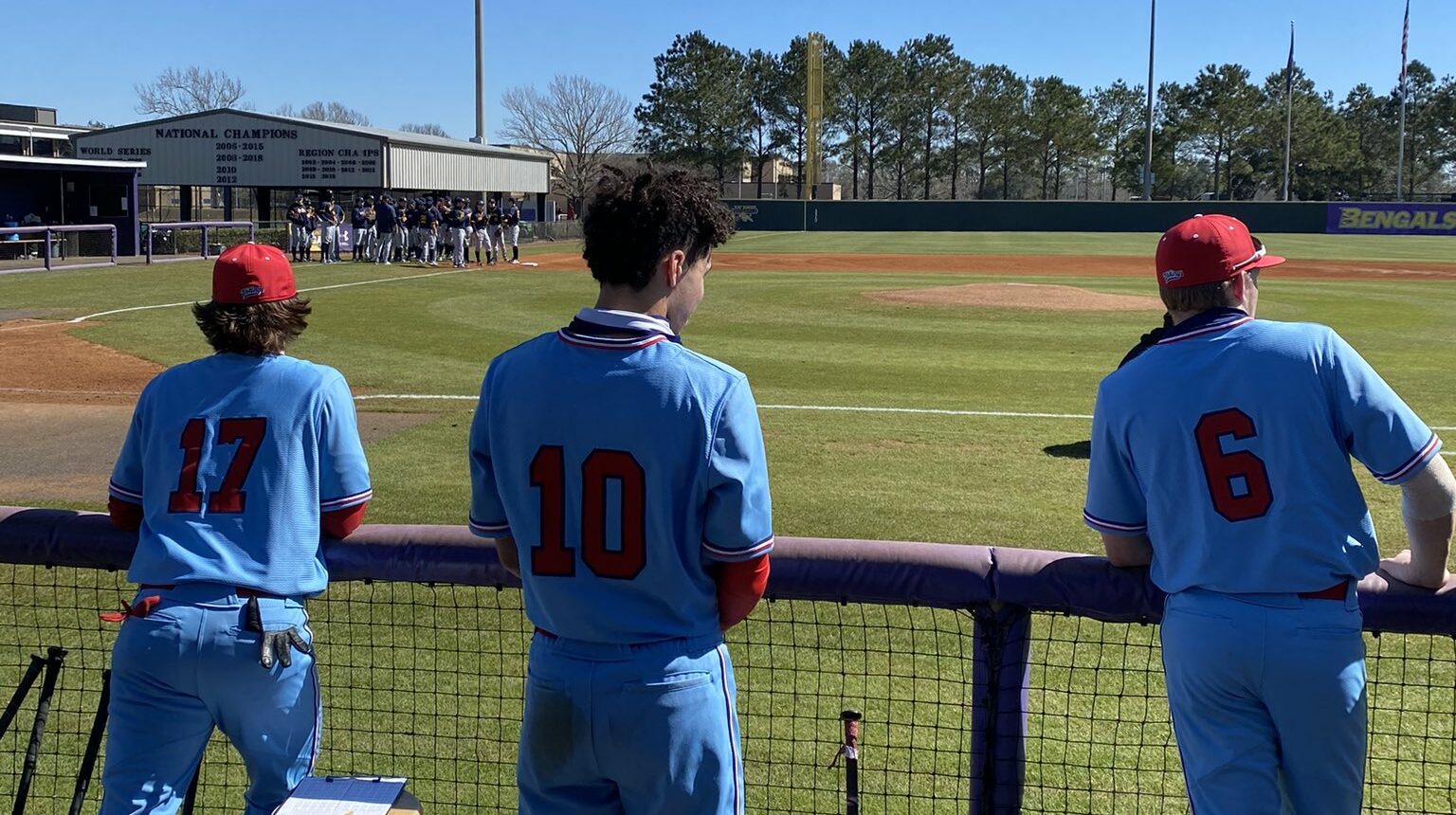 JeffCo Vikings Have Up and Down Start to Season

The Jefferson College Vikings Baseball team finds itself sitting at 2-3 after a week-long slate of games. Moderately tough sledding to start the year, but this talented squad has another gear in store for the rest of the league.

The touted Jefferson College Vikings Baseball team was itching to get back on the diamond after a frustrating, pandemic-shortened season last year.  On February 20th, 2021 that itch was finally scratched and baseball was back for the stalwart Vikes.

Naturally, this was great news for everyone in the organization, and certainly a tension-reliever for new Head Coach Zac Bone.  The only caveat being, the season didn’t exactly start the way the Vikings would have hoped.

The 20th began a string of six games (eventually five, after a cancellation) in a week for Jefferson, and the Vikings managed a 2-3 record.  Certainly not an unscalable mountain in the grand scheme of things, but, in the same vein, not the start they would have scripted either.  Especially regarding the first two head-to-head matchups.

Game one of the season for the new-look Vikings was a nail-biter that quickly turned into a heart-breaker, as they lost 6-5 on the final play of the game to the Highland Community College Scotties.  A walk-off single completed the three-run 9th-inning comeback for the home team, and Jefferson saw their 5-3 lead dissolve, and transform into a 6-5 defeat.

That’s not to say there weren’t positives in a game that ultimately had a negative ending.  The Vikings outhit the Scotties 7-3, and posted a defensive clean sheet with zero errors on the day.  Not to mention, starter Eli Ecton was a boss on the mound, as the righty tossed 5.1 IP and allowed just two runs on one hit with eight Ks against three walks.

On the offensive side, first baseman Matt Schark and left fielder Gideon Antle were the true standouts.  Schark blasted a bases-clearing double and finished the day 2-5 with 3 RBI, while Antle was the only player to go deep in the game.  He finished with two runs, two walks and a two-run homer.

The second game of the season wasn’t quite as gut-wrenching for the Vikings, but was frustrating in an entirely different manner.  This tilt, against offensive giant BRC, was pretty much over as soon as it started.  BRC put up one in the 1st, three in the 2nd, one in the 5th and five in the 6th; dropping a 10-spot on Jefferson.

The Vikings were held without an extra-base hit and managed just one run on an RBI-single in the 4th by shortstop Hesston Gray, falling victim to a 10-1 schellacking.  The only other notable offensive standout was right fielder and leadoff man Payton Howard, who went 2-4 with a pair of singles.  Starting Pitcher Gavyn Dockery took the loss after allowing five runs on five hits and a pair of walks over five innings on the bump.

Thankfully this was just game one of a double-header with BRC, and the Vikings had a chance for revenge.  The second game was a stark contrast to the first and seemed to part the clouds, blast some sunshine and inject some offense into JeffCo.  They flipped the script in this one, as they turned right around and embarrassed BRC to the tune of a 9-0 drubbing.

Two runs in the 1st was enough for the win, five in the 2nd was gravy and two more in the 6th was bacon bits on said gravy.  Designated hitter Jordan Duncan led the way, going 2-4 with a double and 4 RBI, while Schark drove in a pair of runs as well.  Shortstop Josh Gibson went 1-3 with three runs scored, an RBI and a stolen base.

As for the antics on the mound, Charlie Pratt and Brayden Eftink combined for a two-hit shutout.  Pratt went four innings, allowed two hits and struck out four, while Eftink closed the door with three innings of no-hit ball and allowed just two baserunners as well; via walk.  Their efforts propelled the Vikings into the win column for the first time on the young season.

However, Jefferson’s second double-header would put an immediate damper on that good-day-sunshine feeling after their first win.  Facing Lakeland Community College in the first of two, the Vikings got dusted 10-2.  A five-spot in the 2nd and another in the 4th was all she wrote, as Jefferson fell to 1-3 on the season.

Offensively they managed just three hits and four walks, and one of their two runs scored was the benefit of an error.  Second baseman Jean Gonzalez did manage to go yard with a solo blast in the 7th and Howard went 1-4 with a stolen base, but there wasn’t much else to report offensively.

The arms just couldn’t get it done in this one either.  Ecton, coming of a brilliant first start, struggled to the tune of six runs on four hits and seven walks over just three innings.  Command was certainly a factor as he was tagged with his first loss of the season.

But, true to form in game two of a double-header, the Vikings decided to stick it to their opponent revenge-style once again.  This time in part two, they thought it best to wait 12 innings for glory, but it came nonetheless.  After being knotted at 1-1 though the first 11 innings, the Vikings’ offensive ship finally docked in the 12th as they exploded for four runs to give them an eventual 5-1 win and a 2-3 record on the season.

Antle went 1-5 with a pair of stolen bases and tied the game with a critical RBI double in the 7th that would send them into extras.  Gibson, Duncan and Bryce Miller each drove in a run as well.  On the mound, Pratt was solid once again as he cruised though 4.2 IP, allowing just one run on two hits and five BBs against six Ks.  However, Adam Drewry was the big story on the bump, as he dazzled for 7.1 shutout innings, after a tough outing that ended the Vikings’ first game of the season.  This time he got the win by allowing just four hits and a pair of walks while striking out seven.  A nice bookend for the talented right-hander.

That start to the season for Jefferson pretty much personifies a seesaw… or an elevator… or a cat watching a yo-yo… or anything that goes up and down.  But the good news is it’s early, and you can bet dollars to donuts that Coach Bone will find the right combination with this talented and versatile group of young hitters and pitchers to string together some victories sooner rather than later.

JeffCo Vikings Have Up and Down Start to Season