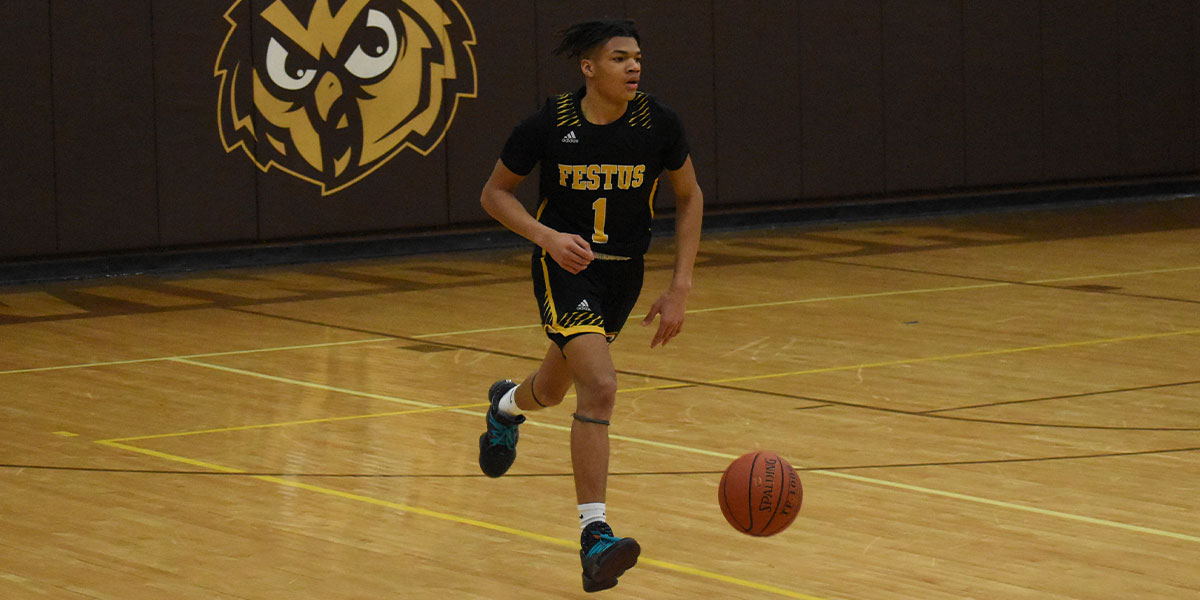 The Festus Tigers Boys Varsity Basketball team’s season ends with a 78-65 loss to the Farmington Knights in the District semi-finals. Festus ends their campaign with a 19-6 record, but a bright future.

The Farmington Knights ended the Festus Tigers Boys Varsity Basketball team’s season 78-65 in the semi-finals of the Class Five District Two Tournament. This was the Tigers’ second loss to the Knights this season.

Festus came into this game red hot and on a six-game win streak. Their last loss was January 26th… to Farmington. The Knights have had Festus’ number for years. Festus is 1-8 against them since 2012.

Farmington came out of the gate and established themselves offensively right away. They exploded for 26 first-quarter points and the Tigers did what they could to keep up. Cole Rickermann had the hot hand and hit three shots from three-point range. Arhmad Branch got it going with five points in the first as well to help the Tigers to 17 total points.

The Knights continued to score the ball well though into the second quarter. Collin Reando got on the board for the Tigers and Branch added six more to his total, however, Farmington still edged out Festus 19-13 in the quarter and went into halftime with a 45-31 lead.

Festus made some adjustments at halftime and came into the third quarter ready to cut into the Knights’ lead. Branch stayed hot and scored ten more points while Reando and Rickermann each added four more. Festus outscored Farmington 18-13 and cut the lead to single digits heading into the final quarter.

Festus did all they could in the fourth. Collin Weinhaus hit two shots from three-point land and Branch added three more points to his total as well. However, Farmington hit their free throws in crunch time and put up 20 points in the quarter. The Knights sealed up the 78-65 win and sent the Tigers home for good.

“Very proud of my kids and the way they played this season,” Head Coach Jason Therrell said. “They did everything I asked them to do all season and had a great year.”

Branch led the team with 24 points. Rickermann was just behind with 16. Reando was the only other Tiger in double-digits with ten points. Weinhaus had nine, and Connor Westhoff, JD McDowell and Desmond Davis all had two points each.

Festus ended their season with a 19-6 record. The Tigers accomplished a ton over the course of the season. For the seniors, this was a sad note to go out on, but they have nothing to hang their heads about.

“As for my career, I am definitely sad to hang up the jersey,” Reando said. “Basketball has been in my life for a long time, and I definitely wish I had more time to play the game. Coach Therrell has been an unbelievable coach for me. Not only has he helped me grow as a basketball player,but also as a person.”

As for the underclassmen, the loss has them motivated to progress and get better in the future.

“I think we keep doing what we are doing and keep putting the work in,” Weinhaus said. “I’m very excited to see what next year has in store for the team.”

Branch echoed that sentiment, saying  “We’re just going to get bigger stronger and play smarter. I feel like we will have a chance to go on a big run in the playoffs.”

These young Tigers are hungry for postseason success.

They are graduating three seniors and bringing back most of their core rotation players. With other young Tigers working hard in the program, Festus’ Varsity squad has a bright future ahead.