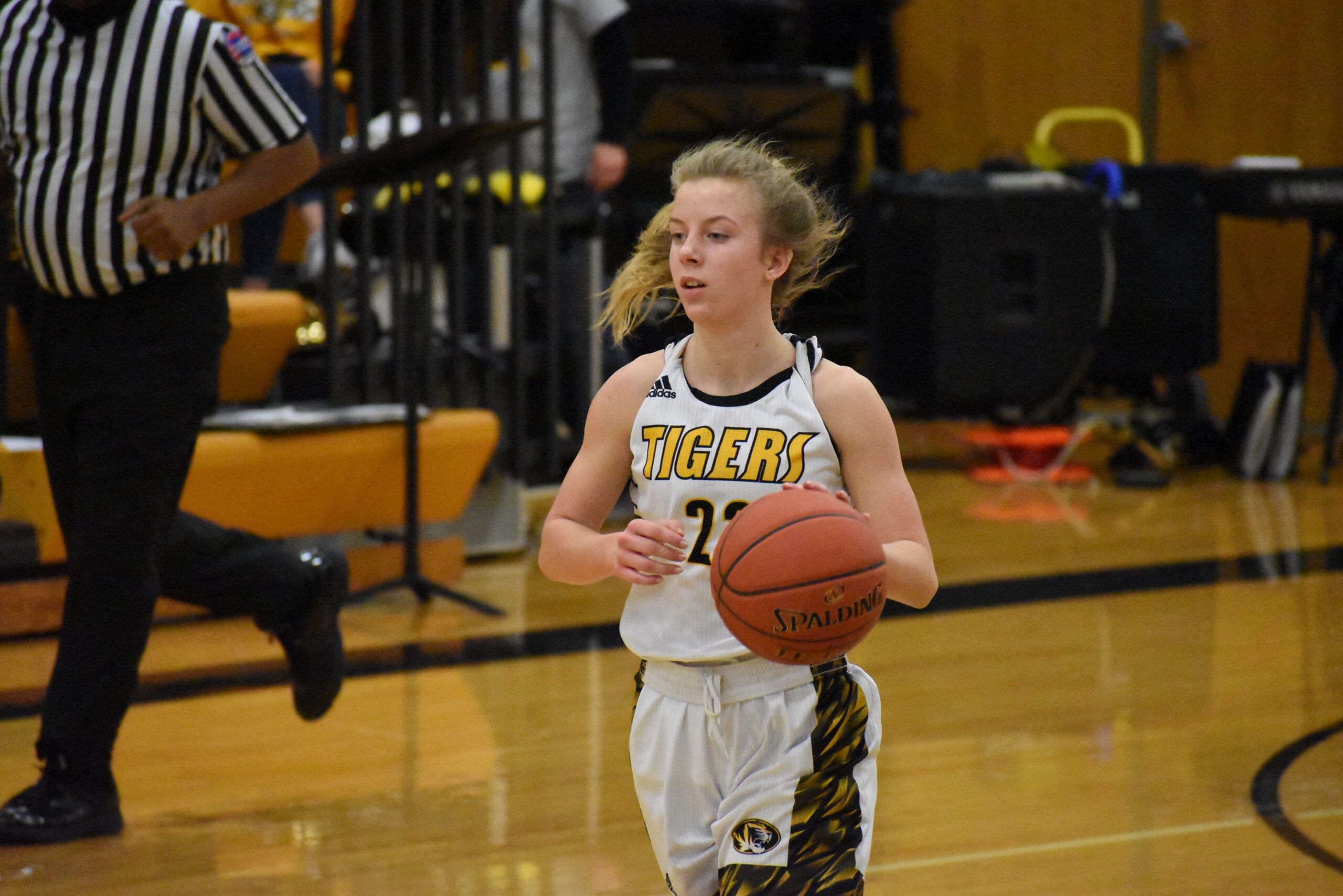 The Festus Tigers Girls Varsity Basketball team sneak past the Windsor Owls 75-68 in double overtime of their regular season finale thanks to an incredible 42 points from Josie Allen. They start their District Tournament Saturday, Feb. 27th against Hillsboro.

The Festus Tigers Girls VarsityBasketball squad battled the Windsor Owls in a nail-biting 75-68 double-overtime win on Thursday. The Tigers are 8-1 against Windsor dating back to 2014.

The Tigers’ regular-season finale was a barn burner, to say the least. The momentum was wrestled back and forth throughout all four quarters, but Festus initially took hold of it in the first quarter. The Tigers scored 21 points and held the Owls to only nine. Festus held a double-digit lead heading into the second.

The Tigers built their lead in the second quarter. They added 18 more points to their total and only allowed Windsor to score 11. Festus was in control and ahead 39-20 at halftime.

Windsor made adjustments at halftime though and came storming back into the game in the third quarter. The Owls’ defense picked up their intensity, and Festus began to have a tougher time scoring than they did in the first half. Windsor scored 16 in the third and held Festus to its worst quarter of the day with only seven points. However, the Tigers still held a ten-point lead heading into the fourth.

Windsor continued to mount its comeback effort. The Owls had their best quarter of the day at the most opportune time and scored 21 points in the fourth. Festus was forced to work for all of its baskets. The Tigers could only muster up 11 points in the final frame. The quarter ended with both sides locked at 57. This game was headed into overtime.

It was evident that neither side was going to let this game go. The game slowed to a grinding pace, and both teams continued to butt heads. Windsor scored six in the first overtime period and Festus did as well. This one would be decided in double overtime.

Festus got back to the offensive success they saw in the first half. They scored 12 points and only allowed the Owls to score six, finally locking up the 75-68 win.

“We continued to play hard throughout both overtimes and we all just stayed focused,” Josie Allen said. “Defense in overtime helped us pull the win off.”

Allen went nuclear throughout this game. She scored a career-high 42 points and pulled down eight rebounds. Mya Courtois was second on the team with nine points and Lily Knickman was just behind her with eight. Knickman also had a team-high 12 rebounds. Tristan Foulk had six points while Anna Arman had four. Samantha Helbruek and Emily Holt each had a basket as well.

The Tigers end their regular season with a 9-7 record and now await the start of their District Tournament. Festus is the four seed and is matched up with the familiar fifth-seeded Hillsboro Hawks. Festus has played their rivals twice already this season and has split the series with one win and one loss. The tie-breaking matchup with each sides’ season on the line takes place Saturday, Feb 27th.