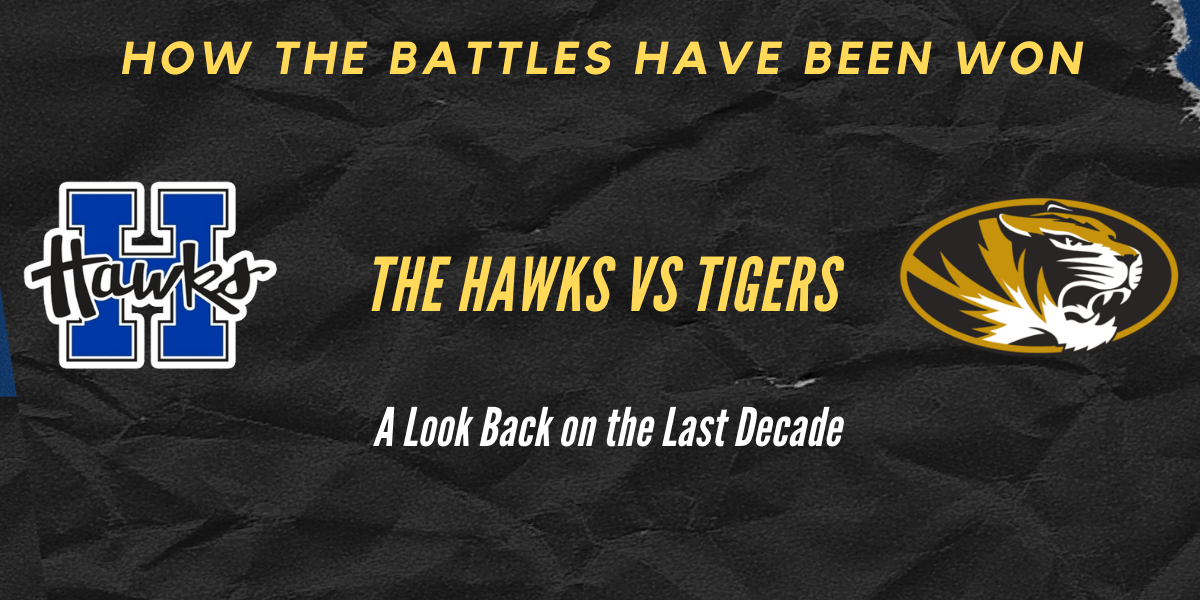 Hillsboro Vs Festus, a Rivalry for the Ages

A back and forth storied history exists between the Hawks of Hillsboro and the Tigers of Festus, especially on the basketball court… Not that things weren’t interesting before, but they just may get even more intense in the weeks to come.

The Festus Tigers and Hillsboro Hawks have battled for Varsity sports titles for years. Ever since the infamous injury to Hillsboro’s Mark Steighorst caused by a Festus player, these teams have been at each others’ throats. 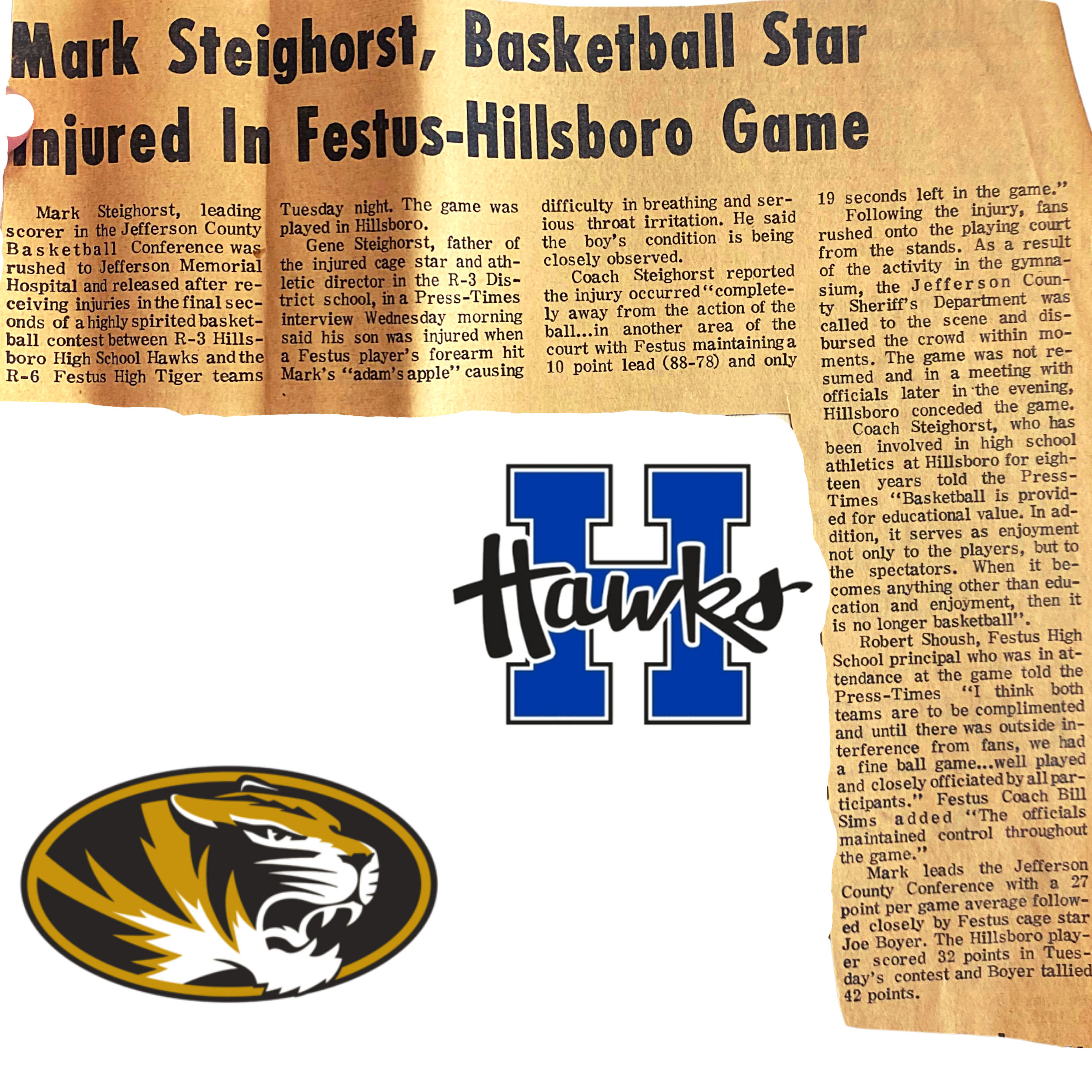 The matchup, which most deem the “Highway A Rivalry”, is present in the minds of every Varsity athlete each year. These are two schools with deep-rooted ties to their community, and their respective uniforms have been passed down from generation to generation. Hillsboro Boys Varsity Basketball has ruled the rivalry over the Tigers in the past, but Festus has done its best to flip the rivalry on its head this season.

Let’s rewind almost 12 years to the 2008-2009 season where Hillsboro won both their matchups with Festus. The Hawks won the first game 64-53 with Kevin Kramer leading the way. He scored 25 points, had four rebounds and three steals in the game. Zach Winchester was another big contributor with 15 points and four steals. For Festus, Cody Roberts did his best to fight off the Hawks with 17 points.

The Tigers fared better in their second matchup, but still came up short. Hillsboro won 53-52. This time it was Jared Huskey who led the Hawks with 12 points and eight rebounds. Roberts improved on his performance and scored 21 in the loss for the Tigers.

Those two losses were the start of four in a row for Festus. On top of that, they lost again to Hillsboro in their only matchup with the Hawks in the 2009-2010 season.

Then Festus finally took a game from Hillsboro in the 2010-2011 season. Hillsboro had beaten them once already that year, but then the Tigers stole a 55-48 victory on their home court. Cody Russell had 18 points and Tyler Ludwig had 15 in the game for Hillsboro. Blaine Eggemeyer and Austin Schwent did the heavy lifting for the Tigers. Eggemeyer scored 18 and Schwent had 12. Festus was able to grab one win in the rivalry, but Hillsboro went 2-1 against the Tigers on the season. At this point, the Hawks were 6-1 in their last seven duels with Festus.

It wasn’t until the 2011-2012 season that Festus started to counter-punch the Hawks. The Tigers ran over Hillsboro in their two matchups that season, 72-48 and 72-40. The second matchup held some weight because it was a district tournament game. Eggemeyer and Schwent both played pivotal roles against the Hawks that season. Eggemeyer averaged 16 points per game against the Hawks and Schwent averaged 17.5.

The Tigers went on to win five of their next seven meetings with Hillsboro.

On December 15, 2015, Festus won their first matchup in Hillsboro’s annual Gene Steighorst tournament. They won 72-62 with Kamau Kinder leading the charge for the Tigers with 24 points, ten rebounds and eight assists

Then suddenly, something clicked for the Hawks as they took complete control of the rivalry once again in 2015-2016. Hillsboro would go on to win its next ten matchups with Festus over a five-year span!

Those teams included players like Gaven Pinkley and Michael Brewer. Pinkley averaged 23 points per game in four matchups with the Tigers from 2016-2018. Brewer put up 16.8 points per game and 8.3 rebounds over six games against Festus from 2017-2019. Mark Moore, Ethan Worley and Evan Worley also held down the fort with heavy contributions for the Hawks in the 2019-2020 season.

It wasn’t until this current season that Festus was able to break their drought. On Jan. 15, 2021, the Tigers beat the Hawks (64-53) for the first time since 2015. The new guard of Arhmad Branch, Cole Rickermann and company have done their best to flip the script(once again) on the rivalry and show the Hawks they are for real.

Rickermann averaged 19.5 points per game against the Hawks this season to lead the way. Branch scored 19 in their first matchup, but then had to sit out the second because of contact tracing due to COVID.

To pile on for Festus, the Tigers came back from a nine-point halftime deficit to beat Hillsboro in their most recent run-in.

Zach Whaley, Noah Holland and the rest of the Hawks have done their best to stay competitive with the Tigers, but have come up short thus far this year.

It’s been a tough battle over the past two decades with these teams trading dominance, but someone has to emerge as the next favorite. These two squads may not meet each other again until the district tournament later in February, but that doesn’t mean it won’t be just as intense as before.

One thing is for certain though with these two teams, the rivalry exists… and the history is there to back it up. Any time they set foot on a court with one another, both sides want nothing more than to come out with a win and send the other side home disappointed.

Will the Tigers be able to take hold of this rivalry like the Hawks have done in the past? Or will Hillsboro swing the momentum back in their favor for years to come? Stay tuned.

Hillsboro Vs Festus, a Rivalry for the Ages