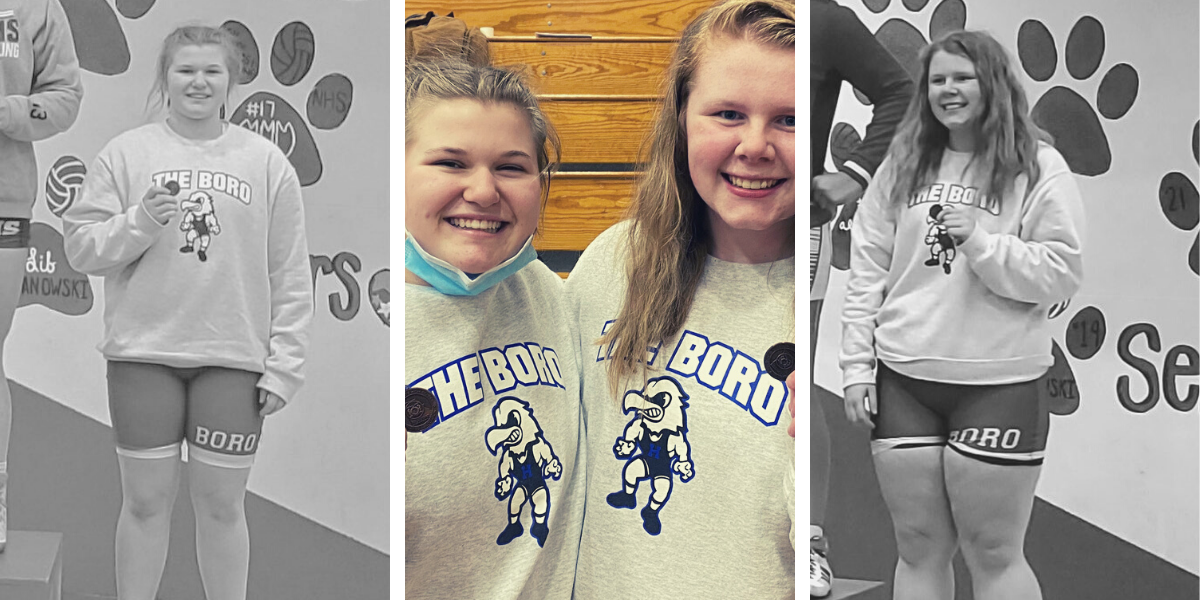 The Wrestling Lady Hawks of Hillsboro place 12th out of 23 schools, coming home with two Bronze Medalists. Alliegh Cullley and Marissa Hudman will compete in Sectionals.

Over the weekend, the Hillsboro Hawks entered four competitors into the MSHSAA Girls District 1 tournament, the first leg on the road to the Missouri State tournament. Given the few entrants, the team itself didn’t stand much of a chance of winning the tournament as a whole, however, they still came in 12th out of 23 schools, by scoring 32 team points.

Individually, the wrestlers that did enter had a great opportunity to show their skills. Two of the four wrestlers did in fact reach the podium, coming home with Bronze Medals, good enough to advance to the next round of the tournament, the Sectionals. Girls Head Coach Jeff Hoese enjoyed working with his team all season, and said, “I’m extremely proud of our girls’ effort at the District tournament.”

Entering the tournament at the 132 lb. weight class for Hillsboro was Ashlynn Dean, who had a bye in her quarterfinal match. She was then pinned in the semifinal and consolation semifinal matches, eliminating her from the tournament.

Hoese noted, “Dean and Hendrix both lost in the bubble rounds to advance to sectionals. They both had great seasons and I’m already looking forward to coaching them next year.”

At 174, Alleigh Culley, had an excellent day. She was pinned in her quarterfinal match, but managed to wrestle back through the consolation bracket. She won her consolation semifinal match by pin in 53 seconds, and then won the third place match by pin in 1:44, to earn the Bronze Medal. By placing third, she advances to the next round, the Sectional tournament.

Lastly, at 235, Marissa Hudman also performed well, and brought home the Bronze Medal. Hudman received a bye in the quarterfinal round, but was defeated in the semifinals, pushing her to the consolation bracket. She won the consolation semifinals by decision 11-6, and then won the third place match by pin in 4:53. She reached the podium, and advanced to Sectionals.

Earning a medal in Districts is an impressive feat, especially for a program that is only in its third year. Hoese commented, “Culley and Hudman have the honor of being Hillsboro’s first two girls District medalists. Alleigh has really come on strong these last few few weeks.” He added, “Marissa started wrestling in the inaugural girls season as a sophomore, and to see her be one of our first District medalists as a senior was very special.”

The grind isn’t over just yet. The season will continue for Culley and Hudman as they will now prepare for the Sectional tournament.