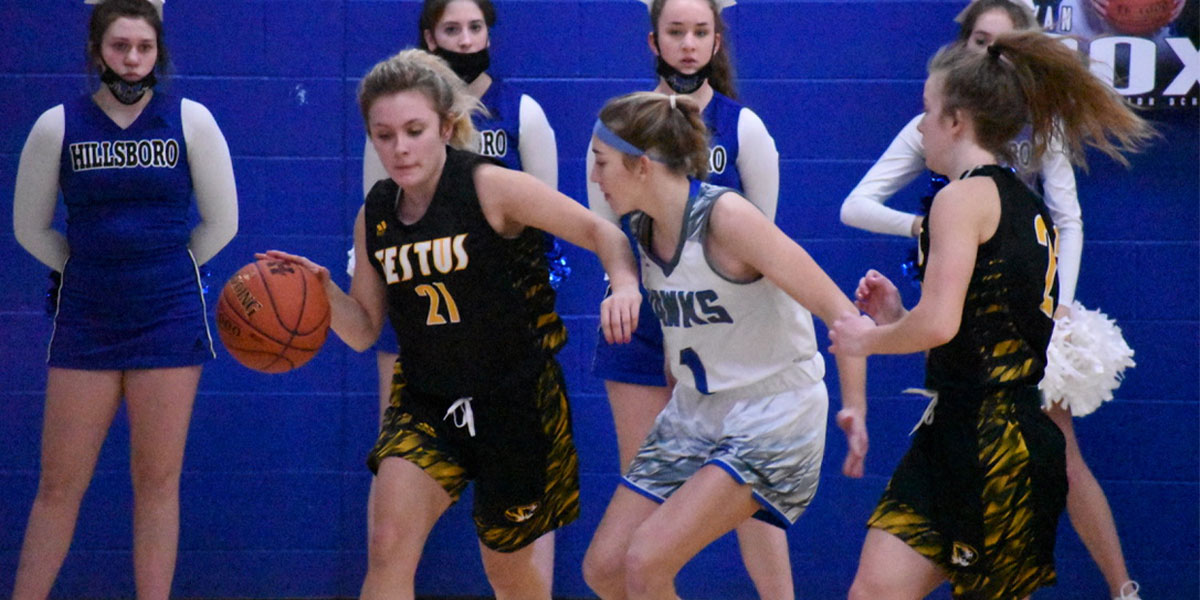 Festus Loses to Hillsboro for First Time Since 2013

The Festus Tigers lose to the Hillsboro Hawks 41-35 on Thursday. The Tigers are now 7-7 as the season winds down and they prepare for the district tournament.

The Festus Tigers Girls Varsity basketball team fell to the Hillsboro Hawks 41-35 on Thursday. The last time the Tigers lost to the Hawks was way back in 2013.

The first quarter started a bit slow for both sides. Festus had some unforced errors that resulted in turnovers. Hillsboro had some difficulty finding good shots and dealing with the Tigers’ pressure from their press. Then both sides ramped up their offense in the second quarter. Hillsboro held a slight edge, but Festus continued to close the gap. Ultimately, the Tigers trailed 24-20 at halftime.

“We were slow on offense starting out,” Emily Holt said. “We were forcing passes and were not utilizing the posts as much. We weren’t making easy shots that we should normally make.”

The shot-making struggles continued into the second half for the Tigers. They had a very tough time finding the bottom of the net as a team. They shot 24.6 percent from the floor overall and just 22 percent from three-point range. The Hawks capitalized on Festus’ mistakes and shot a much better percentage from the floor. Hillsboro made 16 of their 39 shots. Festus made 15, shots but on a healthy 61 attempts. The Tigers lost 41-35, and sunk their record to 7-7.

“We could have made some better passes and our defense wasn’t tight,” Tristan Foulk said. “We could have communicated more with each other.”

“We all could’ve shot the ball better,” Allen said. “And taken better shot selections in the second half.”

The Tigers previously won 11 straight matchups with the Hawks before Thursday’s loss, but to their credit, Festus has won five of their last seven games. As the regular season comes to a close their goal is to enter the district tournament prepared for the challenges at hand. Their preparation grows stronger with every game that passes on their schedule. The next challenge for the Tigers is Windsor. They have some time off before they take on the Owls next Thursday, Feb. 11th.

Festus Loses to Hillsboro for First Time Since 2013