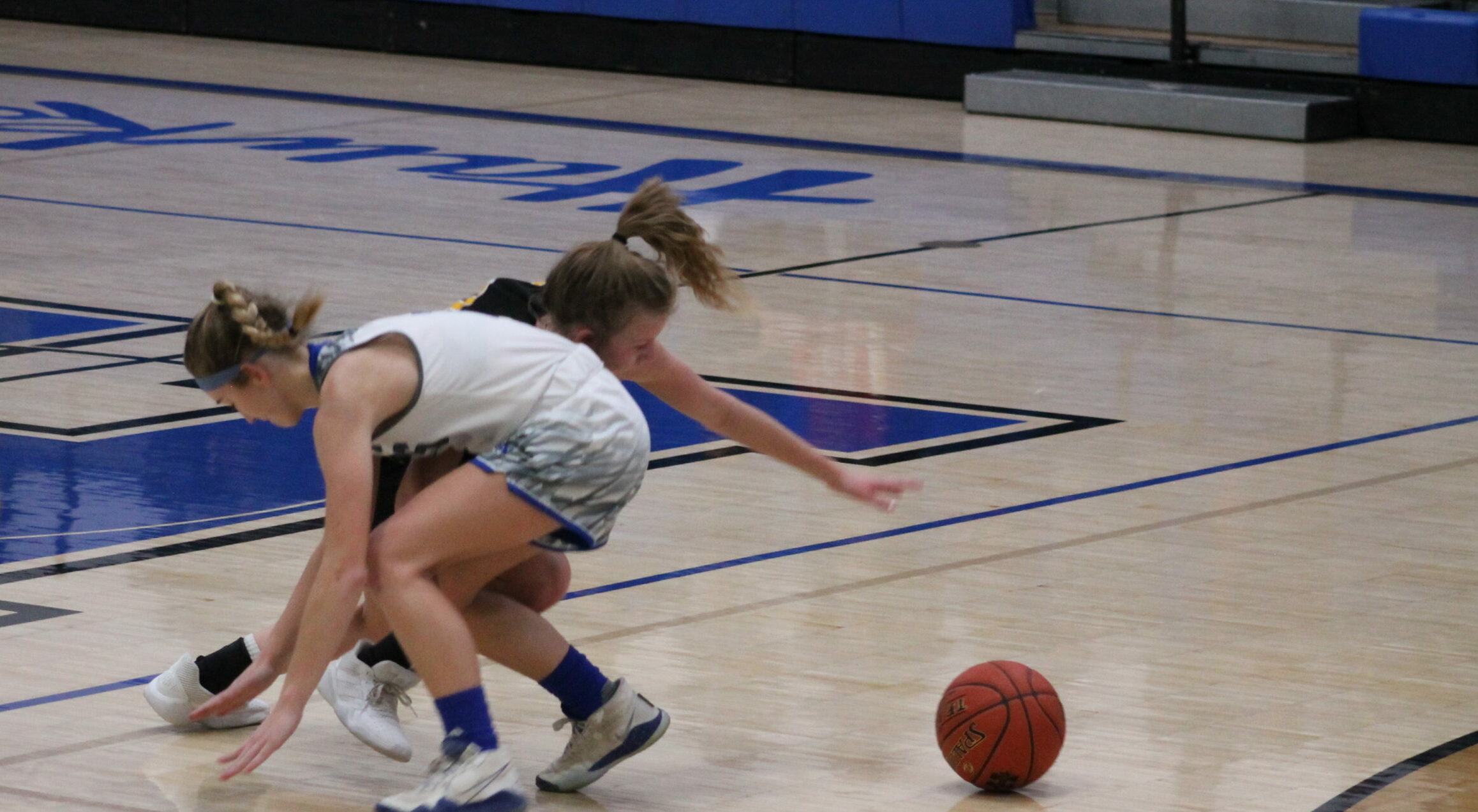 The Hillsboro Hawks Girls Varsity Basketball team has a rough go of it in their home tournament, falling in all three of their games, but they showcase many positives along the way. Including Kayla VanHorn being named to the All-Tournament Team.

Hillsboro’s Varsity Lady Hawks had a rough week in their own tournament, falling in three games. Despite the losses, each game had its highlights and good things to build on.

“We didn’t end the tournament in the place we should have and we definitely have a lot to work on, but there were many good things we did this week,” Sara Stokes said.

The Hawks opened the tournament looking to prove themselves against the Herculaneum Black Cats. Hillsboro dominated the first half, going up 12-7 in the first quarter and 33-22 in the second. A strong defense kept the Black Cats out of the paint, while the Hawks’ offense flew by their press and swung the ball to get a number of open shots.

Coming back from half, the Black Cats pulled off the press to try and stop some of the drives the Hawks had gotten in the first half. Unfortunately for them, the Hawks remained patient on offense and found the gaps needed to add more points to the scoreboard. The Hawks commanded a 47-36 lead heading into the fourth quarter.

The fourth quarter curse struck again, however. Herculaneum brought back the press, this time achieving their goal of making the Hawks rush. A breakdown in the defense didn’t help the Hawks either, as they let the Black Cats tie the game with less than four minutes left.

It became a back and forth, with both teams trying to put up the game winning basket only to have the other answer with their own. Herculaneum managed to break ahead, scoring six in quick succession and left the Hawks 30 seconds on the clock to try and answer. An additional basket cemented their 68-60 victory over the Hawks.

Despite the loss, it was still a strong scoring game for the Hawks, with Kayla VanHorn leading the team with 20 points, Zoe Wood with 17, Bailey Scallet with 12, Kaylee Hilton with six and Dyllan Day with five.

The Hawks went into the second game hoping for a spot in the consolation game. This time facing Seckman, despite a slower start, the Hawks still found the gaps needed to sink shots and ended the quarter with a 9-4 lead.

The second quarter was Seckman’s turn to figure out the defense. The Hawks had trouble stopping pull-up shots, but retaliated with a patient offense that swung the ball, creating wide open shots for their outside shooters. They retained a narrow 21-20 lead heading into the second half.

The third quarter passed in much the same fashion as the first two. The Hawks’ outside shooters stepped up and made themselves threats on the court, while the defense had some miscommunications that lead to points for Seckman. The starts of the fourth quarter would greet the Hawks with a 31-27 lead.

Seckman was determined to stay in the game though. The Hawks struggled to stop the pull-up shots that had plagued them earlier, this time with the added challenge of lucky outside shots. Those lucky shots let Seckman tie the game with half the quarter remaining. The Hawks had chances from the charity stripe to win back the lead, but the misses would ultimately come back to bite them.

Both teams kept the score deadlocked as the quarter went on. Overtime seemed inevitable until a last minute, desperate shot from Seckman handed the Hawks a 37-35 loss.

Scorers for the night included Hilton with eight, VanHorn with seven, Stokes and Day with six, and Wood and Scallet with four.

An early game Saturday morning didn’t help the Hawks as they played their final of three contests. Fox caused trouble for the Hawks right from the start with a press, earning the first points of the game. Hillsboro eventually got into a rhythm, scoring a bucket from beating the press, but the press wasn’t the last of Hillsboro’s worries. Errors on offense and defense turned into baskets for the Warriors and the Hawks found themselves down 16-11 after the first.

“I think the team needs to work a little more on breaking a press,” VanHorn expressed. “We have been working on it a lot more during practice and I think we might have it down for future games.”

The Hawks woke up the second quarter, with the defense coming alive. The offense also picked up the pace as fouls piled up for Fox, sending the Hawks to the line for bonus shots. Halftime arrived with the Hawks at a manageable 28-24 deficit.

Hillsboro started the third quarter with phenomenal defense, adjusting well to the change-ups in the Fox offense. Unfortunately the Hawks’ offense floundered momentarily when Fox upped the intensity on their press, and Hillsboro went into the fourth down 39-33.

The Hawks played all the way to the end, but couldn’t put up enough baskets to overtake Fox. Day paced the quarter, putting up a whopping ten points., but the final score would be 55-47 in Fox’s favor.

Hillsboro had two girls break double digits with VanHorn and Day at 12. Wood added seven, Hailey Genge five, Hilton four and Scallet three to round out the night. VanHorn was also nominated for the All-Tournament team.

“When I was nominated for the all tournament team I was very surprised,” VanHorn said. “I wasn’t really expecting it. It’s nice to know that my hard work has paid off.”

The Hawks return to the court February 4th at Festus. Tip-off is at 7:00 p.m.