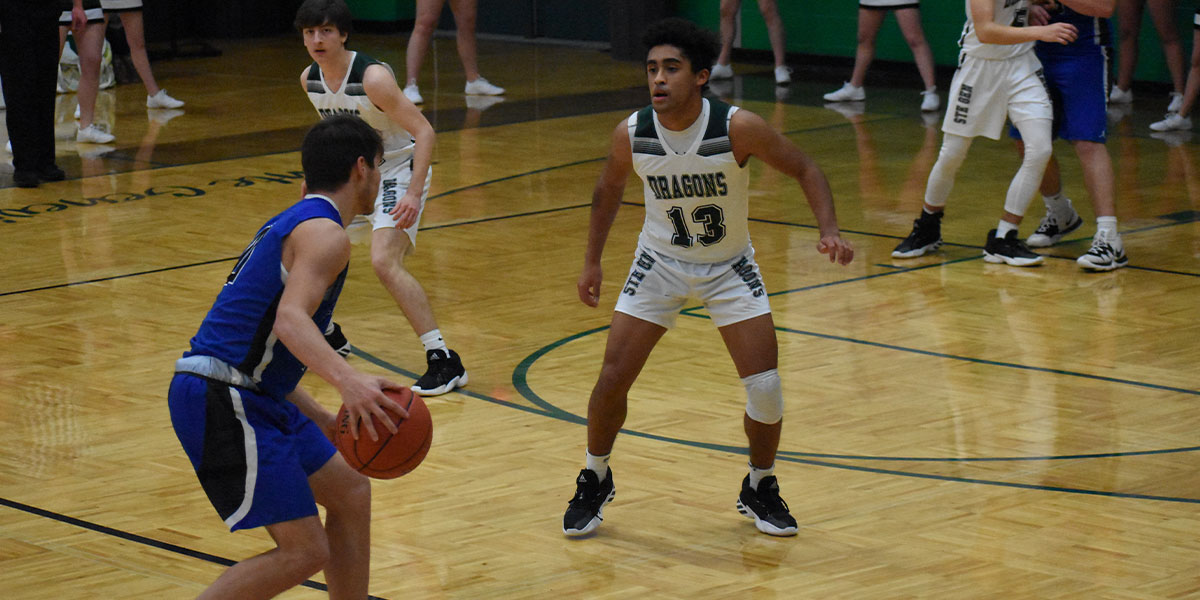 The Ste. Genevieve Dragons bounce back from their loss to North County and beat the Jefferson R-7 Blue Jays 55-35 on Saturday. The Dragons are 4-2 against R-7 dating back to 2015.

The Ste. Genevieve Dragons Boys Varsity basketball team bounced back from their loss to North County with a win over the Jefferson R-7 Blue Jays on Saturday. The Dragons are 4-2 against the Blue Jays dating back to 2015.

Ste. Gen. started slow and fell behind early, but the bright spot in Rudy Flieg scored three of his team’s eight first-quarter points. The Blue Jays scored 12 in the first and held a four-point lead at the start of the second quarter.

The Dragons’ offense then came alive in the second. Aiden Boyer made it his mission to get to the free-throw line. He went 7-8 from the charity stripe and scored nine points total in the quarter. Ricky Hunter hit a three and Flieg helped out with three more points. Ste. Gen. outscored Jefferson 19-10 in the second and took a 27-22 lead into halftime.

“In the first half, I think we allowed them to run their offense too easily,” Head Coach Rob Coleman said. “We also came out and shot the ball better from the outside in the third quarter. In the first half, we struggled from three-point range, but got the ball inside and were able to draw some fouls.”

The Dragons continued to see offensive success into the third quarter. Hunter had the hot hand and drained three shots from three-point land. Blake Morganthaler and Logan Trollinger each hit a three as well. Boyer added four more points to his total, as the third was the best quarter of the night for the Dragons. Not only did they have their best scoring quarter with 23 points, but held Jefferson to only one basket.

“Our second-half defense was good,” Landon Rose said. “We held them to two points in the third quarter and that was a big help.”

Ste. Gen. held a commanding 50-24 lead at the start of the fourth quarter. R7 had the scoring edge in the final eight minutes, but it was too little too late. Ste. Gen. wrapped up the 55-35 victory and improved their record to 13-6. 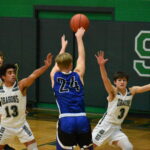 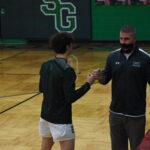 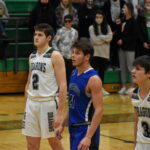 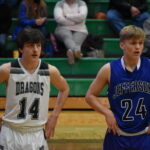 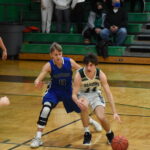 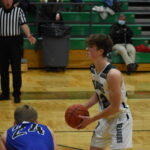 “Our guys did a good job coming back after a tough loss the night before against North County,” Coleman said. “Our defense was pretty decent most of the game, but the third quarter we came out with a lot more pressure.”

Hunter led the team with 14 points, and hit four shots from three-point range. Boyer was just behind with 13, as he went 7-8 from the free-throw line and collected ten rebounds. Trollinger and Flieg each finished with six points. Trollinger also had five rebounds, four assists and four steals. Flieg had five rebounds and two steals. Thomas O’Brien and Rose each contributed four points as well.

“We had great energy from the bench,” Hunter said. “Which helped us click offensively and defensively.”

The Dragons have won eight of their last nine games since losing two straight in the Christmas tournament. It seems Ste. Gen has found a rhythm and continues to play their own brand of basketball.

The next challenge for the Dragons is against Park Hills Central on Tuesday, Feb. 2.