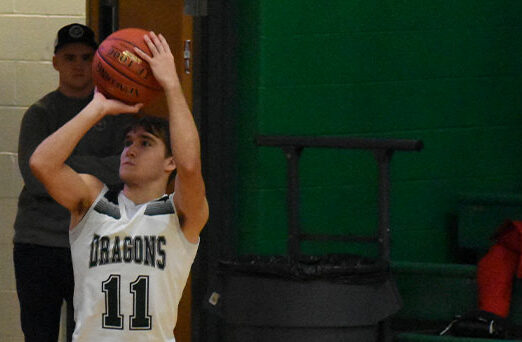 The Ste. Genevieve Dragons Boys Varsity Basketball squad beats St. Vincent 59-55 on Tuesday and improves to 12-5 on the season. The Dragons now hold four consecutive wins over the Indians, dating back to 2018.

The Ste. Genevieve Dragons Boys Varsity basketball team beat the St. Vincent Indians 59-55 on Tuesday for their seventh win in a row. The Dragons have beaten the Indians four consecutive times dating back to 2018.

This game was a back and forth battle from start to finish. St. Vincent held the upper hand early and outscored the Dragons 17-12 in the first quarter. Ricky Hunter, Blake Morganthaler and Thomas O’Brien all made threes to help the Dragons’ offense along.

Ste. Gen. then settled in and ramped up their offense in the second quarter. Logan Trollinger went to the free-throw line seven times and converted on five of his attempts. O’Brien added four more points to his total as well. The second frame saw 20 points from seven different Dragons. They also held St. Vincent to just eight points, and went into the half leading 32-25.

Ste. Gen’s offensive success from the second quarter continued into the second half. Hunter hit two more threes and Aiden Boyer scored six in the quarter as well. St. Vincent had a bit more success offensively, but still trailed the Dragons by ten at the end of the third.

However, the Indians began to mount their comeback. They held the Dragons without a field goal in the fourth quarter and scored 14 points themselves. Ste. Gen. took care of business from the charity stripe though and converted on eight of their 12 free-throw attempts. The Dragons locked up a 59-55 win that bumped their record to 12-5.

“They had a lot of size and length. They did a good job of attacking our guards inside,” Head Coach Rob Coleman said. “Our boys did a good job of making some adjustments and our defense picked it up. We also did a great job of moving the ball against their zone and getting some good looks.”

Hunter led the team with 14 points and hit four shots from beyond the arc. Trollinger was just behind with 13 points his own, going 8-11 from the free-throw line. Boyer finished with eight points and O’Brien ended with seven. Morganthaler hit a pair of threes and Carter Klump contributed five points of his own. Overall, Ste. Gen shot 46 percent from the field and 38 percent from three-point range.

“The team has been bringing energy every night to help keep our win streak alive,” Hunter said after the win.

After losing two games in a row in the Park Hills Christmas tournament, the Dragons have been on a warpath. Seven-game win streaks don’t come around often and this team is motivated to keep the streak alive.

When asked about the team’s success, Landon Rose quipped, “I’d say playing hard in practice. We have been playing good defense, and also playing all four quarters the best we can.”