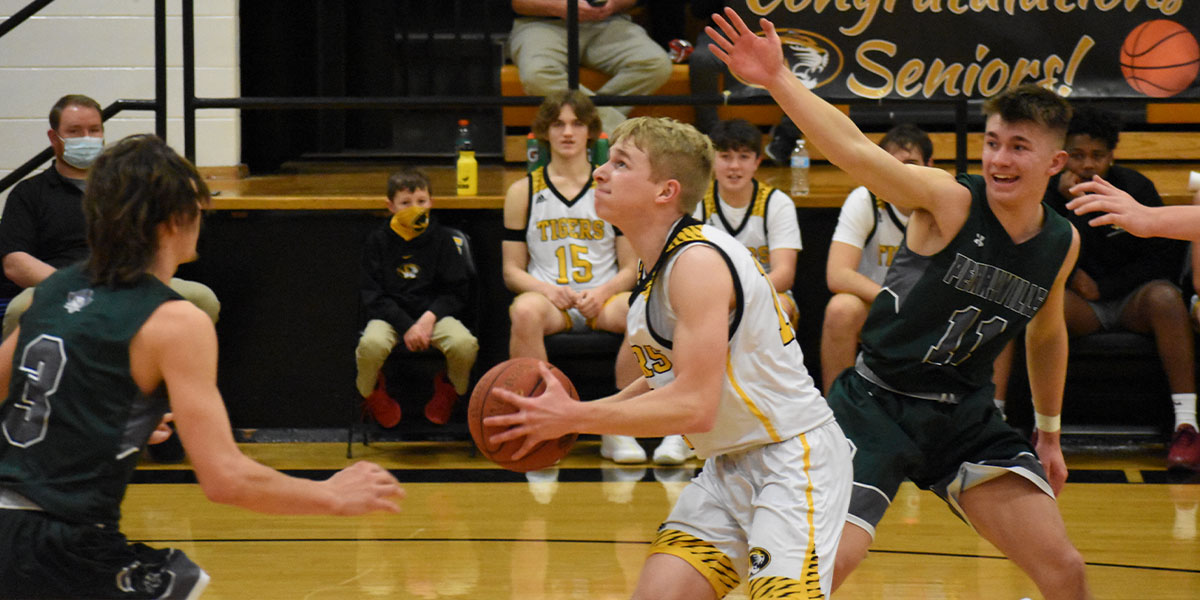 Festus Struggles Against Farmington, Bounces Back Over De Soto

The Festus Tigers fall to Farmington, but get back on track with a win over De Soto. The Tigers are now 14-5 with six games left in their regular season.

The Festus Tigers  Boys Varsity Basketball team lost their five-game win streak on Tuesday with a loss to the Farmington Knights, 82-54, but bounced back with a win over the De Soto Dragons 59-54, on Friday.

Festus ran up against a buzz saw in Farmington. The Knights controlled the game from the opening tip.

The Tigers only managed nine points in the first quarter, while Farmington exploded for 34. The Tigers trailed by double digits at the start of the second, as Festus tried to gather themselves.

And they did… as Collin Weinhaus hit three shots from three-point range and Arhmad Branch scored six. They outscored the Knights 18-14 in the second, but unfortunately still trailed 48-27 at the half.

Festus continued to struggle in the second half, despite Branch scoring seven more in the third to try and keep his team in it. The Knights outscored the Tigers 23-15 in the third quarter and took a comfortable lead into the final eight minutes. Festus outscored them in the fourth, but it didn’t matter. The Knights officially put a stop to the Tigers’ win streak and secured an 82-54 win.

“We didn’t close out on the shooters good enough,” Branch said. “But it’s  just a small setback and we’re going to work hard to get our streak rolling again.”

Branch and Weinhaus led the way for the Tigers with 15 points each. Connor Westhoff and JD McDowell each had six points. Garrett Tidwell, Logan Cash, Desmond Davis and Kaian Roberts-Day all had two points.

Then Festus came off of that loss prepared to bounce back against De Soto. Unfortunately for the Tigers, Branch was forced to sit out because of contact tracing due to COVID. Branch is Festus’ leading scorer and the rest of the Tigers would have to step up in his absence.

Festus is very familiar with De Soto. They faced each other twice this season already, both games were earlier in January. The Tigers knew what to expect and how to attack the Dragons.

They started the game ahead as Westhoff got himself going in the first with six points. Cole Rickermann and Cash each got themselves on the board with four points in the quarter as well, giving Festus a 17-8 lead after one.

The second quarter saw the Tigers slow down a tad and conversely, the Dragons pick things up. De Soto outscored Festus 13-11, but still trailed 28-21 at the half.

De Soto continued to straighten things out in the third. They had their biggest quarter of the day with 21 points, despite Rickermann scoring nine in the quarter and doing his best to help Festus cling to their lead. The Tigers were up by one going into the fourth quarter. Rickermann continued to score, and added five more points to his total in the fourth. Then Weinhaus added four in the quarter and Westhoff went 3-3 from the free-throw line. They helped secure the 59-54 victory that bumped their record to 14-5.

“It just goes to show that we have guys that are capable of stepping up when we need them to,” Collin Reando said. “Arhmad is definitely a big part of our team, but it was nice to see the team overcome the challenge of him not being there and to get the win.”

Rickermann took it upon himself to take a lot of the scoring load in Branch’s absence. He had 22 points to lead all scorers and was 8-12 from the free-throw line.

“We have a bunch of talented guys that can work together and produce on the court,” he said. “Arhmad is a huge part of our program and it was a real test not to have him playing with us.”

Westhoff was the only other Tiger in double-figures with 11 points. Davis, Reando, Cash and Weinhaus all had four points.

“Cole stepped up big time for us yesterday and led us to a big conference win,” Reando said. “Weinhaus and Westhoff played very well and even young guys like Logan Cash and Carter Roth did good things when we needed them to. It goes to show that we don’t have to rely on one individual, and also shows how well of a job coach Therrell is doing.”

Festus now has the upper hand in the season series against De Soto, winning two out of the three games they’ve played the Dragons. The way the Tigers bounced back from a loss with a big win, without their leading scorer, proves the Farmington game was just a hiccup.

Next, the Tigers take on the Hillsboro Hawks Friday, February 5.

Festus Struggles Against Farmington, Bounces Back Over De Soto