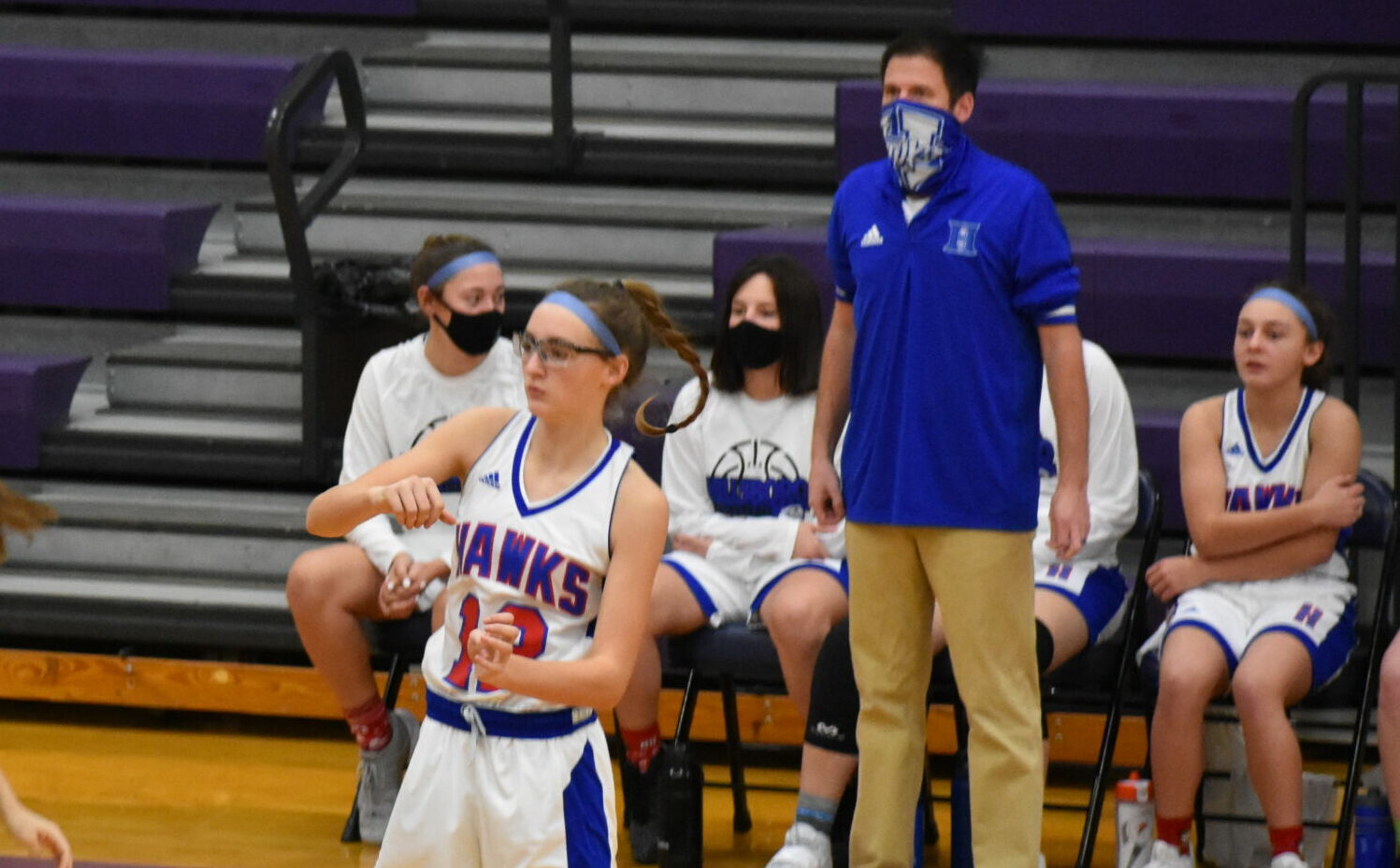 The Hillsboro Lady Hawks suffer disappointing loss to Windsor. The game was within reach in the final minute of regulation, but the Hawks couldn’t find the recipe for the win as they fell 38-32.

The new year hasn’t been kind to the Lady Hawks, as they’ve gone neck-and-neck with their competitors, falling slightly short of the finish line each time. Just like the Pius game, the Hawks shined at times and fought with tenacity to take over the game against Windsor, but ended up on the wrong side of the Win/Loss column, falling 38-32.

The first quarter started out extremely promising, in spite of a semi-slow offensive start.The Hawks had a hand on nearly every pass and several steals that led the way to some easy buckets. Hillsboro’s stellar defense was on display, when they couldn’t get a steal, they’d force Windsor to take questionable outside shots. Unfortunately for the Hawks, a few of the questionable shots fell.

As the first quarter progressed, Hillsboro started attacking the gaps putting together several nice drives to the basket. Kayla VanHorn started the night going two-for-two on free throws. You could tell this game was going to be a battle, even when the ball got loose, someone was diving after it. Windsor got off a last minute shot putting the Hawks down by one ending the quarter 11-10.

The second quarter saw the Hawks struggle, they couldn’t get shots to fall and Windsor grabbed a lot of rebounds. “Overall we didn’t make too many good passes and didn’t box out,” MJ Smith said. Windsor would go into the half with a 23-18 lead over the Hawks.

However, the game was far from over as Hillsboro came out from half time ready to go on the attack. They implemented their press, pushing the pace and keeping the Owls off balance. Remarkably, the only baskets Windsor would gain that quarter were off of free throws, as the Hawks outscored them 8-3, tying it up 26-26 going into the final quarter.

The Hawks kept it close in the final quarter, keeping the Owls on their heels. Hillsboro pushed the ball inside then swung it to VanHorn, giving her some good looks from the outside. Yet, it was Windsor regaining the lead off second chances under the basket and from the charity stripe.

It would all come down to the final minute when Hillsboro would bring the score to 34-32 with two made free throws from Dyllan Day. With the game in reach, Hillsboro stayed aggressive on the press, causing a big turnover, but couldn’t find the opportunity they needed to sink a bucket and tie it up. Windsor went on to add 4 more points, putting the game just out of reach for the Hawks.

“I feel like making adjustments was supposed to be a big part of the second Windsor game, and we just didn’t quite do that,” Zoe Wood said. “We needed to take what we did well from the first game and apply it to the second one. It is always harder to beat a team a second time, especially when it was such a close game the first time.”

Despite the loss, the Hawks would see VanHorn hit ten points, Day and Bailey Scallet with eight, Smith with four, and Wood with two. The team would go four-for-four at the line.

The Hawks now look to bounce back in their next game against Potosi. “We need to not be out hustled and to be in the game honestly,” Maddie O’Neil said. “I felt like as a team we were off.”