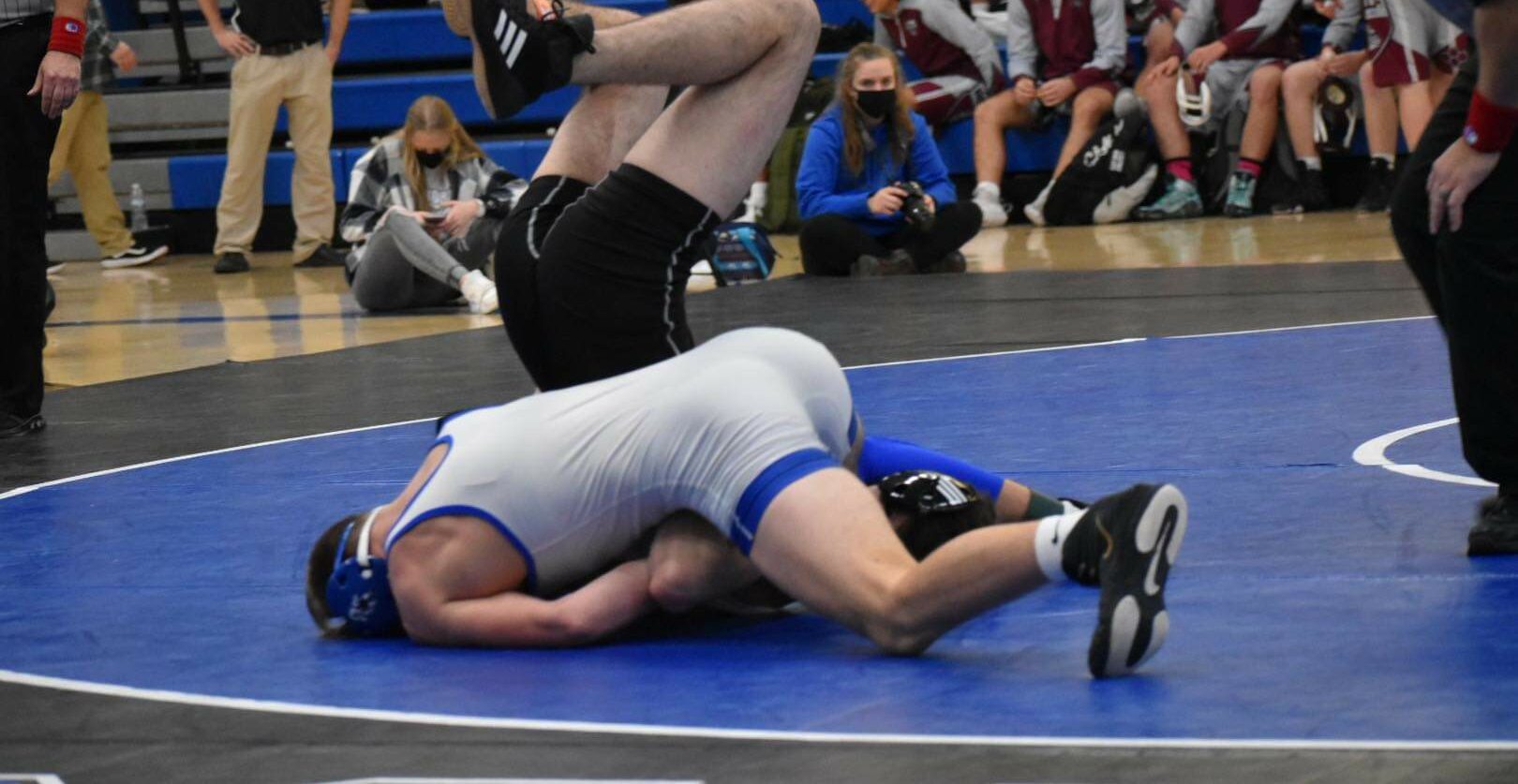 With a winning mindset helping to keep the undefeated streak alive, the Hillsboro Hawks Boys Varsity Wrestlers win in blowout fashion 51-9 against Ste. Genevieve. The Hawks are now a remarkable 22-0 on the season.

It was another successful dual for the Hillsboro Hawks Boys Varsity Wrestling Team on Wednesday, January 6, making for a memorable Senior Night. The Hawks mowed down the Ste. Genevieve Dragons and won the dual 51-9, putting their undefeated season at 22-0.

Of the 11 contested weight classes, Hillsboro won 10 matches, four by pin. Ste. Genevieve wrestled well, but ultimately the strength and experience of the Hillsboro squad got the job done. Head Coach Matt Mitchell commented, “We had a good Senior Night. Ste Gen is always a tough squad. We had some great matches and won the close ones.”

Starting off the dual was Aidan Black wrestling at the 113 lb. weight class. He scored a decision victory for his team 6-2. Aidan Haggard followed that up at 126 with a 4-2 decision win. Next was Sam Richardson wrestling at 132, who also won by decision, 9-2.

Mitchell commented on Haggard’s match, and noted, “Haggard performed well. He beat a returning state medalist. He wrestled hard the whole six minutes. He scored really late in the match to win and it was fun to watch. Aidan has been working really hard in the room, and it was nice to see that pay off for him on Senior Night.”

Litzsinger commented on his training and said, “Staying true to the grind and keeping my mind as freed up as possible has helped me. I like to keep a clear head and not worry too much. It helps me perform my best. I’m very proud of my team!”

Wrestling at 160, Griffin Ray stayed hot winning a major decision 10-1. Ray noted that he is ready for more, and commented, “I’m focused on continuing to climb and continuing to win.”

Nicholas Green, at 182, edged out a decision win 3-2. Green commented, “I was just focused on the match, and had a mind set that I was going to win!”

Mitchell was excited for McNees, and commented, “McNees had a great match. He was able to beat another quality opponent. We bumped him up to 220 on Senior Night so he could get a match. He beat a state qualifier from a year ago.”

There were also two girls wrestling matches. Marissa Hudman and Grace Johnson were both defeated. However, what they have done for the Hillsboro Girls Wrestling team has been remarkable. Mitchell noted, “Hudman and Johnson are the first ever Senior girls to go through our program. They both helped get it started three years ago. I know they didn’t wrestle as well as they wanted to against Ste. Gen, but we expect big things from them with districts in a few weeks.”

There were also seven exhibition matches that followed, and Hillsboro won three. Kaden Brown, at 152, won a major decision 13-1. At 170, Jacob Hooss pinned his opponent in 3:24, while Andrew Isaacson, at 195, won with a pin in 53 seconds.

Mitchell was pleased with how the night went, and said, “Overall I can’t ask for more from my group. It was fun to watch them and watch the team cheer for each other. We were focused and engaged. Right now it’s just about continuing to get better each day as we head into the final stretch of the regular season.”

The Hawks will look to keep the undefeated streak alive this Saturday, January 9 as they enter the Lafayette Duals Tournament.