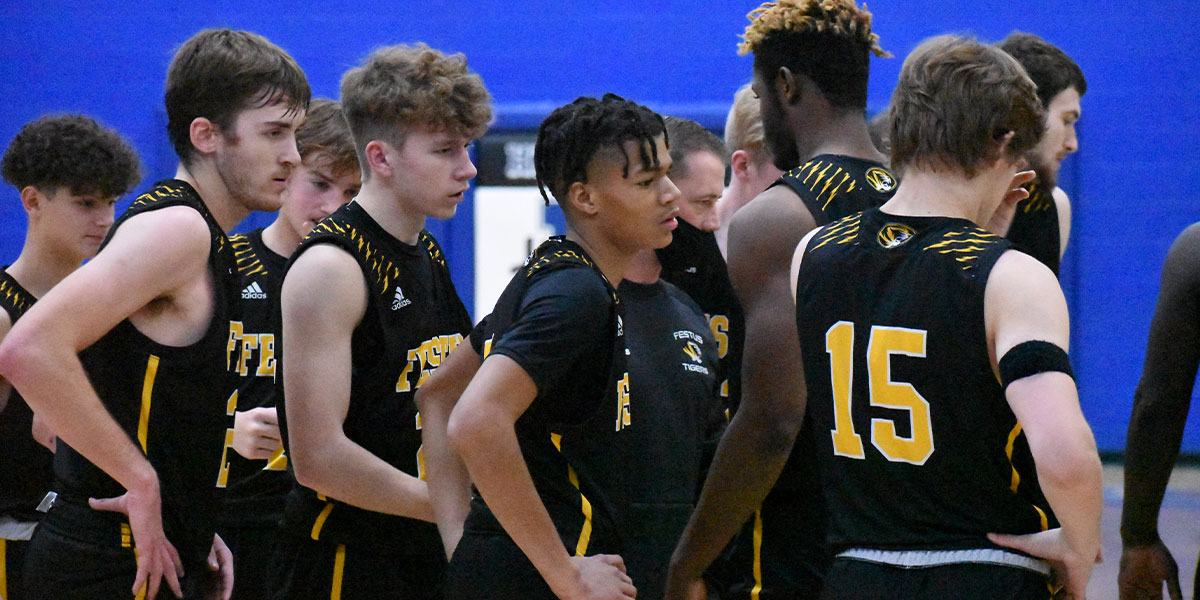 The Festus Tigers trounce the Fredericktown Blackcats 67-22 to pick up their sixth win of the season. With the win, Festus moves on to play the South Iron Panthers on Tuesday, Dec. 29.

The Festus Tigers Boys Basketballl team started the annual Bob Sechrest Jr. Christmas Tournament with a resounding 67-22 win over the Fredericktown Blackcats. Festus won the last three meetings with Fredericktown dating back to 2015.

Festus came prepared and had their foot on the gas from the moment the game was tipped off. Six different Tigers scored in the first quarter. Collin Weinhaus hit two three-pointers and Connor Westhoff helped with five points of his own. Festus scored 23 in the first and only gave up four points to the Blackcats. They built their lead in the second as Cole Rickermann made a three for his first and only points of the contest. JD McDowell chipped in with four points of his own, giving Festus a 35-11 at the end of the half.

The ball continued to find the bottom of the net for the Tigers in the second half as Festus’ offense was rolling. Westhoff hit two shots from beyond the arc on his way to eight third-quarter points, while Arhmad Branch added two baskets and a made free-throw. They were just two of the seven Tigers that scored in the quarter.

They also stayed locked in defensively and only allowed Fredericktown six more points. Festus went into the fourth quarter with what seemed like an insurmountable 60 to 17 lead, but the fourth was the least eventful eight minutes of the game. The Tigers won the quarter 7 to 5 and secured a 67 to 22 win, bumping their record to 6 and 2.

“We played good defense and got out to an early lead,” Head Coach Jason Therrell said.  “Arhmad Branch played a great floor game and lots of people contributed. We had good energy from our bench.”

Coach Therrell hit the nail on the head as ten different Tigers found a way to score in the game. Westhoff and Weinhaus led all scorers with 13 points. They also each hit three shots from three-point land. McDowell and Branch were just behind with eight points each. Desmond Davis had seven points, Collin Reando had six, Carter Roth had five and Hayden Bates and Ethan Carroll both had one basket as well.

Rickermann is normally one of the heaviest contributors for the Tigers in the scoring department. He only had three points in this game and chose to focus on getting others involved.

“I think I was a distributor today,” he said. “I didn’t score much, but I was able to get people their buckets. I feel like I played well but definitely need to try to cut down on the turnovers. I threw it away a couple of times.”

This was an all-out dominant effort for the Tigers. However, the tournament has just begun, and next up are the number one seed South Iron Panthers. The Panthers are a powerhouse program and the Tigers will certainly have their hands full.

This battle of top-tier talent tips off Tuesday, Dec. 29.