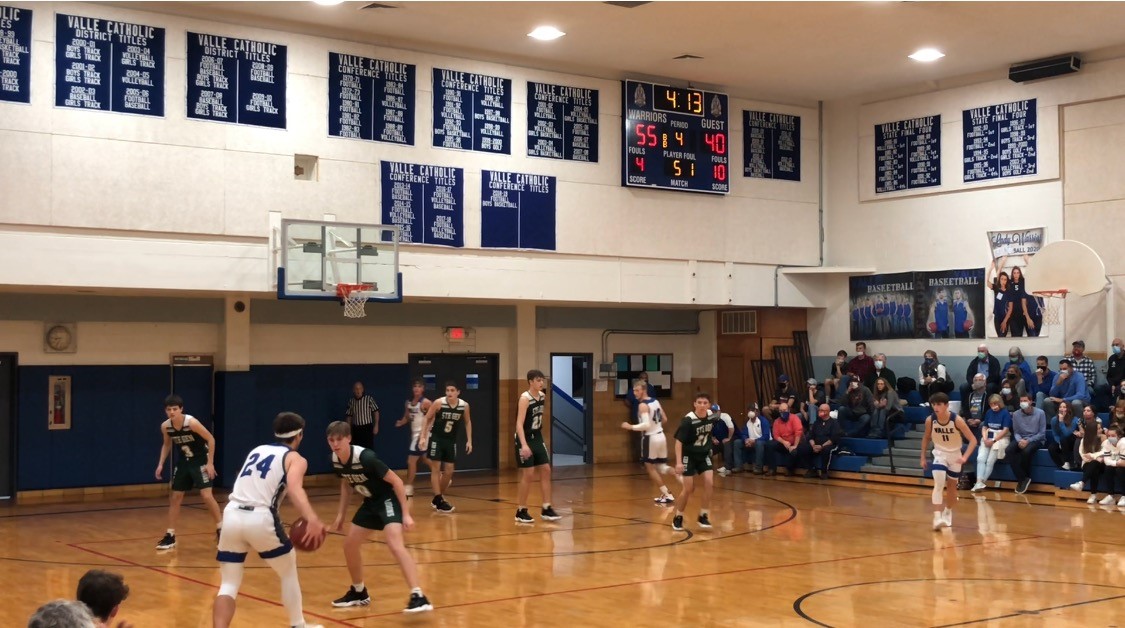 The Ste. Genevieve Dragons saw its four-game win streak get snapped as the Valle Catholic Warriors went on for the 68-54 win.

Ste. Genevieve Boys Basketball (4-1) took the two minute trek to take on crosstown nemesis Valle Catholic (3-1) Friday night. The Dragons were rolling on a four game win streak, but when these two teams meet their records, win streaks, losses all go to the wayside. This game was no different, Ste. Gen fought hard, but Valle won this battle 68-54.

“I thought offensively early we were looking good, but we got in some foul trouble right away and it took us out of our defensive game,” said head coach Rob Coleman. “Valley got a good lead and every time we made a run at them, they answered. They did a good job of taking care of the ball and hitting free throws. I thought our defense wasn’t what we are capable of playing. We didn’t do a good job on our rotations on the drive.”

In the first quarter, Ricky Hunter led the way for the Dragons after being fouled on a three point attempt Hunter drained all three from the charity stripe. Aiden Boyer and Chaytin Lea also got in on the action with two points apiece, but the Warriors were on top 15-7 and carried that momentum over into the second.

The second quarter saw contributions from Logan Trollinger and Blake Morganthaler for the Dragons, who scored six of the Dragons 10 points. As the first half wound down, the Warriors outscored the Dragons 15-10 to lead 30-17 at the break.

“The first half we were very passive, but the second half we got after it on defense and started being aggressive on offense, but we dug a whole we couldn’t get out of” noted Chaytin Lea.

After a back-and-forth third quarter, the Warriors still led 45-30. Hunter went off in the fourth, nailing four shots from beyond the arc, adding a couple buckets from the charity stripe, giving him 14 points in the fourth. The Dragons outscored Valle 24-23 but the comeback proved to be too great with the Warriors going on for the 14-point win.

“Not the best game, but I feel like we had a way better second half than first,” said Logan Trollinger. “We need to keep the ball in front of us on defense better and get off to a better start.”

Ste. Genevieve finished shooting 36.5 percent from the floor and 50.0 percent from the charity-stripe. Ricky Hunter led with a team-high 20 points on 5-of-11 shooting. Trollinger was the final player in double-figures with 10.

Valle Catholic, meanwhile, shot an impressive 52.4 percent from the field and went 20-of-33 (60.6 percent) from the free throw line. The Warriors also dominated in the paint with a 36-20 advantage.

Anthony Nash commented after the game,  “I don’t feel like we did much well, but next game we need to stop the dribble drive and make sure to keep them off the free throw line.”

Carter Hoog was the story for Valle, with a dominant double-double performance totaling a game-high 38 points and 12 rebounds.