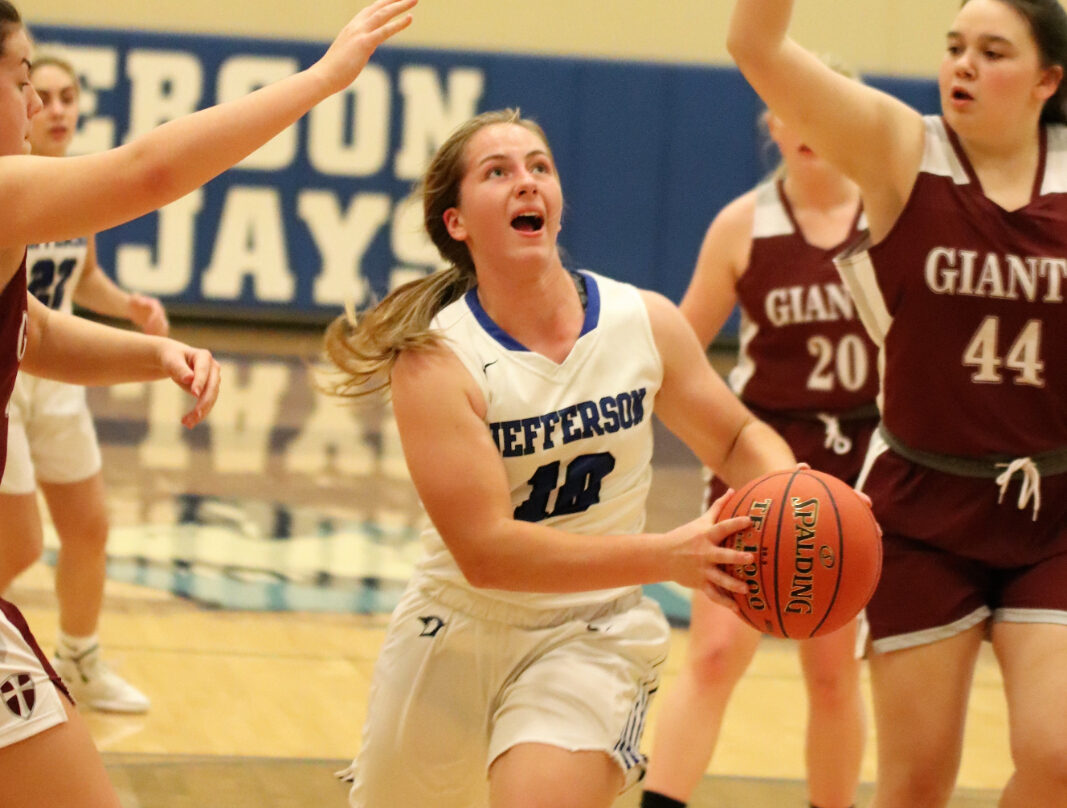 The Jefferson Blue Jays Girls Varsity Basketball Team shine at home against the St. Paul Lutheran Giants with a clutch 48-44 win, courtesy of a 20-point third quarter and a huge game from standout Catryn Cattoor.

The Jefferson Blue Jays Girls Varsity Basketball Team (2-2) played host to the St. Paul Lutheran Giants (2-3) in their second matchup against the Giants this season. The Blue Jays fell behind early, trailing by double-digits at the half, but a massive comeback in the second half gave Jefferson a 48-44 victory.

“Great team effort tonight from the girls,” said Head Coach Zac McVey. “Brittany Bittick played outstanding defense at the top of the zone and limited their best player to four second half points. Catryn Cattoor continues to use her strength and speed to attack the rim. Laney Smith made some excellent decisions and knocked down some big shots down the stretch.”

He continued, “We still have to get better at handling the ball, especially under pressure. But we were down 10 going into halftime, and the girls went on something like a 24-4 run through the third and start of the fourth quarter. It’s nice to see the girls battle, I’m seeing growth as individuals and a team. The faster they recognize situations and make quality decisions, the sooner they’ll take off as a team.”

After St. Paul Lutheran led 9-8 in the first quarter, the Giants expanded on their lead with a dominant 18-9 performance in the second to lead 27-17 at the break.

The Blue Jays weren’t going down without a fight though, and it was evident with their third-quarter performance that they were here to win. Jefferson scored 20 points in the third and shut down the Giants’ offense, allowing only four points the entire quarter. Now armed with the lead, the Blue Jays held off a final run from the Giants late in the fourth quarter to take a 48-44 win.

“We were slow to start in both of our games this week but winning against St. Paul came down to the third quarter,” said Cattoor. “My team came out with more energy, took the lead, and held onto it. Our defense led to offense, and we allowed that last half to become a whole team effort.”

The Blue Jays shot 42.2 percent from the floor and were led by Cattoor’s season-high 20-point and 11-rebound performance. Laney Smith added 11 points, while Peyton Weiler came through with seven.

“I thought the St. Paul game was a great team effort,” said Weiler. “We all played a role, especially in creating our own energy on the bench. Desoto was a tough team, and I think having that loss earlier this week taught us valuable lessons and motivated us to work even harder at practice. Going into the game on Thursday, we were determined for some redemption after losing to St. Paul in the Valley Caledonia Tournament. I’m proud of our team and our ability to take some small wins from our losses, especially during this unprecedented time.”

On the opposing side, Grace McMillen led with a team-high 16 points, while Brylee Durbin added 11 for the Giants.

The Blue Jays are back in action on Dec. 14th when they’ll be tested against undefeated West County (4-0).