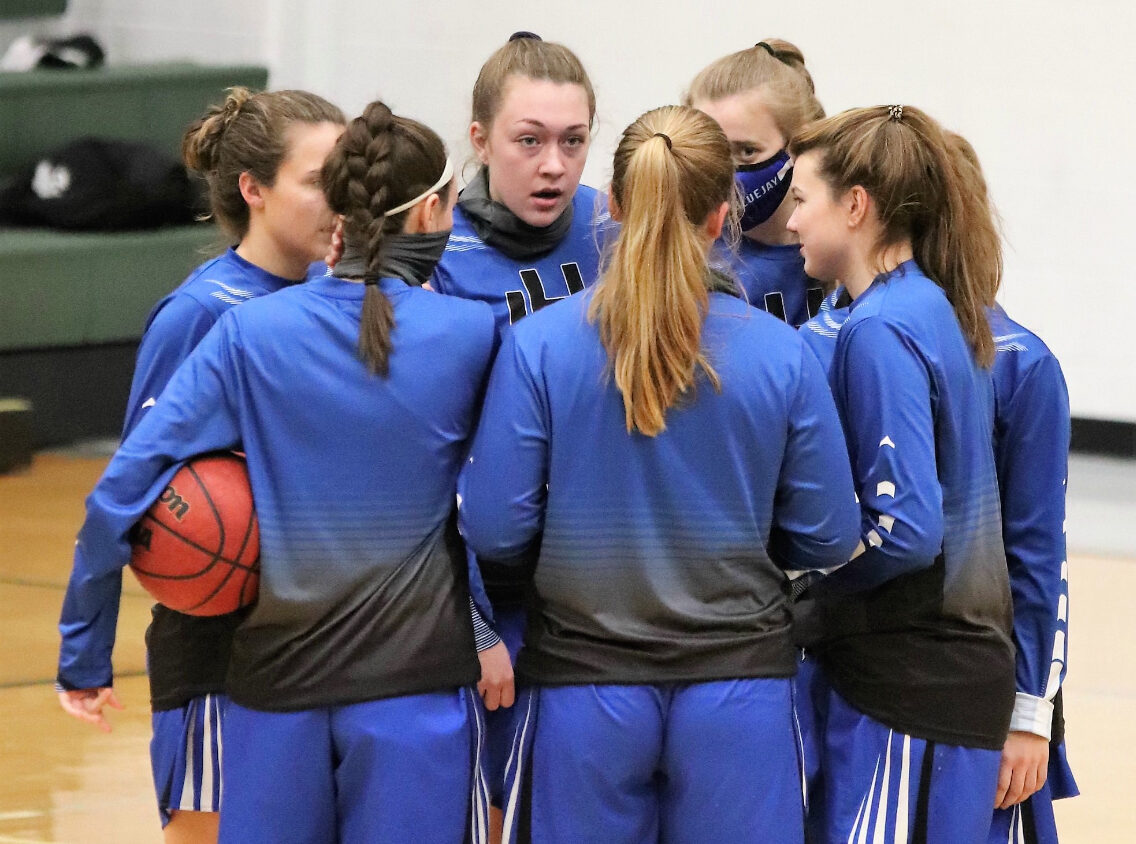 The Jefferson R-7 lady Blue Jays fall behind early against the De Soto Dragons, but mount a thrilling fourth-quarter comeback to cut the deficit to just three. Sadly, they fall just short, getting edged out 45-42.

The Jefferson Blue Jays Girls Varsity Basketball Team (2-1) were looking to win their third straight game Monday night when they took to the road to take on the DeSoto Dragons (1-2). Jefferson fell behind early, but after mounting a fourth-quarter comeback, Blue Jays cut the deficit to three.  Sadly, it ended there as they fell just short, losing 45-42.

The Blue Jays have had a strong opening to the season, winning the consolation finals of the Valley Caledonia Tournament, and were currently on a run of back-to-back wins. The Blue Jays had a lot of reasons to be optimistic, as last year they took down their Monday night opponent, DeSoto high school, three times throughout the season.

The Blue Jays didn’t get the start they were looking for though, as they fell behind 12-8 at the end of the first quarter. Jefferson’s offense continued to struggle entering the second quarter, putting up just four points and entering the half down 21-12.

The Jays’ offense began to come to life in the second half, but entering the fourth quarter, they weren’t able to reduce their deficit, still trailing, 32-24. Then something clicked. The fourth quarter saw an offensive explosion from the Blue Jays, as they began to chip away at the Dragons’ lead dramatically. But in heart-breaking fashion, they just ran out of time, and DeSoto narrowly escaped with a 45-42 win.

Head Coach Zac McVey talked after the game about how the first half is what held his team down on Monday night.

“It was a tale of two halves Monday night,” McVey said. “We seemed slow and unsure of ourselves on both sides of the ball in the first half. Too many unforced turnovers cost us the game.”

Senior Laney Smith led the way for the Blue Jays in the scoring column, finishing with a team-best 14 points on 6-20 shooting from the field. Smith did more than just score, having a great night on defense as well with four steals and two blocks, three rebounds and two assists.

Another Senior, Catryn Cattoor, put together a double-double performance for Jefferson, scoring 12 points and grabbing 11 rebounds. Cattoor did this on an efficient evening of shooting, going 5-of-7 from the field and 2-for-4 from the free throw line.

Another bright spot performance for Jefferson came from Brittany Bittick. Bittick may not have made her presence known on the scoring sheet, as she finished with four points, but her defense made her one of the best performers on Monday night.

After the game, Bittick said the team just couldn’t hit shots, and that’s why they ended up on the wrong side of the game.

“Our shots didn’t go down like we hoped,” Bittick said.

The Blue Jays, now 2-2, will have a shot to get back to their winning ways on Thursday, December 10, when they take on the St. Paul Lutheran Giants (2-3).