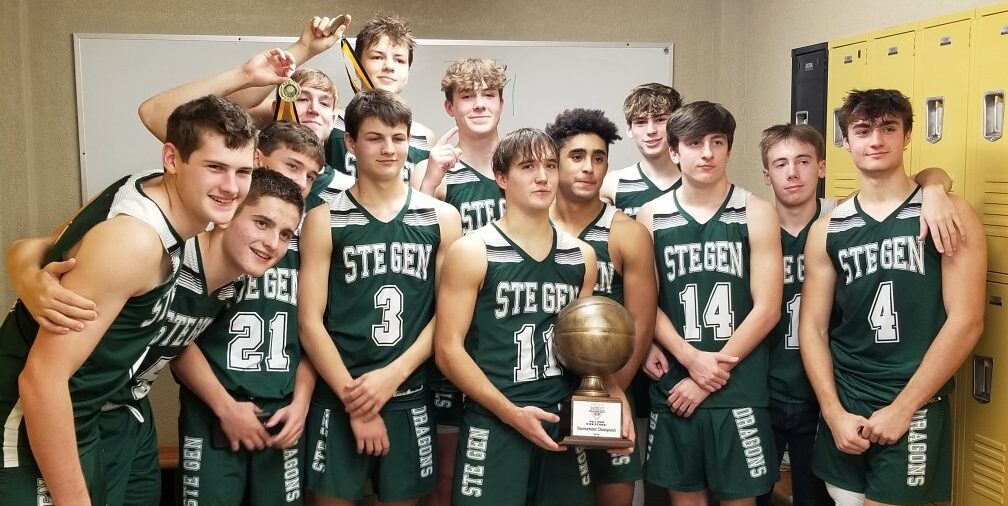 With some heroics from Tournament MVP Logan Trollinger the Ste. Genevieve Dragons Boys Varsity Basketball squad capture the Sullivan Bank It Tournament Championship. A 61-54 win, showcased by a crazy fourth quarter, has these Champion Dragons now sitting at 3-1 on the young season.

After back-to-back wins, the Ste. Genevieve Dragons Boys Varsity Basketball team (2-1) had the opportunity to take home the Sullivan Bank It Championship Friday night when they took on the Farmington Knights (1-0) in the final round of the tournament. Thanks to a quick start from the Dragons, Ste. Genevieve was able to control the pace for the majority of the game and snag the win 61-54.

Thursday night, the Dragons won a tight battle against the Potosi Trojans, and their Friday night matchup featured just as challenging a foe, in the form of the Farmington Knights. The Dragons have struggled against Farmington in past years. Last season they went 0-3 against the Knights, and you have to go back to the 2015-16 season to find the last time they managed a victory against Farmington.

Ste. Genevieve made it clear from the start they weren’t like those past teams, quickly jumping out ahead to a 19-8 lead by the end of the first quarter. Sophomore Ricky Hunter had a tremendous first quarter for the Dragons, knocking down three three-pointers to give him nine of the Dragons’ first 19 points.

Farmington cut into the Dragons’ lead in the second quarter but at halftime, Ste. Genevieve still led 29-23. Hunter was still leading the way in scoring for the Dragons, moving his total to 10 by the half, but Logan Trollinger wasn’t far behind with eight points of his own.

The beginning of the second half showcased some offensive struggles for both teams, as they each struggled to score during the third quarter, but that all went out the window in the fourth. Both teams put up 21 points, but the Dragons held on to take a 61-54 win.

After the game, Head Coach Rob Coleman said he was proud of his team’s ability to control the pace Friday night.

“We did a great job of controlling the game and answering every time Farmington made a run at us,” Coleman said. “I was very proud of their determination all week, going into a new tournament, being the sixth seed, they showed a lot of mental toughness.”

Trollinger’s performance on offense put the Dragons over the top, leading the game in scoring with 22 points on 5–of-8 shooting and 7–of-10 from the free-throw line. This performance, along with Trollinger’s high level of play throughout the tournament, earned him the Most Valuable Player award of the Sullivan Bank It Championship.

Trollinger credited his and his team’s high level of play to their work ethic in practice.

“I think that us competing in practice every day against each other really sets us up for success when it comes game time,” Trollinger said.

Hunter put in a strong performance alongside Trollinger, finishing the game with 13 points on 4–of-6 shooting, hitting 4–of-5 of his three-point attempts, and going 1-2 at the free throw line.

Like Trollinger, Hunter credits the team’s preparation prior to the game as essential to victory.

“The intensity and teamwork we had down the stretch of those games helped us succeed,” Hunter said. “Preparing for the games was key for us to know what we are going to do.”

While Trollinger was the tournament’s MVP, Chaytin Lea and Rudy Flieg were both named to the All-Tournament team. Lea finished Friday night’s game with seven points on 3-of-5 shooting and added a rebound and an assist to his name. Flieg managed to get five points on the board, going 1–2 from the field and 3–of-4 from the free throw line. He also contributed three rebounds, three assists and a block to boot.

With the Sullivan Bank It Championship now concluded, the Dragons will look to improve on their 3-1 record Tuesday when they head to Saxony Lutheran High School to take on the Crusaders.