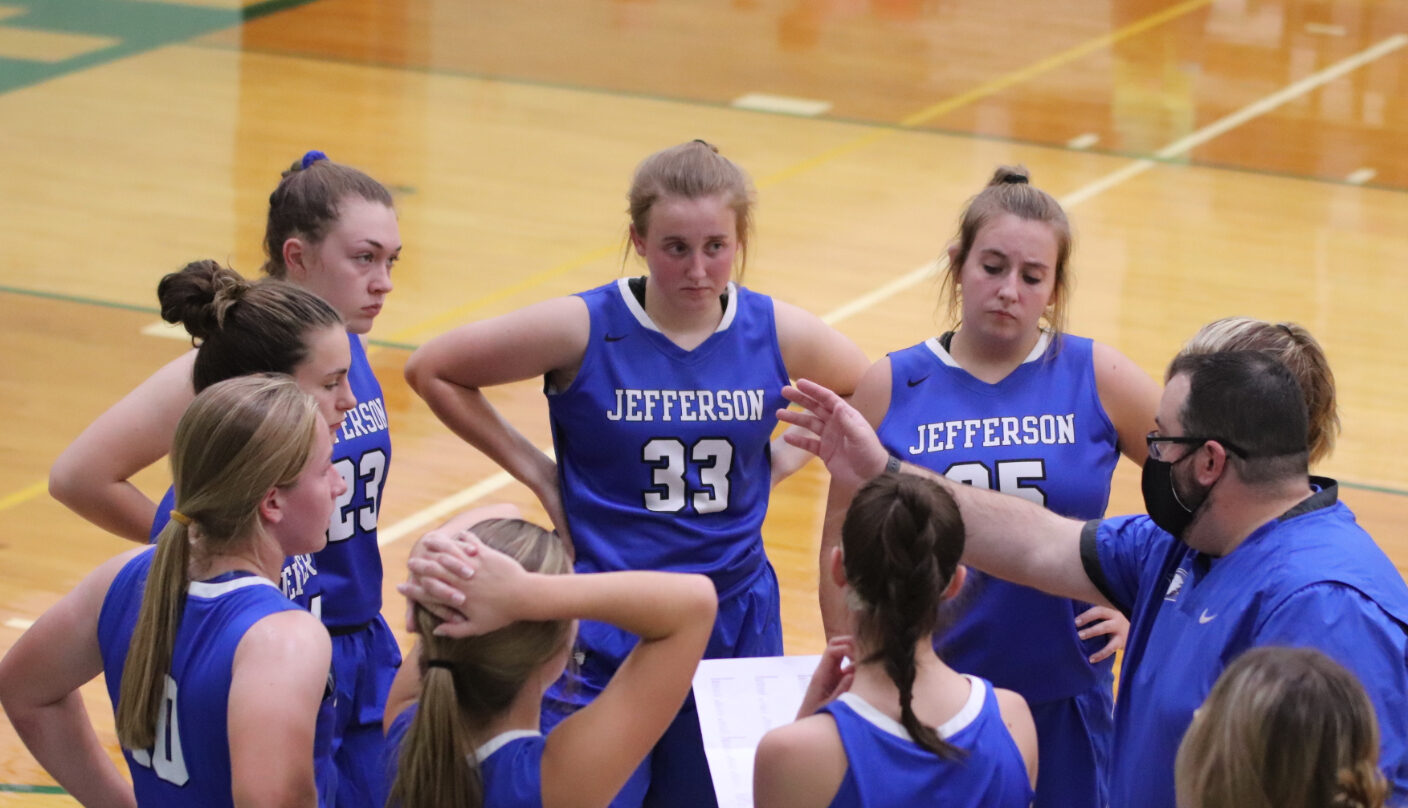 The Jefferson Blue Jays Girls Basketball team stumbles in their season opener against the St. Paul Saints Saturday in the Valley Caledonia Tournament. Despite strong performances from Catryn Cattoor and Morgan Fuller, the Blue Jays can’t pull off the win, falling 47-40.

The Jefferson Blue Jays Girls Basketball team opened their season Saturday afternoon with a first round match in the Valley Caledonia Tournament against the St. Paul Lutheran Saints. The Blue Jays fell behind early, and despite a strong second half, Jefferson couldn’t complete the comeback… falling 47-40.

The Blue Jays came into the 2020-21 season opener looking to continue their strong run of play that saw them end last season, winning four of their last six games to end with a 13-13 record. The Blue Jays were looking to get off to a good season opener against St. Paul Lutheran; a school Jefferson hasn’t faced off against since 2015-16 where they took home a 55-23 win.

The Blue Jays got off to a shaky start, falling behind the Saints in the first quarter 15-6. Senior Catryn Cattoor was responsible for half of Jefferson’s points, scoring an and-one layup for three first-quarter points.

Jefferson kept it closer in the second quarter but still couldn’t chip into their deficit, entering halftime trailing 24-13. At the half, Cattoor remained the Blue Jays leading scorer with six points, with Junior Reagan Kennedy contributing four points.

Jefferson finally began to cut away at the Saints’ lead in the third quarter, thanks to six points from Cattoor and a big three from Senior Morgan Fuller. This newfound life in the Blue Jays offense cut the lead to just five, with Jefferson trailing 31-26.

The Blue Jays offense remained strong in the fourth quarter, with six big points from Fuller helping to tie the game late. Sadly, Jefferson couldn’t contain St. Paul’s offense, and eventually let the Saints retake the lead. The Jays lost the quarter 16-14, and with it the game, 47-40.

Following the game, head coach Zac McVey commented on how nerves played a significant factor in the loss.

“To say our girls were nervous for the first game of the season would be an understatement,” McVey said. “It led to indecision and hesitation in the first half, and St. Paul was able to capitalize on our mistakes. To their credit, the girls came out in the second half, settled down and battled back to tie the game late in the fourth quarter.”

Despite losing, Cattoor played a strong opening game for the Blue Jays, posting a double-double with 12 points and 12 rebounds. She scored her 12 points diversely, shooting 4-9 from the field and knocking down 4-7 free throws. She also managed to grab six of her rebounds off the offensive glass. Cattoor shined as well as a distributor and defender, dishing out three assists and grabbing four steals.

Cattoor, after the game, said that the team’s opening to the game was the reason for their loss. “Honestly, we were just slow in the first half. Once we settled in, I think we had some great looks.”

Fellow Senior Fuller was another major contributor to the Blue Jays offense on Saturday. Fuller did a great job extending the floor for Jefferson, knocking down 3-7 of her three-point attempts, which were the only threes the Blue Jays hit all game. Fuller also grabbed a rebound, an assist and a steal to go along with her nine points.

Fuller echoed the comments made by her coach, McVey, after the game.

“I think there were a lot of nerves just because it was our first real game of the season,” Fuller said. “It took us a while to find our rhythm in that game, but once we did, it looked great.”

Last year’s leading scorer Laney Smith had an off-day for Jefferson. Smith averaged a team-high 12.8 points per game last season, but on Saturday managed just four points on 2-13 shooting. While Smith had a tough night scoring, she still contributed in a major way on the other end, finishing with five rebounds, three assists, four steals and two blocks.

Jefferson, now 0-1 on the season, will look for its first win of the season Monday when they continue in the Valley Caledonia Tournament’s consolation semi-final round against the Bismarck Indians (0-1). The Indians are searching for their first win after taking a brutal opening loss to South Iron 99-7.