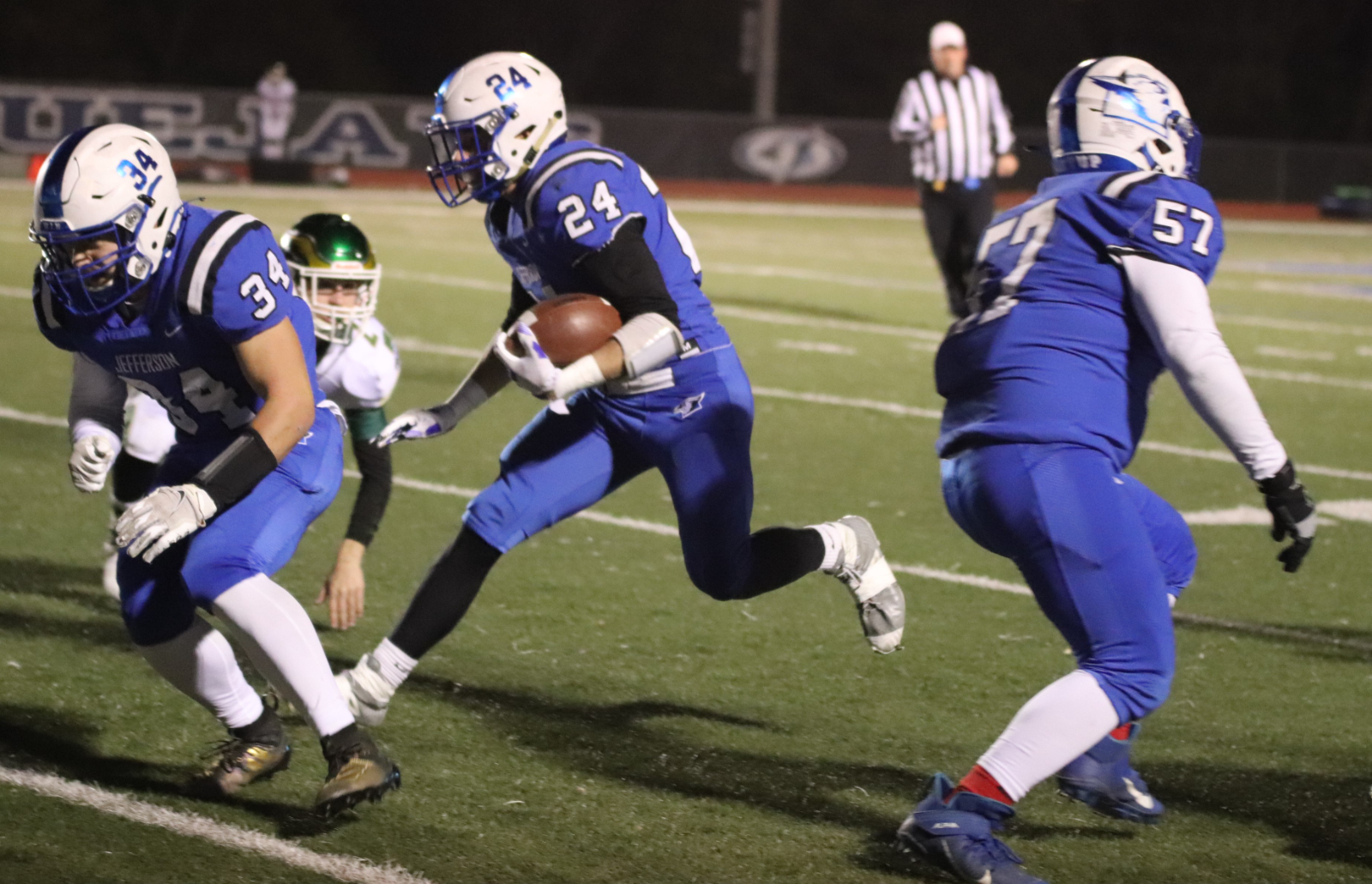 In the History of Jefferson R7 Football, there have been times when the Blue Jays have seen the District Championship on the horizon. In a year where nothing seems impossible, and on Friday the 13th none the less; The Blue Jays dreams soared into reality. They are now perched on top of the district throne after a dominant 42-20 victory over the New Madrid Central Eagles.

It’s been a long time coming. In fact, it’s never happened before in the history of the Jefferson R7 high school football program. For the first time ever, on Friday November 13, the Jefferson Blue Jays Varsity football team won the district championship, defeating the New Madrid County Central Eagles by the score of 42-20.

Knowing that they are the first ever to accomplish such a feat, the athletes and coaching staff couldn’t be more proud. Head Coach Alex Rouggly commented, “It was a historic night for our football program, school district, and community. We couldn’t have done any of this without the continued support of our parents and student body. The atmosphere was electric.”

Providing most of that electricity was Jefferson Running Back Colby Ott, who scored five touchdowns in the game. He was an offense machine picking up 163 yards rushing, and another 65 receiving. Ott, humbled to be a part of the achievement, said, “It means so much to everyone on this team and this community.”

Jefferson’s performance was nothing if not highlight-reel football. After holding New Madrid to a punt on their first possession, Jefferson was raring to go. They wasted little time as Quarterback Drew Breeze threw a 55-yard bullet to Ott who took it in for the first six points of the game. Will Breeze added the extra-point to jump out to a 7-0 lead. Rouggly knew his team was prepared, and said, “As a coach, you can tell when your kids are ready to play, and our young men were. We came out and set the tone early with a defensive stop, and then a touchdown drive afterwards.”

New Madrid countered with a rushing touchdown at 3:21 of the first quarter, but missed on the two-point conversion. After 12 minutes of play, Jefferson led 7-6.

Jefferson came right back at 11:15 in the second quarter, handing the ball off to Ott who carried it two yards for another six points. After W. Breeze tacked on the kick, it was 14-6 Blue Jays.

The Jefferson defense continued to shut down the Eagles and get the offense back on the field. At 4:29, it was Ott again from one yard out who pounded it in for his third touchdown of the game. W. Breeze added the extra-point for a 21-6 lead at halftime.

Ott just couldn’t be stopped. At just 10:29 of the third quarter, he scorched the earth with a 43-yard touchdown run, his fourth of the game. W. Breeze again nailed the point after kick, opening the lead even further, making it a 28-6 game.

Jefferson couldn’t wait to get the ball back into the hands of their hot running back. Just three minutes later, at 7:22, Ott continued his scoring streak, this time breaking away for a 36-yard touchdown carry. W. Breeze nailed another through the uprights putting the Blue Jays up 35-6, after five touchdowns from Ott.

Finally, the Eagles responded at 11:51 of the fourth quarter with a touchdown pass. The two-point try failed, and the Blue Jays still held a commanding lead 35-12.

Jefferson, however, wasn’t finished. At 8:02, Dylan Schnitzler put the game out of reach with a 10-yard touchdown run. W. Breeze’s final kick of the night was good, putting his team up 42-12. D. Schnitzler was ecstatic, and responded, “Our teamwork made this happen. Everyone is playing together and executing on both sides of the ball. We are on top of the world right now… first time in school history to win the district championship. It really does feel amazing. It was our goal from the start of the year and we got it done.”

With just four minutes remaining, New Madrid completed a 50-yard touchdown pass, and added the extra two-points successfully, but it was too little, too late, as the Jefferson Blue Jays went on to win the game on a final score of 42-20.

Offensively, the run game dominated. D. Schnitzler had 20 runs for 135 yards and one touchdown. Ott had 16 carries for 163 yards and five touchdowns. Will Schnitzler also ran the ball eight times for 49 yards, and also caught a key interception. “We all believed we could do it from day one and didn’t stop working until we accomplished our goal. Being the first class to ever do it feels great and it’s something me and the boys will never forget,” said W. Schnitzler.

Passing, while it didn’t happen often, was highly successful for Jefferson. D. Breeze completed three of his four passes for 101 yards and one touchdown. Ott had two of those catches for 65 yards and one touchdown, while Colton Richardson also caught one pass for 36 yards. Rouggly was confident his team knew the plan, “Our offense was extremely efficient every time we had the football in our hands. Our kids trusted the concept of ball control, running the football, all while throwing the play action pass when needed.”

Drew Breeze commented on his team’s success, saying, “It feels great to be apart of this whole thing! I can’t ask for a better team or coaching staff. We played our best game on Friday and that is something I will remember forever. It means a lot to this school to make some history and as for the community, it is nothing but love from everyone!”

On the defensive side, Dawson Jakoubek was everywhere securing 11 tackles while assisting on four others. Jakoubek, full of emotion, said, “It means so much to this community especially since this is the first district championship in our football history. This is just something I’ll never forget in my life. I’ll always look back at this moment and be proud of my teammates.”

Rouggly loved the way his team handled the game, and said “Our defense did exactly what we needed to do to win a district championship. That was to keep everything in front of us, fly to the football and tackle exceptionally well.” The second leading tackler, with 10, was none other than Ott. After him was Robbie Hurley with seven, while Richardson and and D. Schnitzler each had five.

Now sporting an 8-2 record, including the current six game winning streak, the team must prepare for what’s yet to come. Rouggly knows it’s not over yet, “We are going to enjoy this one this weekend, and then focus on the Duchesne Pioneers in a State Quarterfinal game set up for next Friday.”

Ott summed up his performance and his team’s historic win by saying, “It’s an amazing experience when you get to be a part of history and that’s what we are. It’s definitely a moment we will never forget.”

The Jefferson Blue Jays are riding high, but now must prepare for the biggest match-up in their school’s history, as they look to advance in the MO State Class 2 football tournament. Their next game is Friday, November 20, at 7:00 P.M. against the Duchesne Pioneers.