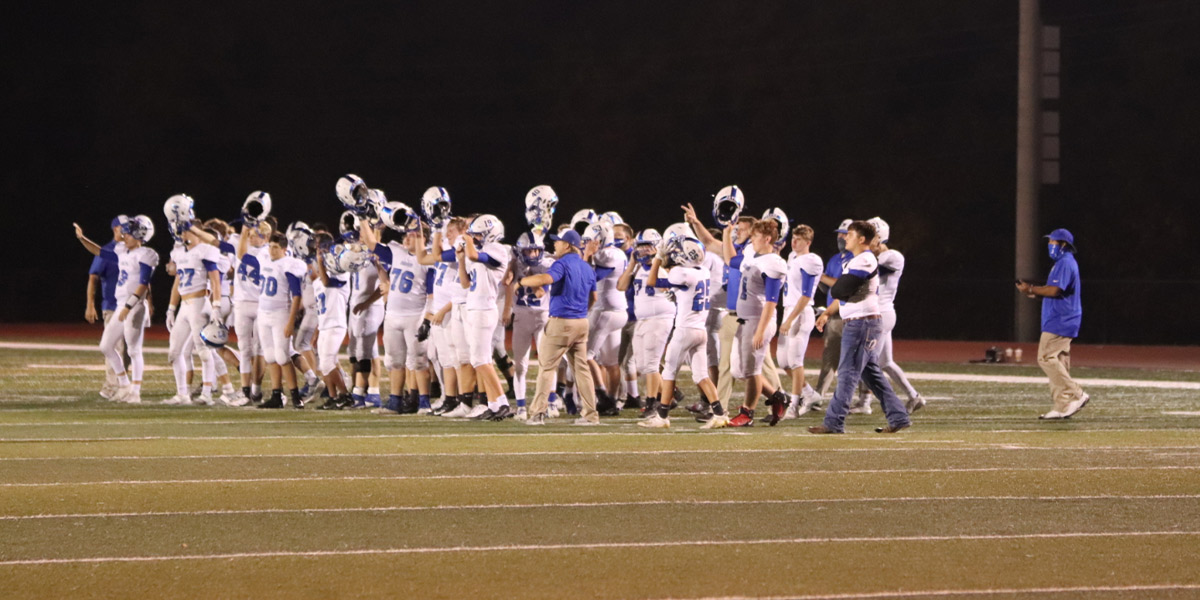 The Jefferson R7 Blue Jays massacred the Chaffee Red Devils by the score of 50-6 on Friday night. The Blue Jays have now scored 92 points and only given up six in their last two games. Head Coach Alex Rouggly said, “We were really pleased with the way our kids came out to play after a long bus trip down to Chaffee. They came out with a sense of purpose and that showed from the opening kickoff.”

A quick score on a 39-yard reception by Colby Ott from Quarterback Drew Breeze at 10:24 of the opening quarter got the game going in the right direction. The extra point from Kicker Will Breeeze made it 7-0. Also in the first, at 4:29 Ott found the endzone again on a 15-yard run. W. Breeze added the extra point to extend the lead to 14-0 after one quarter.

Opening the second quarter, Will Schnitzler had a two-yard touchdown run to keep the scoring going. D. Breeze completed the two-point conversion pass to Colton Richardson to make it 22-0. Just over a minute later, at 10:24, Richardson caught another D. Breeze pass for a 23-yard touchdown. Another successful kick by W. Breeze made it 29-0. According to W. Schnitzler, “Spreading the ball out into all of our athletes’ hands kept the defense guessing all night which led to big games from everyone.”

The Blue Jays weren’t done yet. At 9:03 of the second quarter, Dylan Schnitzler carried the ball five yards across the goal line for a touchdown. W. Breeze again nailed the point after for a 36-0 lead. With 2:32 left in the first half, W. Schnitzler had another touchdown run, this time it was a 12-yard carry. Successful with the kick again was W. Breeze. At half time, Jefferson led 43-0.

The final Jefferson score came in the third quarter at 2:32, off a 16-yard D. Schnitzler run. W. Breeze tacked on the final point making it 50-0. Chaffee did manage a touchdown as time ran out in the game, for a final score of 50-6.

“We were very efficient as a whole. We executed the offense, with only a few hiccups to work on, but other than that it was a great game. Getting out on the edge was great for us, we were able to execute that, and it did great things for us,” spouted D. Breeze.

Defensively, Richardson was excellent with six tackles and one interception. Dawson Jakoubek had a great game with five tackles, one interception and one tackle for a loss. Ethan Boyer was right behind him with five tackles. Ethan Deal added three tackles, one sack and two tackles for a loss. Robbie Hurley also had one tackle and one fumble recovery.

According to Jakoubek, “Great team win on the Defensive side. Our secondary has got to be ready for a pass heavy St. Vincent team. This is a huge game that can decide who we play in districts. Us and St. Vincent are fighting for first seeds in different districts.”

Jefferson now looks ahead to their final home regular season game, a big conference match up against St. Vincent, on Friday 10/23. Rouggly said, “We really excelled in all three facets of the game of football. We still have some things to clean up, but overall our kids are playing good football at the right time of the year. The continuation of that during this week is vital against a very good St. Vincent Indian team, in order to put ourselves in a good position to host a first round district playoff football game.”