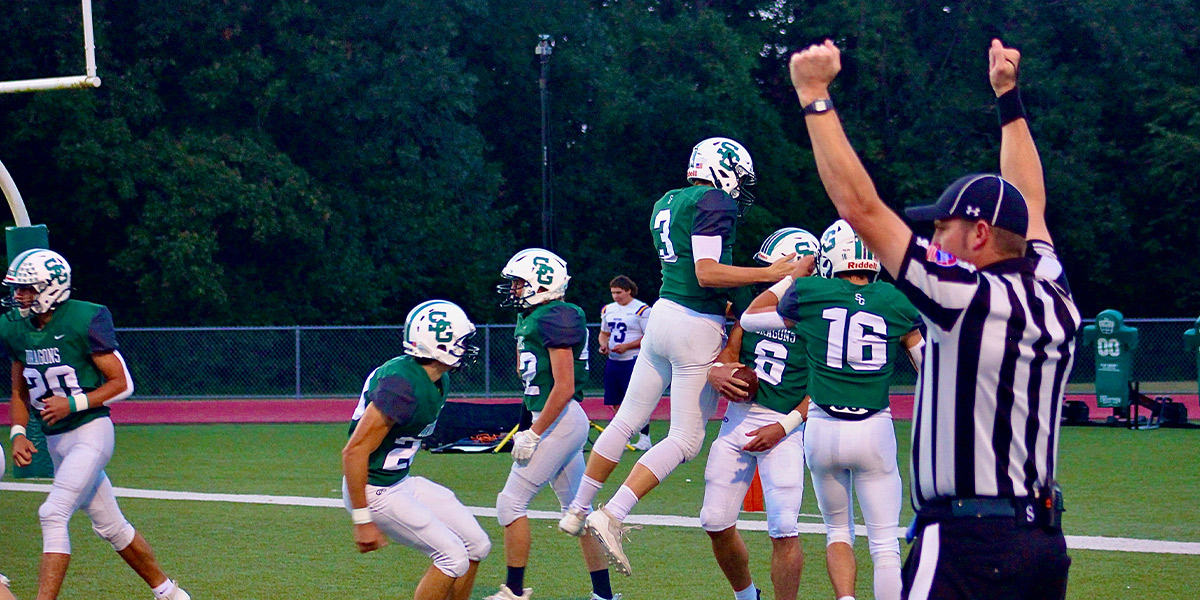 A high scoring affair for the Dragons

The Ste. Genevieve Dragons slammed Perryville on Oct 9, defeating the Pirates 41-0. The Dragons were not intimidated traveling to Perryville, and came out of the gates blazing scoring 14 unanswered points in the first quarter on some massive plays.

In the second quarter, A. Boyer completed a huge 57-yard pass to Payton Matthews for a touchdown. Schwent was again successful on the point after try, making it 21-0.

In the third quarter, A. Boyer landed a 63-yard pass to Kaden Buatte. Again, Schwent nailed it through the uprights for the extra point, giving Ste. Gen a 28-0 lead. Buatte commented, “We are greatly improving as a team week by week. The beginning of the season was rough, but we bounced back and are looking forward to the rest of the season and districts.”

The next Ste. Gen touchdown came in the form of a five-yard A. Boyer run. The extra point try by Schwent was no good, but the blow out score was now 34-0.

Still in the third, Austin McBride ran one to the house for six points, and Schwent added the point after, making it 41-0 after three quarters.

Neither team was able to score in quarter four, and so the final score remained 41-0.

Offensively, Ste. Gen ran 36 plays for 402 yards, with 331 coming from passes. A. Boyer was six for 12 and responsible for all 331 passing yards, as well as four passing touchdowns and one rushing touchdown. Z. Boyer led all receivers with three receptions for 173 yards and two touchdowns. The rushing duties were mainly handled by McBride, who had seven carries for 43 yards including a score.

On the defensive side, Anthony Nash had eight tackles while Jacob Johns had seven. Thomas O’brien, Dale Propst and Buatte each had six.

Ste. Gen now has a 3-4 record. Their upcoming non-conference home match against Desoto on Friday 10/16 will be the Dragons vs. the Dragons.