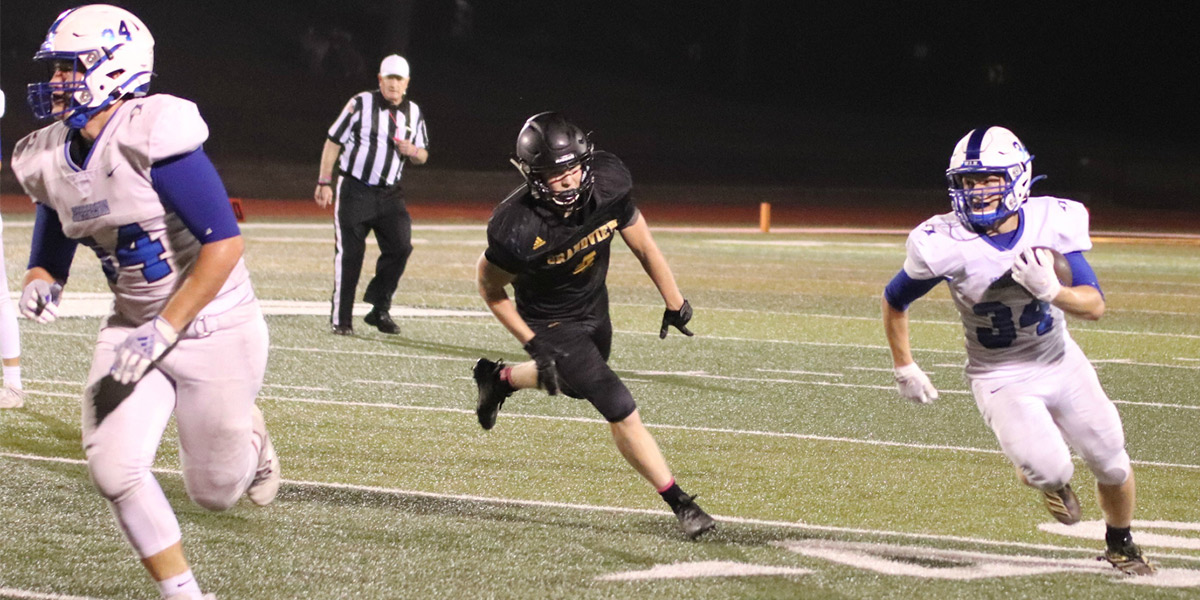 Jefferson moves to a 3-2 record after the big win

The Jefferson Blue Jays soared into Grandview High School and came away victorious against the Grandview Eagles on Friday 10/9. The Blue Jays scored six unanswered touchdowns and won the game 42-0.

Dylan Schnitzler started it off with a 90-yard kick off return for a touchdown just 14 seconds into the game. Kicker Will Breeze nailed the point after try to start things off 7-0 for Jefferson.

Also in the first quarter, Will Schnitzler had an 11-yard carry for a touchdown at 7:59. W. Breeze again was successful with the extra point, giving the Blue Jays a 14-0 lead. W. Schnitzler commented, “Our offense came out with a chip on our shoulder from our performance the previous week. Everyone did their job and it all started from a great week of preparation.”

At 9:41 in the second quarter, Colby Ott ran the ball 20 yards for a touchdown. W. Breeze’s kick was good, making the score 21-0. With just 52 seconds left in the first half, D. Schnitzler carried the ball one yard for a score. W. Breeze was good again for the point after.

At halftime Jefferson led 28-0. Head Coach Alex Rouggly said, “Our kids came out with a sense of urgency. We had a few road bumps along the way with penalties in the first half, but they stayed the course.”

In quarter three, Ott was at it again, this time catching a 16-yard touchdown pass from Drew Breeze. W. Breeze was successful with his kick for a 35-0 Jefferson lead. Coach Rouggly added, “We kept the foot on the gas in the second half with consistency in all three facets of the game of football. I was extremely proud of our entire team’s effort.”

Finally, in the fourth quarter, W. Schnitzler had an eight-yard carry for a touchdown, with W. Breeze providing a sixth successful point after.

Defensively, Dawson Jakoubek had an incredible night, with 13 tackles, eight assists, and one fumble recovery, setting the single game school record for tackles. He confidently quipped, “It’s cool to break your own record and everything, (but) i was more satisfied that we won. We gotta have a great week of preparation for a run heavy Chaffee team.”

In keeping with the potent defensive accolades, Robbie Hurley had eight tackles, six assists, and one fumble recovery. Steve Stephens had six tackles, three for a loss, and two assists.

Rouggly added, “We have a big week ahead in preparation for a very physical team. The sense of urgency that we had during our game on Friday has to take place during the entire week of preparation.”

The Blue Jays look to keep the win streak alive as they travel to Chaffee to take on the Red Devils next Friday, 10/16. D. Breeze commented, “We handled adversity very well, and we didn’t hang our heads over anything. We got right back in the huddle and played the next play. We need to build off of that mentality from here on out. It was a great win for us.”