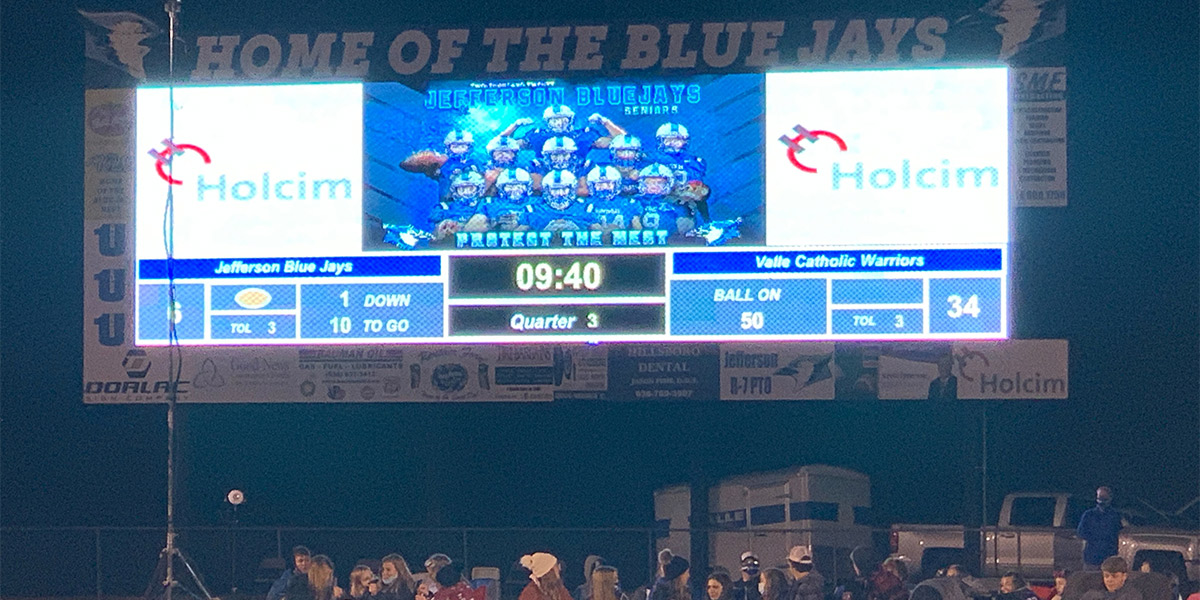 The Blue Jays struggle to shake the rust off in their return to the field as they fall 47-13 to Valle.

After a two-week hiatus the Jefferson R7 Blue Jays returned to action on Friday, but faced a tough task in undefeated conference rival Valle Catholic. The Jays (2-2) couldn’t muster enough offense against the powerhouse that is the Valle Warriors (6-0) and fell 47-13.

The game started off on a sour note as the first quarter was all Valle. They passed for a touchdown and then rushed for another pair all before the 5:00 mark. Turnovers in their own end plagued Jefferson and before the Jays knew what hit them it was 21-0.

Things didn’t get much better in the second quarter as a 60-yard TD strike from Valle increased their lead to 28-0 before the Blue Jays started showing signs of life. Star quarterback Drew Breeze punched in a 3-yard TD run to cut the lead to 28-6, but the two-point conversion failed.

Sadly after that it was another string of scores for Valle. The vaunted offense came through again with three more unanswered touchdowns; one each in the 2nd, 3rd and 4th quarters. By this point the Warriors were up 47-6 and had a more than comfortable lead.

The Jays didn’t have any quit in them though as the defense tightened up over the final 20 minutes of the game and the offense managed another score by way of a Colby Ott connection with Breeze for a 13-yard strike. After the extra point the score sat at 47-13, where it would remain as time expired.

Despite the lopsided numbers on the big board Jefferson played with heart and was likely suffering from a little rust having not played since 9/11, when they stomped Herculaneum 54-0. Senior Dylan Schnitzler agreed saying, “We turned the ball over way too many times last night so that needs to change. It’s hard being off for two weeks. I thought for being out for that long we had some good offensive possessions last night. We just couldn’t execute.”

Coach Alex Rouggly was on the same page saying, “The score isn’t indicative of the effort that all of our kids played with all night.  We got behind early, due to some turnovers, giving Valle a short field, inside our own 20 three different times in the 1st quarter.  It’s tough to rebound against the Class 3 #1 team in the state when you have miscues like that.  We never backed down even during adverse times.  That’s what I love about this group.  They fight when things get tough.  This is a wonderful trait that will carry them for the rest of their lives.  We will get better from this loss. There is no doubt about it.  How we respond is what we can control.”

To champion coach Rouggly’s perspective, let’s focus on some positives. Breeze was once again at the center of the offense, rushing 10 times for 38 yards and a score.   He was also 7-16 for 101 yards with a TD and an INT through the air.  He had this to say, “It is really tough coming back from a two-week break and playing a team like that. Our receivers and our back field played their butts off. We didn’t give up on plays and we fought the whole way through. There is a lot we need to fix and critique going into next week, and I know we will fix those problems and bounce back even stronger.”

Ott came up big as well (on both sides of the ball) with three grabs for 34 yards and a touchdown to go along with two tackles, two assists and the team’s lone interception. Dawson Jakoubek also stood out, leading the team in tackles and assists with seven and four, respectively.  He bluntly quipped, “We gotta be able to make the big plays whenever we need them. Gotta have a great week of preparation for (next week)”.

The Blue Jays hope to get back on track next Friday, but they will have their work cut out for them as they take on a tough 4-1 Grandview team.