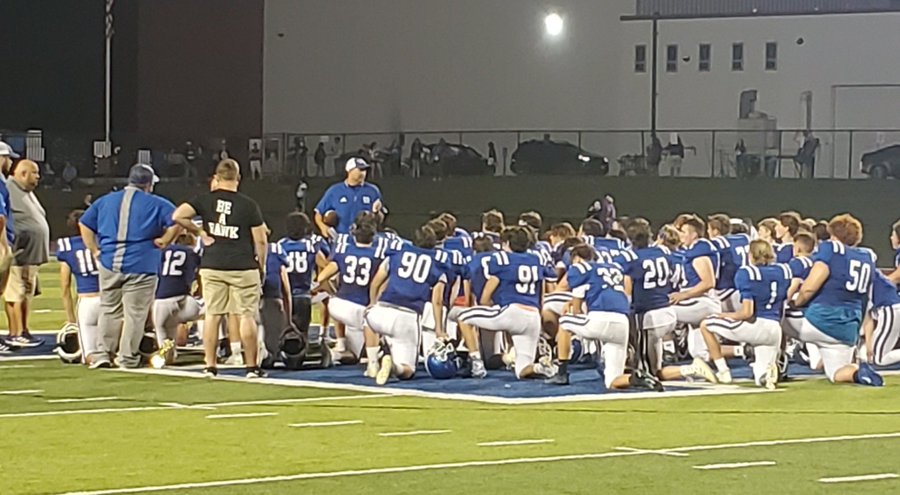 The Hillsboro Hawks broke into the win column on Friday night with a 47-20 win over the Cape Central Tigers.

The Hillsboro Hawks broke into the win column on Friday night with a 47-20 win over the Cape Central Tigers. After dropping their first two of the season it was nice to see a convincing win to pull them within a game of .500.

The Hawks were led by the rushing duo of Jaxin Patterson and Austin Romaine, totaling an astounding 412 yards on the ground. Patterson led the way with 219 on 23 attempts totaling a pair of TDs and a two-point conversion for the cherry on top of his epic night.

Romaine was right on his heels with 193 yards and a TD of his own while leading the team with his 12.1 YPC average. He wasn’t done there. Dominating on both sides of the ball, the dual threat also led the team in tackles with five (four solo, two assists and two for a loss).

“I thought it was great win. I felt like we came out firing. We put up those first few scores and just never looked back. What stood out to me was how our defense played through out the night. Coverage was great and the pass rush was good too.”

Hillsboro outgained Cape Central 561 to 223 in total yards and a big part of that was quarterback Griffin Ray. He only attempted six passes, but connected on three of them for 82 yards and two touchdowns. He linked up with Tyson White and Tyler Watson for 57 and 16-yard scores respectively, and managed to scamper in for a TD of his own on a well-executed rush play.

Ray couldn’t have been happier with the effort, saying “I thought we played a great game. I was very proud of the guys for coming out with some fire and thought the coaches did a great job preparing us for this game. Now we gotta get ready for next week and keep moving forward.  This was the first step to a successful season.”

Twenty-one points in the first quarter, followed up by 14 in the second had the Hawks leading 35-13 at the half and they never looked back. They tacked on 12 more in the 4th for good measure and cemented their first win of the season.

Things will get tougher next week though as they take on the surging Festus club that sits atop the conference at 3-0.