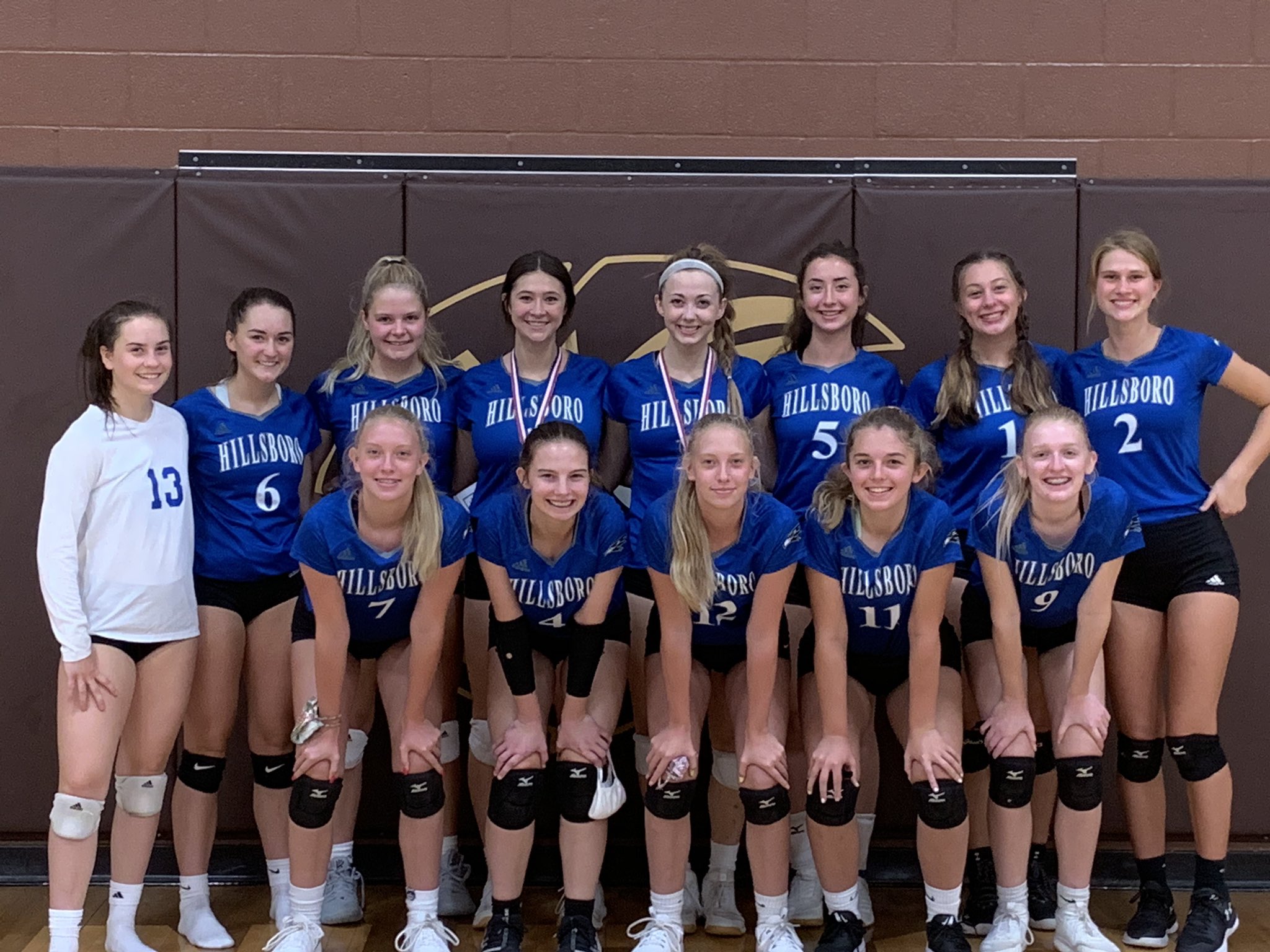 The Hillsboro volleyball Hawks have played well in the early season, going 3-2. Their nemesis has been the Northwest Lions, a talented squad that has beaten HHS twice.

The Hillsboro varsity volleyball squad has seen enough of the Northwest Lions.  The two teams have met twice in the Hawks’ first five matches, and Hillsboro has dropped both.  But it’s playing good competition, like the Lions early in the season, that will make the Hawks a very formidable foe later.

Northwest is 4-0 this season, and is coming off a 27-8-1 year last season.  Hillsboro dropped a 25-23, 25-16 match last Saturday at the Windsor round-robin, and then lost a tough three-set match, 25-18, 19-25, 25-18, last night at Northwest.  Nevertheless, this year’s 3-2 start is far better than last year’s slow beginning.  And according to just about everyone, it’s great to just be playing.  “It was good to be able to go out and play again,” senior Mackenzie Baker said.  “This is something a lot of us have been looking forward to for a long time.” 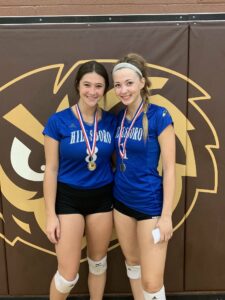 The season started Saturday at Windsor with the Hawks taking two of three matches.  Despite the loss to Northwest, where Evie Roland notched three kills and eight assists, HHS defeated DeSoto (23-25, 25-15, 25-12) and Windsor (25-23, 25-16).  Against the Dragons, Sophia Marchetti knocked down nine kills, while Baker added seven kills and three blocks.  Roland collected 15 assists, while Bella Lewis had nine.  In the win over the Owls, Maya Wright was powerful at the net, knocking down six kills, two solo blocks, and three block assists.  Lewis had a nice match with nine assists and five kills.

Head coach Erin Boss said it all starts with defense.  “Our defense is playing well,” she said.  “However, we tend to go through spurts during the set where they get comfortable and stop playing.  Then they decide to turn it on again.  I’m hoping we can find a way to stay the course for 25 points and move on to the next set.”

Monday, the Hawks got a big win on the road at North County.  The final score was 25-20, 25-17.  Despite the win, Wright said the Hawks have room to improve.  “Tonight we didn’t play to our full potential, but it is always good to win,” she noted.  “I’d say we had really good net defense tonight, and our coverage was spot on too.”

Coach Boss noted a new addition to the team has already reaped benefits.  “Losing our libero last year, I wasn’t sure what we were going to do,” she said.  “But Bella Uzzle, a new transfer this year, came to us and was a pleasant surprise.”

Baker has played exceptionally well in the early going.  Against the Lady Raiders, she collected eight kills with a block assist.  In yesterday’s loss at Northwest, she had eight kills, four aces, 24 service receptions with only two errors, and 14 digs with only one error.  She pointed out that the Hawks are much ahead of last year’s pace.  “Yes much better,” she exclaimed.  “We had some obstacles to get through tonight, especially with how big and experienced Northwest is, but we came out and played our game.  We definitely did better with playing smart, and our defense did well with picking up hits.  Overall, I’m very happy with our performance tonight, but we just get better from here.”

As always, any coach looks for consistency.  Coach Boss is no different.  “We have great moments, and then we have moments where I question our decision-making abilities.  I know most schools in Jefferson County are on the same page when it comes to being conditioned and what not.  But it is what it is as this point.  I feel like we can use it as an excuse all season, or we can work our tails off and fight our way into each of the matches we have.  As a coach, I always want more from my players, and I am hoping this year is the year they deliver.”

Someone that delivered Monday at Northwest was Marchetti.  She led the team with 13 kills, and added four block assists.  She said she’s not taking anything for granted her senior season.  “It’s been absolutely amazing to get back on the court,” she commented.  “We still have things to work on, but things are starting to come together.  But most of all, I’m just happy to be back out on the court with the girls.”

Both Lewis and Roland, seniors as well, echo Marchetti’s sentiments.  “It’s great to be back on the court,” Lewis said.  “Hopefully we get to keep playing and finish the season.”  Roland said, “I am so thankful we are getting to compete this year.  I’m most happy with our teamwork, and the way we fight back when we are down.”

The Hawks have made it clear that they’ll never back down.  The team will return to action next Tuesday with the first home match of the season against the Farmington Knights.  The varsity match should start around 7 p.m.