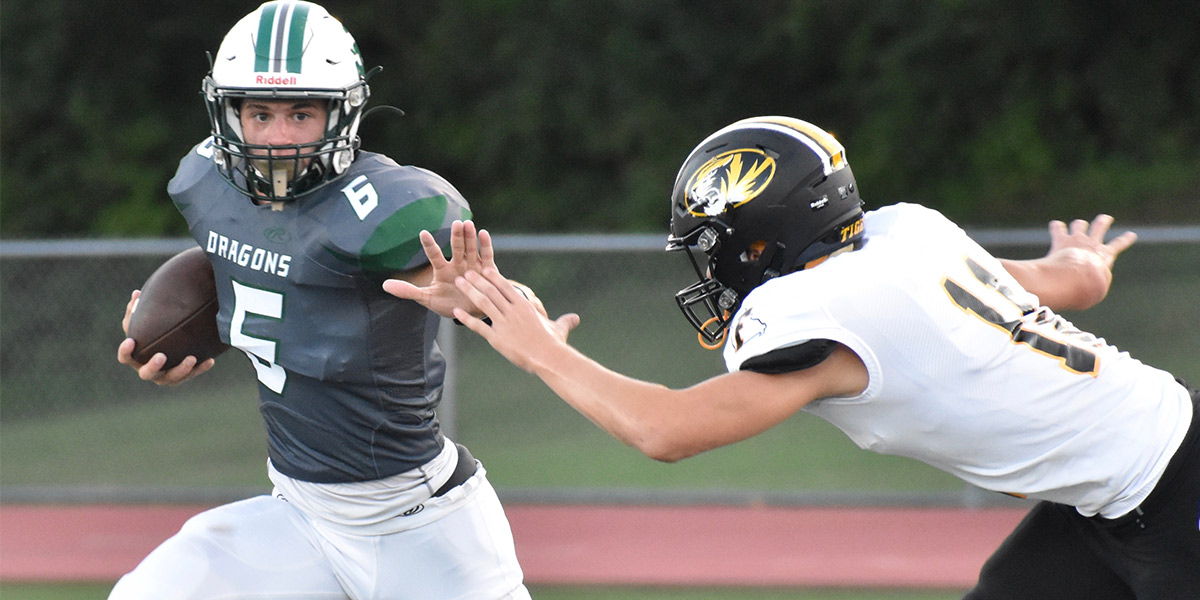 Seven turnovers doomed the Ste. Gen Dragons in Friday’s season opening football game. Festus scored 27 points in the second quarter, and 41 unanswered points total to send the Dragons to their first defeat of 2020.

You hear it all the time…with a young squad, you have to expect mistakes along the way.  That was the theme of Friday’s season opener for the Ste. Genevieve football team.  Seven turnovers, many leading to Festus points, allowed the visiting Tigers to score 41 unanswered points and take a 41-13 victory over the Dragons to open the 2020 campaign. 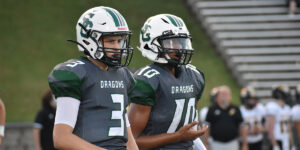 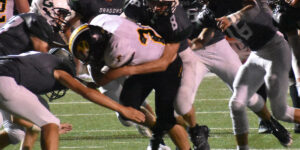 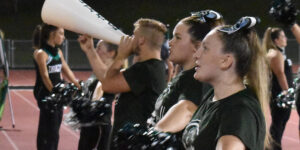 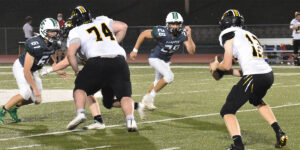 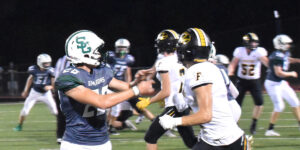 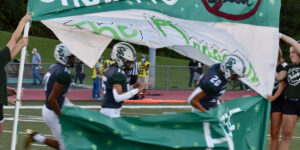 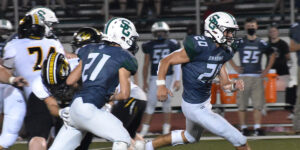 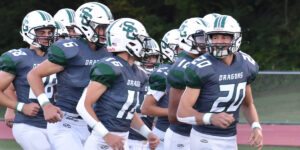 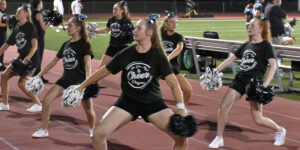 But it wasn’t all gloom and doom for the young Dragons.  Sophomore quarterback Aiden Boyer threw a touchdown pass to Payton Matthews, and the Dragons out-gained the Tigers 154-88 on the ground, led by junior Austin McBride‘s 65 yards.  But a team can’t hide seven turnovers, and the second quarter downfall points to several of those miscues.

The game started well for Ste. Gen as they sustained a time consuming drive, aided by a few Tigers penalties.  Finally, with 7:01 to go in the first quarter, junior Zach Boyer sped in from eight yards.  The extra point made it 7-0, and the Dragons had some momentum.  The defense also did its part early, making some big stops and stifling the Tigers’ running game.  But a seven yard pass play with 2:32 to go in the opening frame allowed Festus to tie it at seven-all.

That was the score after one quarter of play, but the second quarter put an end to the Dragons’ dream of an opening night victory.  Within a span of 5:49, Festus reeled off 27 points to put the game out of reach.  Several turnovers, including a pick six, gave Festus all the points they would need.  The Dragons would hand the ball over five times on interceptions, and two times on fumbles.

“We can’t take them back,” coach Ryan Weik said after the game.  “The game’s over.  We’re going to have a find a way to complete those passes, because we can’t just run the ball.”  Boyer, who had to rush his passes several times because of pressure, completed eight of 25 passes for 98 yards.  “We had a lot of first game jitters,” Weik admitted.  “I think we only have two returning starters on offense.  But we had some guys open…it’s just going to take practice and repetition…we’ll be okay.”

The second half saw both teams get on the board once.  Festus scored its final touchdown three minutes into the third quarter, while Boyer and Matthews connected with 3:40 left in the third.

McBride led the team in rushing with 65 yards on 13 carries, while Zach Boyer netted 55 yards on just five runs.  Weik noted there were holes created, especially in the second half.  “Our offensive line got better,” he said.  “We were able to run between the tackles effectively, which we’re going to have to do to be successful.”  Zach Boyer noted the need for patience.  “It is going to take a lot,” he admitted.  “Our team is very young with very good potential.  We just have to put in the work as a team and push ourselves to get better each and every day.”  Boyer also caught two passes for 30 yards. 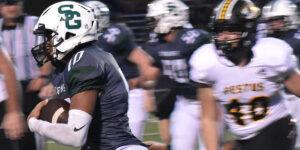 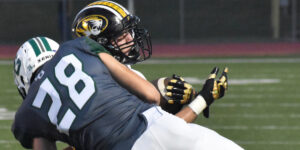 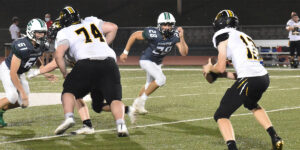 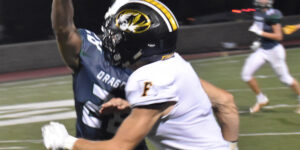 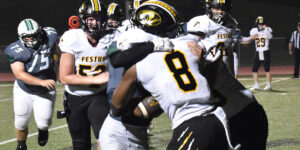 Sophomore Kaden Flye had a 14 yard run, as well as a 17 yard pass reception.  He said the Dragons showed some potential on offense.  “The offense was clicking in the first quarter, but we’re a small team, and we didn’t prepare well enough for the game.  I liked how our receivers got open downfield, and the running game was pretty decent all game.”  McBride led all receivers with 32 yards on two catches.

Defensively, senior Bret Bieser had five solo tackles, three of them for losses.  He said there’s no panic in the locker room.  “I still have a lot of confidence in our team and believe we have a bright future this season,” he noted.  “I think we struggled with it being a lot of people’s first varsity game, but we will be back!  Zach Boyer was also in on five tackles, and junior Kaden Buatte added four.  Boyer echoed Bieser’s sentiment.  “The team was definitely disappointed from the loss, but it was the first game, so we’ll put it behind us and move on from it.”

They won’t have to “move” far this Friday, as they’ll take on the Valle Catholic Warriors across town.  It will be another stiff challenge for the young Dragons.  Kickoff is slated for 7:00 p.m. 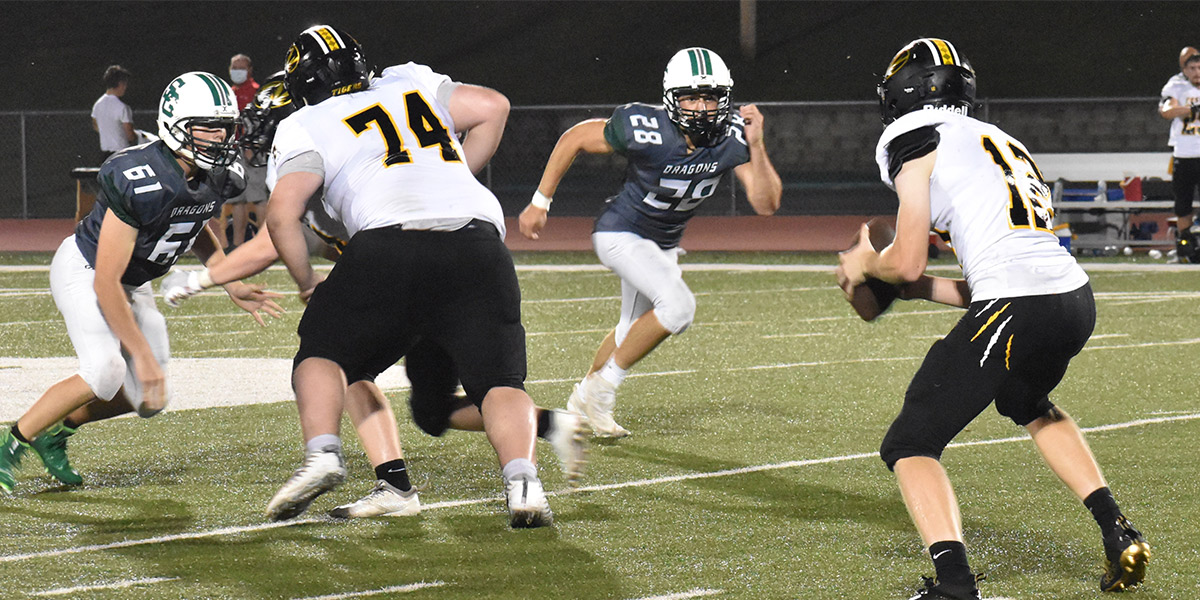