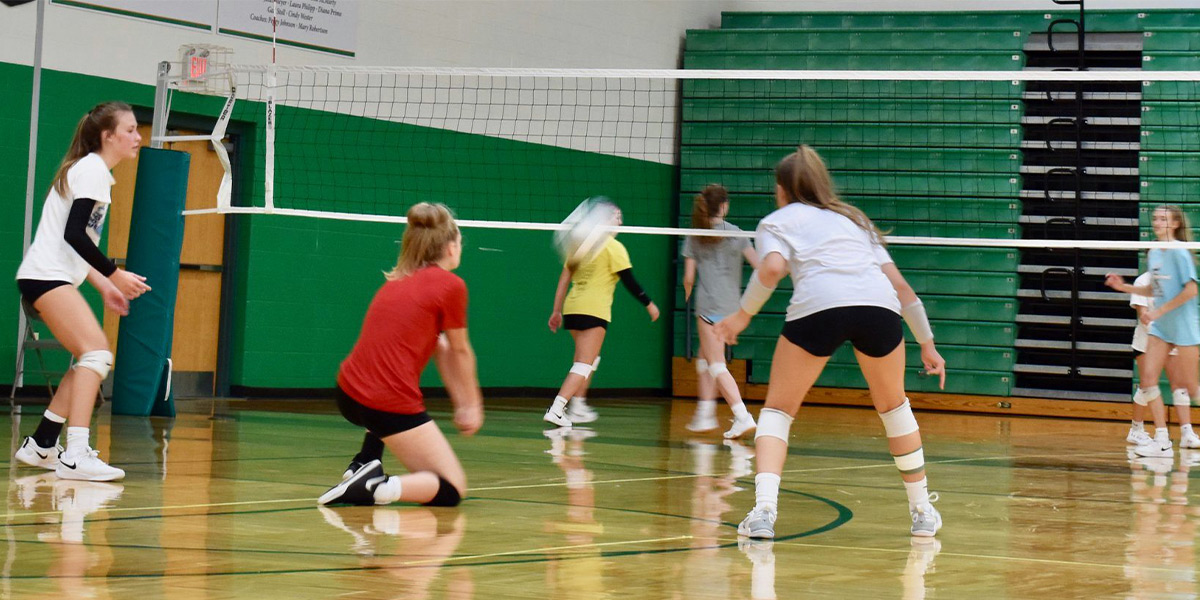 After struggling at times in 2019, the Ste. Genevieve Dragons got hot at the right time and won its fourth straight district title. This year, Carla Basler takes over a team with a ton of experience and the capabilities of going for number five.

Last season’s Ste. Genevieve volleyball record of 14-14-2 doesn’t necessarily scream district champs at first glance.  But a late season surge gave the Dragons their fourth straight title after defeating Festus on the Tigers’ home court.  This year, Carla Basler takes over as head coach.  She has enough weapons to take another shot at conference and district championships.  It’s just about putting it all together at the right time. 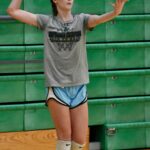 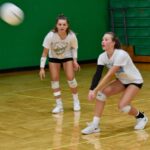 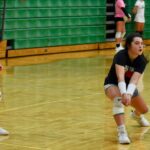 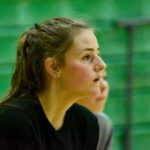 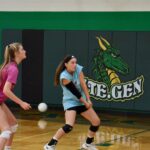 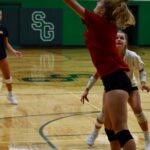 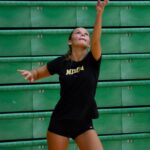 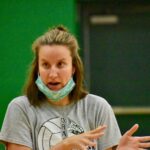 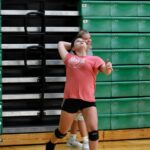 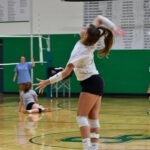 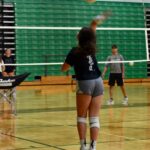 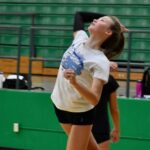 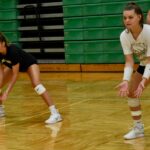 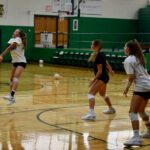 “We have to get everyone on the team on the same page making sure that we are doing all the little things right,” Basler said about what it would take to repeat as district champs again.  “Everyone will have to make sure they are doing their job out on the floor in order to make another district title possible.  I believe in taking everything one game at a time…our focus has to be on what is right in front of us, and not on the next game, or on an opponent that we are weeks away from competing against.  I am also trying to teach the girls that the only thing they need to worry about in a game is getting the next point, and that we work one point at a time.”

And it’s going to take some time.  It will be strange not to see Jaida Greminger, Julia McKlin, Ella Reed, and Megan Schweigert in the rotation, as they were major players in last year’s drive.  But six letter-winners return, and there is leadership galore on this squad.

“I expect all seniors to play a major role this season, just as leaders on and off the floor, showing the younger athletes how to work hard to achieve a goal,” Coach Basler explained.”  Basler then mentioned those athletes that will make up the core of this year’s squad.  “Marysa Flieg should be a key piece to our offense and also lead the younger athletes to be successful hitters/blockers.  She’s stayed after to work with them on blocking footwork, and she truly is a great leader for us.  Brittney Kreitler is another offensive leader.  She is key to getting the ball to the hitters.  Her ability to know who to set and when is one of her many assets to this team.  Her leadership to the younger kids is also remarkable.  Maci Reynolds will have the biggest shift of roles this season.  Last season she had to play many different positions due to Brittney being injured, and the team needing a setter.  Maci’s willingness to step into this role shows her great ability to lead, and her willingness to do what is best for the team.  For these reasons, along with her natural competitiveness, heart, and hustle, it makes her the perfect libero to lead this team defensively.  Jaden Wehner‘s leadership and work ethic are strong, and something that we wish to instill in all athletes.  Jaden shows the other girls the importance of a positive attitude, and how to come together as a team.”

But while those seniors have major roles on this team, juniors Elizabeth Basler and Abby Moore also had a hand in the team’s success in 2019.  With a year’s experience and maturity, the head coach has high expectations for them as well.  “Abby is a returner from last year who played outside; however, she possesses the many great qualities that are needed to be a middle for us this year,” the coach stated.  “She is quick, smart, and a strong hitter with strong blocking hands.  She could also make a great right side for us, or continue to play on the outside again this year.  Elizabeth and Jaden (Wehner) are primarily front row players, both helping us out on the right-side during summer camps.”

Coach Basler noted that the one position that still has some question marks is the middle spot.  “We have several players who have the potential to play this spot.  Along with Moore, A.J. Prudent and Hailey Austin are juniors who played middle last year at the junior varsity level, but they would also make strong right-sides this year.”  And there is an exuberance brought in by some younger athletes that Basler really likes.  “We have a group of five sophomores who are also vying for a spot on the team,” she said.  “Devyn Basler is a setter who will run opposite of Brittney this year.  Brittney’s leadership with Devyn has been outstanding…they both push each to work hard…both are equally smart when it comes to deciding who to set the ball to.  Dru Koetting, Arie Taylor, and Tessa Grass are all front row hitters who can play either left or right side.  Their versatility will only make this team stronger.  Maya Watts is a defensive specialist, and with Reynolds as libero, we should have a strong back row that hustles and is scrappy.  We have a lot of talent on this team, with many players who can play multiple spots.  They show up and work hard each day.  They not only push themselves, but also their teammates, and that is what it is going to take to get better.  We have many options for each position, and are still building a line-up that will be best for the 2020 season.”

Coach Basler knows that her first season at the helm of the Dragons is setting up pretty nicely.  “I am blessed to be able to coach a group of young ladies who truly get along well as a team, who have a lot of heart for the game, and who want to work hard and put the time in that it will take to get better each day,” she noted.  “We have a lot of individual talent, and a very versatile group where we have several players who can play multiple positions.  This versatility is one of our greatest strengths.  Our senior leadership is another great positive strength for us.  The seniors’ willingness to work hard sets the expectations for the younger athletes.” 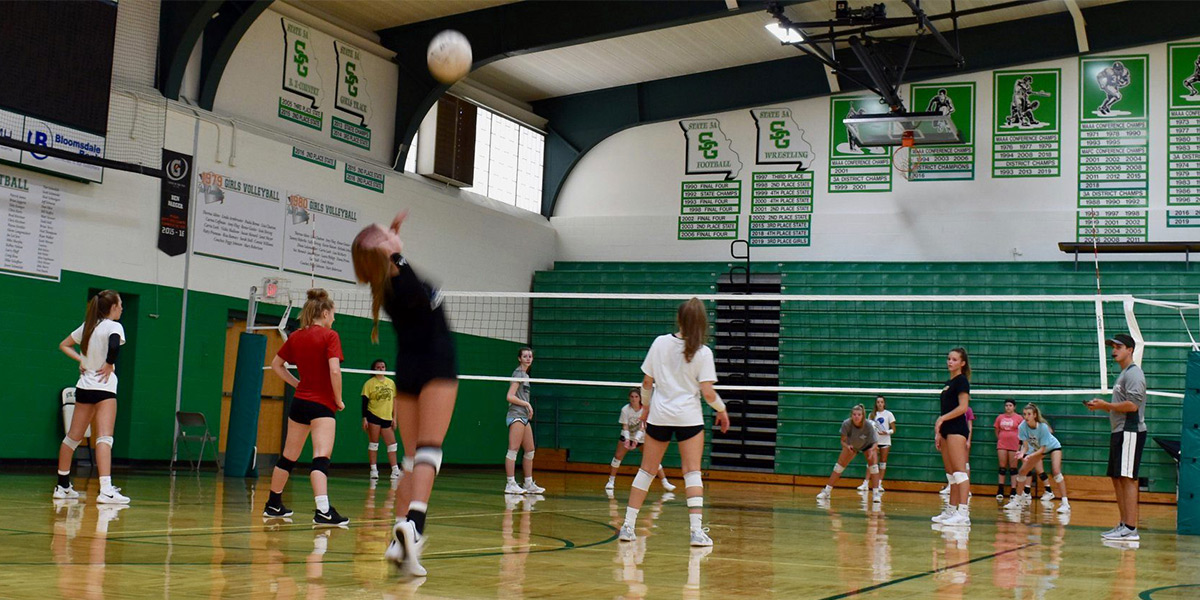 Basler expects her team not to rest on their laurels as she begins to build her own culture with the Dragons.  “My philosophy is to work hard each time we come to the gym or weight room,” she stated.  “You have to practice the way you want to play, so we try very hard to get the girls to have lots of energy, and to communicate about everything that is happening out on the floor.  I have a pretty sound coaching staff (Coach Tyson Roth and Coach Mariah Ritter) who truly understand that practice has to match what we want to see in a game.  Both coaches bring not only knowledge of the game to practice, but also a contagious positive energy that shows the girls exactly what practice should sound like.  I hope to be the team who is known for their hustle and scrappiness…to never let the ball hit the floor without sacrificing our bodies to try to make a play out of something that seems impossible.  We want to make that impossible play happen.  Those moments just help build the momentum that is needed to beat out our opponents.”

And regardless of what the early season holds for this team, there’s no doubt these girls know the part of the season that matters most.  “Ideally,” Coach Basler summarized, “all of our hard work as a team will pay off when post-season play begins.  We want to put ourselves in the position to know that, whenever we play our last game, that we put it all out on the line.  We don’t want to end our season not thinking we’ve played our best ball, or that there was something more we could have done to receive a better outcome.”

The quest begins on September 1 at home against a familiar foe, the Festus Tigers.  The entire schedule can be found at this link:  Ste. Gen Volleyball Schedule 2020