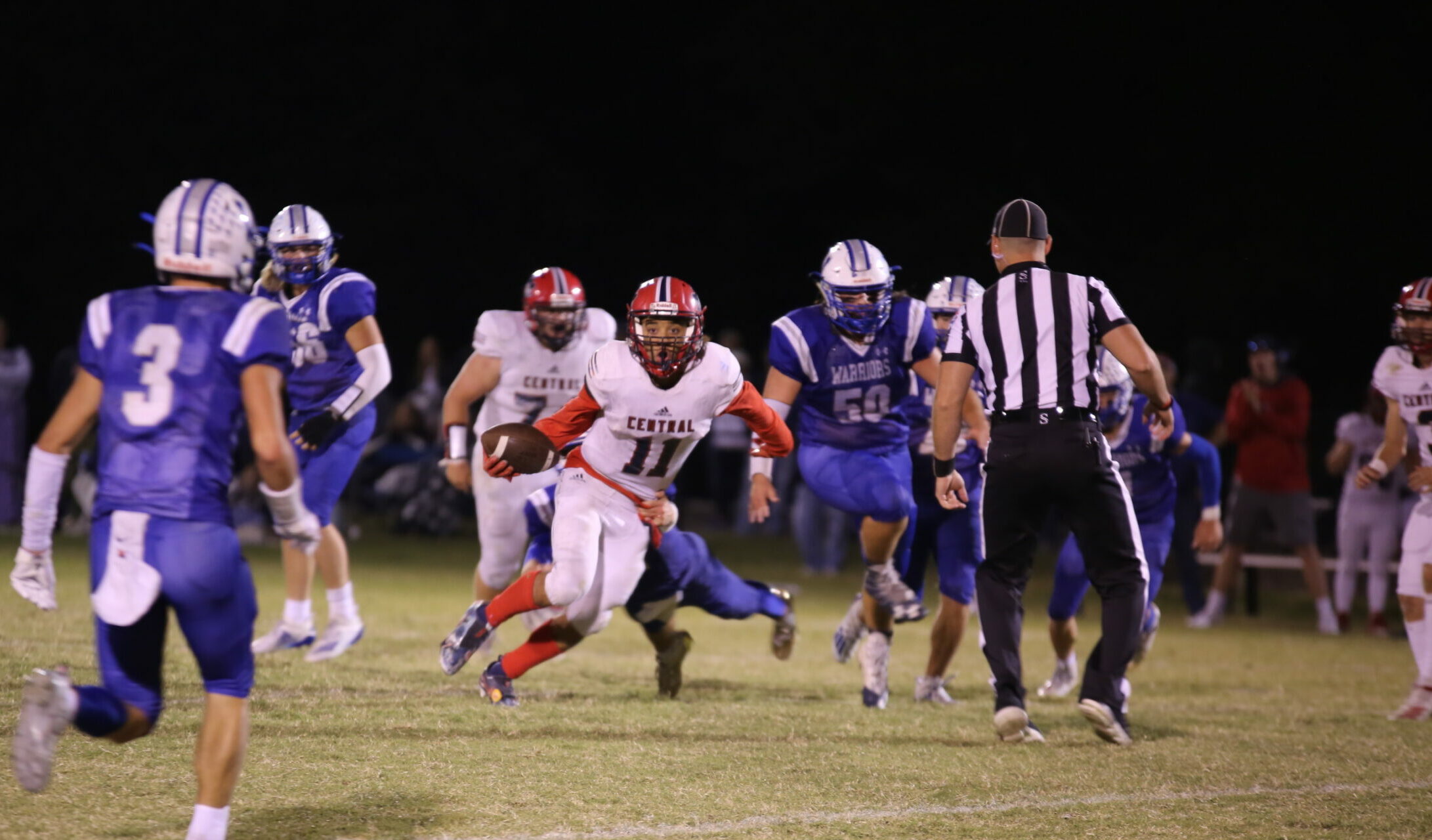 The Central Rebels’ five-game winning streak is snapped by the Valle Catholic Warriors in a hard-fought battle.

All good things must come to an end, and the incredible 5-0 run by Central Park Hills Varsity Football team has concluded. It was a battle of two undefeated behemoths, but after a tough fight, Valle Catholic managed to get the victory, 40-30, after a relentless fourth-quarter comeback, ending the Rebels’ undefeated streak.

Last Friday, September 29th, Central took the trip into foreign territory as they went to Valle Catholic to take on their toughest opponent of the season. Having not been challenged much in the first five games, the also undefeated Warriors were likely to pose the biggest threat to their perfect season.

It was a defensive battle in the first half. Valle capped the opening drive of the game to go up 7-0 at the 9:36 mark of the first quarter. Central, however, forced three turnovers in the first half via two interceptions and a fumble. Unfortunately, they were only able to convert one of those into points.

Central got stopped inside the 20 on two of their first three possessions. The first one came on their opening drive after Casen Murphy made an unbelievable scramble to convert a long fourth down. However, on the ensuing first down play, he was hit and fumbled it back to Valle.

Central uncharacteristically missed an open receiver for a touchdown on the other stop. It was just a tad late getting to him so the Valle defender was able to react and get his hand in there to dislodge it. It was a pass that Murphy and Kannon Harlow both would say they should have executed.

Central’s defense really showed up in that first half though, with interceptions by Murphy and Jobe Bryant, a fumble recovery by Ty Schweiss and two sacks by Triston Stewart and Sammy Callaway, respectively. That defense gave Central the opportunity to tie the game at 7-7 when Murphy scored on a quarterback draw from the six-yard line at the 5:54 mark of the second quarter.

In the second half, Central opened up with the ball and went on an 80-yard drive. They were able to run the ball better and took nearly four minutes off the clock. Murphy hit Harlow on a 15-yard fade in the back left corner. After Valle jumped offside on the extra point, Central decided to go for the two-point conversion. That decision paid off as Bryant took it to the house out of the power formation to make it 15-7, with 8:43 remaining in the third.

Valle answered in under two minutes on a fourth and eight from 18 yards out. They went for the tie, and this time, they converted for the two points to tie the game 15-15, with 6:49 left in third. Central took even less time to answer that as Harlow took the first play 74 yards on an inside handoff from the wide receiver position. Mason Williams again added the extra point to go up 22-15, at 6:31.

After Central got a stop and got the ball back, they had an opportunity to really swing the momentum. The Rebels were faced with a fourth and one after Bryant slipped on a wide-open route to get the first, but decided to try converting even though they were in Valle territory. Valle held strong though and regained the momentum, and it didn’t take them long to make Central pay. The Warriors ran it in from the two-yard line at the 1:26 mark of the third. That made it 22-21 as Nathan Weinhold was able to block the extra point.

This was a heavyweight fight because it always seemed like each team would answer the bell. It was Central’s turn to answer, and they did just that. They put together another 80-yard drive. Bryant did most of it on the ground. A long 36-yard run got them in striking distance and he also finished the drive with a one-yard run. That score made it 28-21 and the Rebels decided to go for two to make it a two-score game. Murphy hit his cousin Jaxon Jones on a short pass in the flat and it made it 30-21 with 9:09 to go in the game.

Valle responded quickly when a receiver got loose down the right sideline and was knocked out at the one-yard line but was awarded the touchdown. After missing the conversion, it left the score at 30-27 at the 8:00-minute mark.

Central needed one more good offensive drive but it wasn’t to be. They went three and out at a very bad time and had to punt it back to Valle, who were able to take over at midfield, and at the 4:25 mark, the Warriors were able to score from the 10-yard line. The extra point made it 34-30 Valle.

Central needed one more answer. After the kick went out of bounds, Central should have been starting from the 35-yard line, but instead, the officials spotted it at the 20. An explanation was given to Central Head Coach Kory Schweiss, but it didn’t satisfy him as a lot of people were wondering how that could happen at that point of the game.

So the Rebels had to go 80 yards in just over four minutes. On the first play, Murphy hit Caden Casey for a 27-yard gain to take it near midfield. After Central got nine yards on the following three plays, they were faced with a fourth and one. Valle was able to stuff the play for no gain. So the turnover on downs pretty much did in the Rebels.

Central did have two timeouts left so they used one after Valle had a no gain on first down. However, on the second down play, Valle scored from 58 yards out to seal the victory, 40-30, with only 1:40 play. And that was all she wrote.

Harlow had 53 receiving yards on five catches and 84 rushing yards on four attempts. He also scored a touchdown rushing and receiving.

Jaxon Jones led the defense with eight tackles. Weinhold and Schweiss each had six tackles a piece.

With an L now on their record, the 5-1 Rebels will have a week to retool and refocus to get back on track. This Friday, October 7th, Central will again be on the road, this time taking a trip to Fredericktown. The 2-4 Blackcats pose much less of a threat and will be a good opponent to hopefully right the ship for the Rebels, who still most certainly have a MO State Championship on their minds.