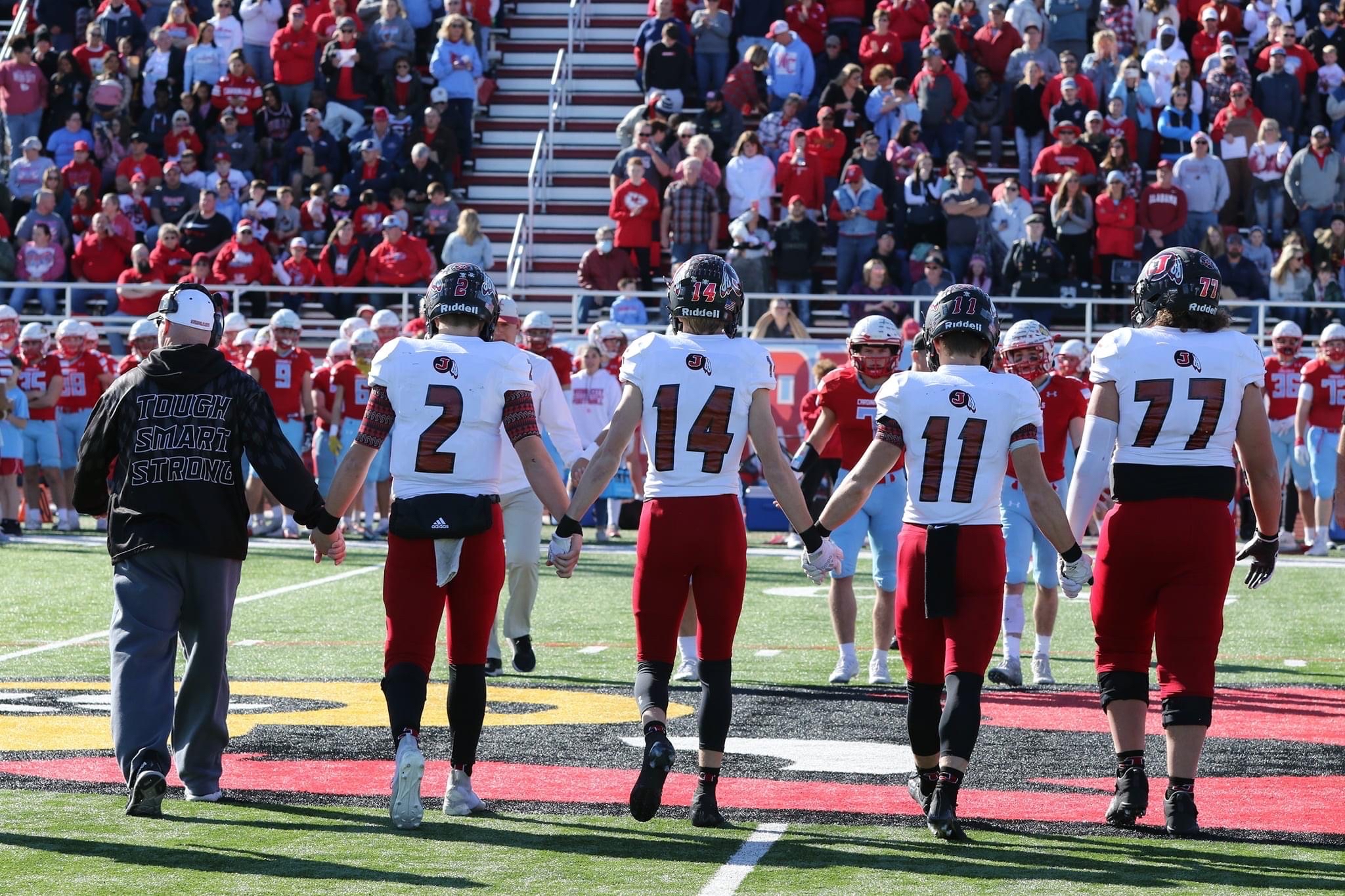 The Jackson Indians Varsity Football team makes waves in 2021 in defense of their State Title, but their season ends with a semifinal loss to Webb City… but it was a heck of a year.

The Jackson Indians Varsity Football team had been on one heck of a run. Four consecutive perfect regular seasons, a 2020 State Championship Title, a 26-game win streak and countless accolades along the way are just some of reasons why this program is so special.

Sadly, that winning streak was stopped on Saturday in the State Championship Semifinal game against Webb City, but the loss doesn’t discount any of the ways the Indians are so impressive. Clearly they were hoping this would have been the penultimate game of their season, sending them to the State Finals, but their run ended in a gritty battle with the Cardinals after a failed but gutsy fourth-quarter comeback.

The story of the final game was one that revolved around Webb City Quarterback Cade Wilson. The fleet of foot signal caller for the Cardinals was responsible for all but one of his team’s touchdowns, all on the ground, and the Indians had no answer. He punched one in from 35 yards out in the first at 7:51, and then another from two yards away about four minutes later to give the Cardinals a 14-0 advantage.

Jackson then moved the ball down the field to the Cardinals three yard line with a drive that closed out the first quarter, leaving the Indians on the opposite side of the field, facing a fourth and three. QB Cameron Marchi answered back by bulldozing his way into the endzone on a quarterback keeper to make it 14-6, but Wilson would strike again five minutes later to put Webb City back up by two scores. They would rush in another shortly after that to go up 28-6 and close out the half.

Head Coach Brent Eckley would rally the troops at halftime, but it took a bit to register as Wilson ran in his third of the game for 35 yards and a 35-6 lead. That was the kick in the pants the Indians needed though, as Marchi connected with Kannen Turley for a six-yard strike and a two-point conversion to Isaiah Davis to make it 35-14.

Then at 8:55 of the fourth quarter, Joshua Wehrenberg punched one in from nine yards out and cut the lead to 35-21, but that was all the offense the Indians could muster for the rest of the game. That score would be the final, and the one that ended Jackson’s historic run.

But this team is so much more than just one game.

From a team perspective, they were flat out dominant all season long. During their 12-1 stretch they outscored opponents on average 46.7 to 10.7, showing a balanced and decimating attack on both sides of the ball. They managed 263 first downs, over 2,500 rushing yards, over 2,700 passing yards, completed 45.5% of their third down attempts and had a record-setting kicker getting it done every week. In short, they could pretty much beat you any way you can dream up.

The 2021 turnover battle spoke for itself, as the Indians picked off 10 interceptions and recovered 13 fumbles, not to mentions countless blocked kicks, TFLs and constant pressure on the opposing teams’ QBs. On their end they committed just nine turnovers (four INTs and five fumbles lost), giving Jackson a +14 ratio for the season.

Individually, there was plenty to talk about as well, starting with the least mentioned but most dominant faction of the team. We’re of course referring to Ashton Flinn, Tanner Raines, Clay Doza, Liam Bryant and Noah Gibson, more commonly know as the offensive line. These five beasts were the catalysts that fueled what was one of the most dominant offensive seasons in recent memory. They created gaping holes for the running game and countless precious seconds for the quarterback to pick apart opposing defenses.

The results of such a dominant O-line shined through in the form of Marchi’s statistical triumph in 2021. The dynamic QB racked up nearly 2,700 yards through the air, over 300 on the ground and 49 total touchdowns (40 via the pass, nine rushing) versus just four interceptions. He averaged above 207 passing yards per game (sitting out many a second half due to relative dominance), racked up a 69.1 completion percentage and a 213.3 QB rating. That pretty much says it all about Jackson’s special talent under center. Now all he needs to do is treat those big boys to a steak dinner.

As for his receivers, Turley and Davis were other-worldly. Turley paced the way in yards and catches with  1,268 and 61, respectively, and hauled in an impressive 16 touchdowns. While Davis had 52 grabs for 914 yards and a team-leading, ridiculous 20 TDs. The triumvirate of the passing attack was paramount for Jackson, and was an inarguable key to their overall success.

The ground game, comprised of Tony Williams and Wehrenberg (known to many as the two-headed monster), was integral as well. Williams led the way with 156 carries for over 1,000 yards and 16 scores, while Wehrenberg came in later in the season to pace the lead back with 567 yards and five TDs of his own.

Defensively, the Indians were a suffocating, scintillating and seemingly unstoppable force all season long. Tony Terry was a stalwart on the back line with 86 total tackles and also had 18 for a loss, a team-leading four sacks, three forced fumbles and four blocked kicks. He was everywhere at once and it showed on the stat sheet.

Ryley Styer was another man possessed on the defensive side, as he not only totaled 80 tackles, but also led the team in TFLs with 19 and nine QB rushes. Add a pair of sacks, two fumble recoveries and three blocked kicks, and his season should go down as one of the best in recent years.

Then there is the kicker/wide receiver combo that is Logan Bruns, who made history of his own this season. He set the record for most points scored by a kicker in a High School career in Missouri State history with 219, is one of just six players in the state to ever eclipse the 200-point mark and was as automatic as they come no matter the circumstance.

Kudos to all the incredible defensive and special teams players on the Indians, and to their triumphant offense and coaching staff as well. It was truly a season to behold, and with a program this remarkable, there is likely more in store for 2022.