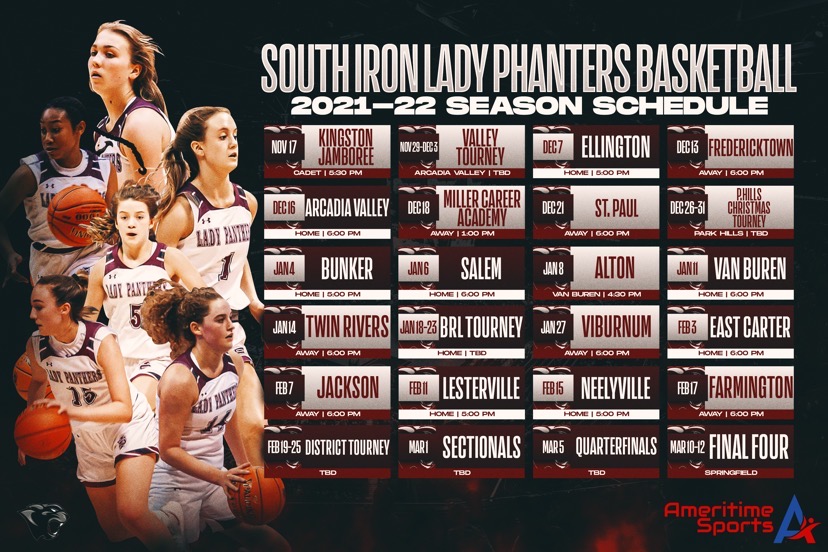 The South Iron Lady Panthers Varsity Basketball team returns every player from last year and is poised to go on a deep run in 2021-22.

Share
Tweet
Share
Share
Email
Comments
The South Iron Lady Panthers are coming off a fabulous season that saw them make it to the State Quarterfinals, but this year they are looking for more. Locked and loaded for another State Championship push, they have all the pieces in place and just need to execute. That shouldn’t be too much of an ask from this tenacious group overflowing with grit, tenacity and moxie.
Last year the Panthers were an impressive 21-6, and this season they miraculously return their entire roster. The fact that they went as far as they did last season with a roster comprised of Sophomores and Juniors is truly telling of their achievement… and the potential for a big run this year.
Notable returning players this season are: Megan Lashley (Sr), Maddie Ayers (Jr), Allecia Cornell (Jr), Drew Gayle (Jr), Enzley Dinkins (Soph) and Anna Parker (Soph.)
Ameritime Sports caught up with Head Coach Lawrence Graves and asked him a few burning questions about this year’s squad. Here are his responses.
Who are your top and key athletes this season?
“All six of our returning rotation players are key to our success and could be included in the starting lineup any given night. Each player brings unique skills and qualities to our squad culminating into something special.
Maddie Ayers is our leading scorer from last year.  She earned All-State, All-District and All-Conference honors last season as a Sophomore. From the point guard spot, she averaged just over 19 ppg. Not only is she a great scorer, she led our team in assists and steals as well. She has a special ability to impact the game in a variety of ways.
Allecia Cornell was our second leading scorer last year (12 ppg).  She too earned All-District and All-Conference honors last season.  Allecia can really shoot the basketball.
Enzley Dinkins was our third player earning All-District and All-Conference honors (as a Freshman).  She averaged 10 ppg on the season and led our team in rebounding with 7 rpg.”
What are your expectations for the team this season?
“Making it to the Final 4 last year with no Seniors was really special. Our goal this year is to go back with our sights set on the Championship game.”
What are the true strengths on this team?
“This team is really special.  We are skilled, quick and work really hard.  But, the best (and probably most important) trait of this team, is their ability to play together. This team has the willingness and ability to strike from any angle.”
What are your thoughts on this year’s schedule?
“We worked really hard with our Athletic Director (Dusty Dinkins) this off-season to improve our schedule and we are really pleased with what we ended up with. In addition to already playing Ellington (Class 2 defending champs), East Carter, Twin Rivers, Neelyville, Farmington and being in the Park Hills Christmas Tournament, we added Houston, Van Buren, Jackson, Miller Career Academy, Alton and Salem. We should not have very many games this year that won’t challenge us as a team and hopefully prepare us for the post-season.”
Are there any other athletes you’d like to mention?
“Anna Parker was our 6th man last season.  She came off of the bench and provided us with some added defensive energy and the ability to knock down shots. She has put in a lot of work in the off-season improving her game, and we really look forward to her taking a big step forward for us this season.
Drew Gayle (5’10) and Megan Lashley (5’8) return as our inside presence. Both do a great job defending and rebounding (despite being undersized most of the time).  What they lack in size, they make up for with grit and physicality, and they both consistently find ways to score as well. Megan averaged 5.4 ppg and 4.1 rpg and Drew 7.2 ppg and 5.1 rpg.”
It sounds like the Lady Panthers should be a force to be reckoned with this season, and have a schedule that will get the most out of them each game. Returning your entire team is an exceptional rarity in High School sports, and while that makes South Iron a fortunate group, it also makes them a very dangerous one. Look for this squad to make waves this season and put together something truly special.
Good luck Panthers!
South Iron Girls Basketball Season Preview