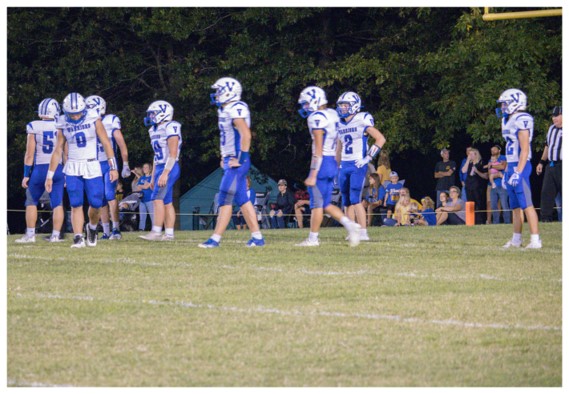 The Valle Catholic Warriors Varsity Football team beats the St. Vincent Indians 56-14 on Friday and move to 3-0. Next, the Warriors take on St. Dominic on Friday, September 17th.

Another week, another Valle Catholic blowout win. It’s starting to become a theme. The Valle Catholic Warriors Varsity Football Team put a 56-14 beatdown on the St. Vincent Indians on Friday.

The Warriors wasted no time asserting their dominance in this one. They didn’t even have to be on offense to score first. Luke McClure picked off St. Vincent and ran it back 27 yards for a touchdown and gave Valle the lead. Shortly after Bryce Giesler ran in a touchdown from 11 yards out and put his team ahead 14-0.

The Indians came out of the half and scored once again on another touchdown pass. That made it 14 unanswered points. All that did was anger the Warriors, and they picked up right where they left off. Giesler found the endzone twice in the third quarter, both times on short runs. Carson Tucker put his name in the scorebook as well with a whopping 62-yard touchdown that capped off a 22-point third quarter for the Warriors.

Valle scored once more in the fourth off of a 50-yard run from Alex Viox. That secured the 56-14 victory and moved the Warriors to 3-0.

“Our team is running the ball extremely well right now,” Aiden Heberlie said. “I think that we are not even close to our full potential right now and if we can keep working hard in practice and getting better each week, we can reach our full potential when it matters most.”

The Warrior defense did a great job of bottling up the Indians’ game plan. Tucker and Josh Bieser led the team in tackles with seven each. Tucker also had the pick-six. Tim Okenfuss was right behind with five and a half tackles of his own.

Valle continues to knock off anyone in their path. They are outsourcing their opponents 152-28 and have yet to be seriously challenged. The Warriors look to keep their momentum going into week four when they travel to St. Dominic to take on the Crusaders on Friday, September 17th. After that, Valle will finally get to play some home games.