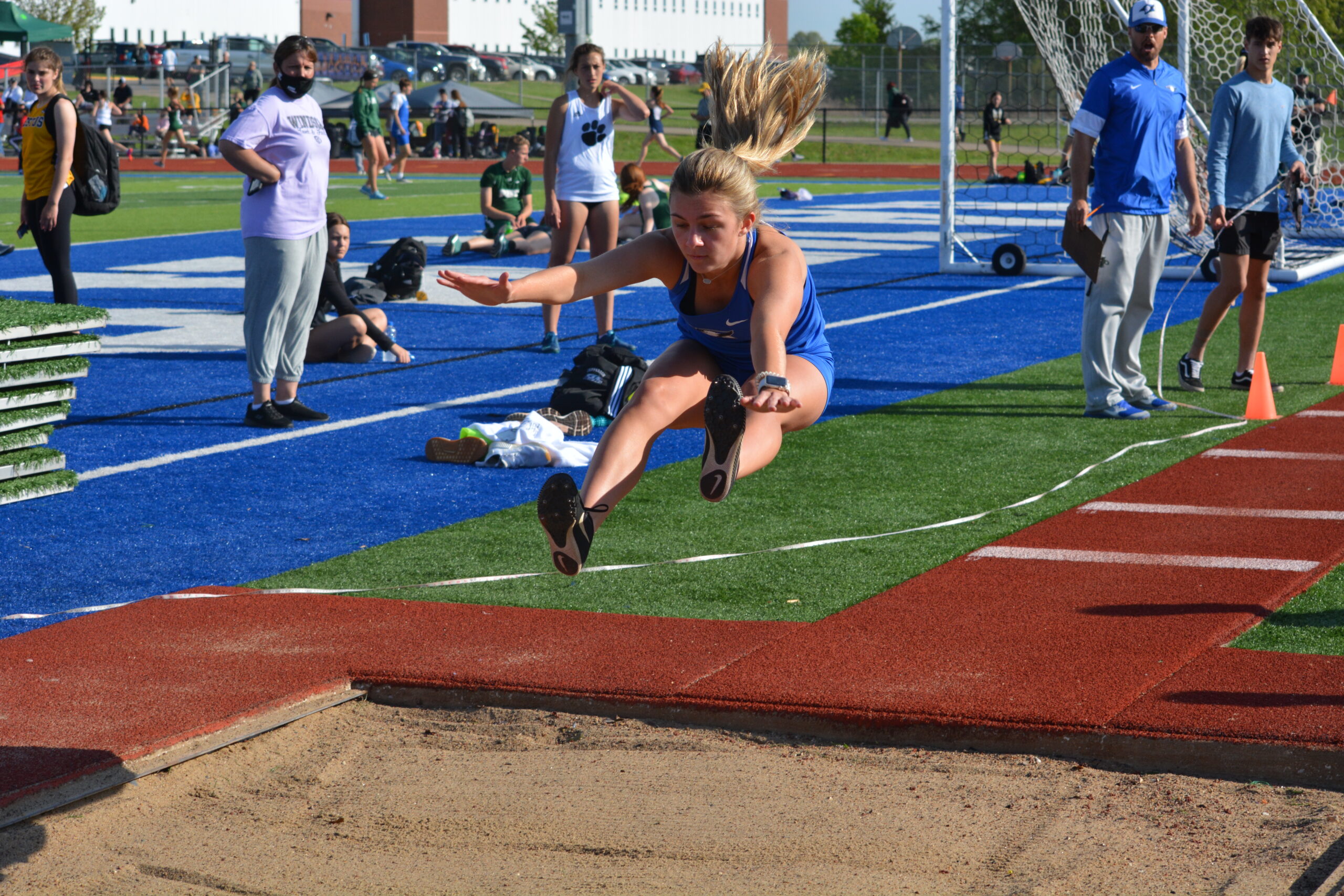 It was an incredible day for the Jefferson R-7 Blue Jays on the track and in the field as the Girls team wins the meet for the seventh straight year, and the Boys take fourth.

This past Saturday, May 8th, the Jefferson R-7 Blue Jays Boys and Girls Varsity Track teams competed in the Class 2, District 1 track meet in Dexter, MO.

The Girls squad had a tremendous performance, winning the meet outright for the seventh straight season! The team also qualified competitors from 13 events for the next round of competition, the Sectional meet, coming this Saturday at South Callaway.

The Boys team had a great showing as well, placing fourth as a team. They were also able to qualify athletes in seven events for Sectionals.

In the results for the girls, the top three performers were Catryn Cattoor, Laney Smith and Kyla Allen.

Cattoor made it through in all four events and won Discus and Shot Put. Her toss in the Shot Put was 34’8.25”, and in the Discus her throw was 108’2”. Cattoor stated, “I’ve been really focused on my mechanics this week, working on staying smooth and finishing high in both shot and disc.”

Smith made it through in all four events as well, including a second place finish in the High Jump with a leap of 4’10.25”, and fourth place in the Triple Jump with a distance of 32’1.5”.

Reagan Kennedy advanced in the 300m Hurdles with a time of 54.48. Kennedy commented on her day, “Districts went well for both the team and I. This week we are pushing ourselves with workouts specific to each individual in hopes that it will improve our times.”

Maddie Edmond and Brittany Bittick advanced as well in the Pole Vault. Edmond cleared 8’0.5” to take second place, and Bittick took fourth with a vault of 5’7”. Bittick talked about what she’s working on this week, and said, “For sectionals I’m really working on consistent steps to create the correct plant for my vault.”

Riley Duvall placed fifth in the 400m with a time of 1:10.19. Duvall mentioned, “I was focused on not letting my team down and trying to push myself harder than I ever have before.”

In the Discus, Riley Jackson took fourth with a throw of 83’.

Allison Campbell took third in the Javelin with a throw of 97’2”.

Head Coach Justin Horn exclaimed, “I am extremely proud of how the girls did at the District Track meet!”

In the Boys event results, Sean Usery and Kayden Rundel qualified in the 110m Hurdles. Usery’s time of 17.96 was good for third place, and Rundel was right behind him in fourth with a time of 18.90.

Usery spoke on what his team can do to improve, “To prepare for Sectionals, the team definitely needs to stay in shape and critique different things such as handoffs and block starts, anything to improve our times.”

Rundel had much to say on his District outing, “My performance and my team’s performance were very grid iron. We worked hard and pushed ourselves to new levels, not only physically, but mentally. I was successful in the field events, getting a new personal record. In my Hurdle events, I attempted to get a quicker personal best and succeeded.” He continued, “Overall our team exceeded our own expectations, along with our coaches as well. We couldn’t have done it without our competitive will to win, and our teammates, coaches and families cheering, pushing and supporting us.”

Chase Politte qualified in three of his four events, including a second place finish in the 300m Hurdles with a time of 43.95. Politte exclaimed, “I liked our relay teams’ performances. We worked well together because we’ve been pushing ourselves on the handoffs and will continue to get better so we can go to State. For 300 Hurdles, there are a few hurdles that I stutter before, so working out the kinks before the Sectional meet will hopefully earn me a spot at State.”

In the Shot Put, Konner Armstrong took third with a toss of 42’6”, which qualified him for Sectionals as well. Armstong is still improving, and said, “I’m working on just getting more explosive and getting in the mindset for what I’ve got to do make it to State.”

Said Coach Horn, “We are looking forward to another highly competitive week on both sides at Sectionals!”

The Blue Jays have less than a week to prepare to compete in the next round of the MO State tournament, the Sectional meet, which will happen this Saturday, May 15th, at South Callaway.