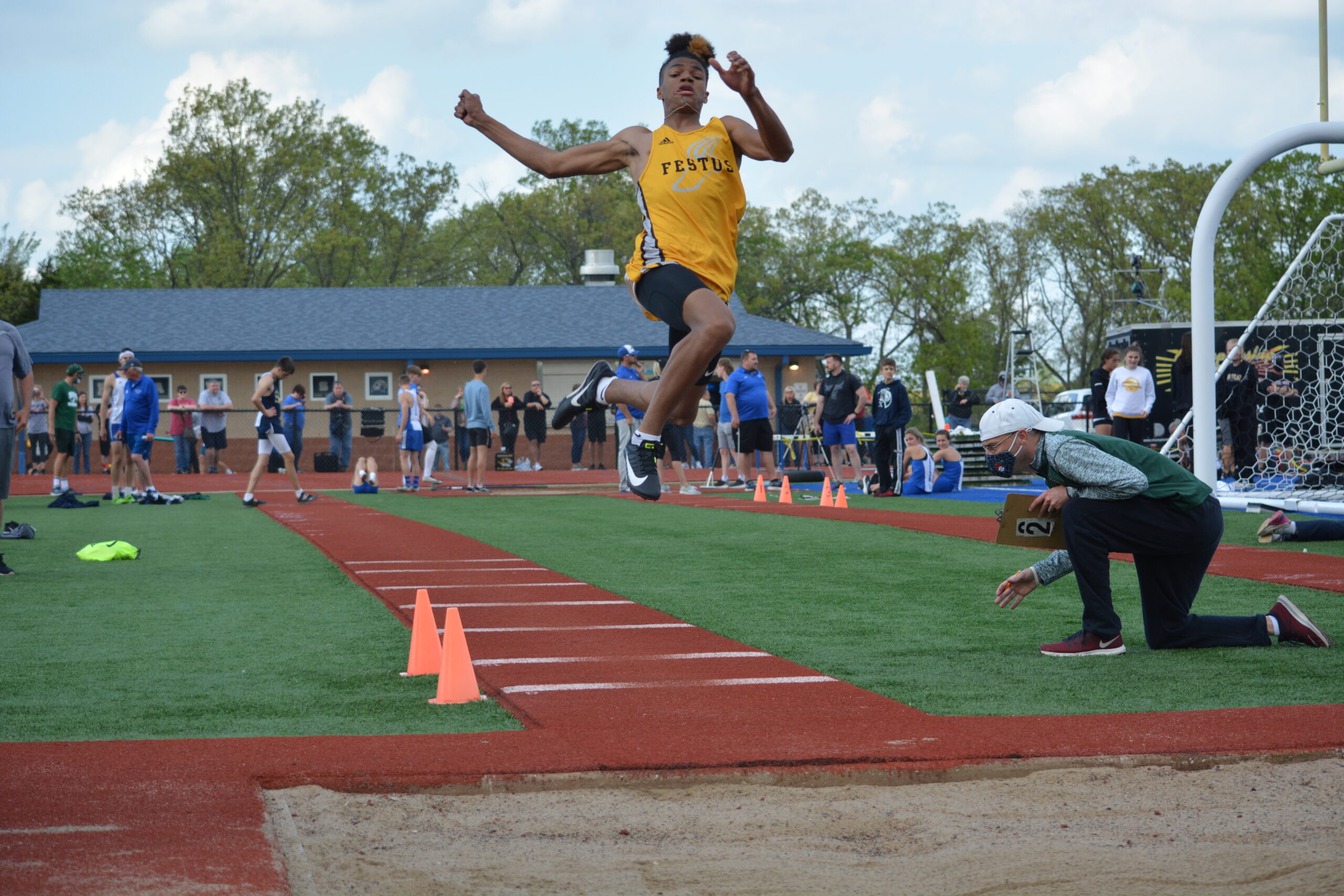 Out of 18 schools, the Festus Tiger Boys Varsity Track team takes second place with 95 team points in the Hillsboro Invitational. The Girls Varsity team finishes in fifth with 60 team points.

On Friday, May 7th, at Hillsboro High School, the Festus Boys and Girls Varsity Track teams took to the track and field to compete amongst 18 of the best schools in the area.

The Boys squad had an incredible showing, bringing home the second place trophy with 95 team points.

Head Coach Chris Partney commented, “The Hillsboro Invitational is a great meet to tune up some events and athletes for the upcoming District meet. It’s a great opportunity to hand-pick a few events to look at one last time before making District entry decisions.”

Nathan Wolk also improved his personal best in the 800m Run with a time of 2:03.44. Partney noted, “This is a huge personal record for an athlete who continues to improve and impress every meet.”

The 4×200m team of Roberts-Day, Cayse Martin, Austin Anderson and Reece Johnson set a team best record with a time of 1:35.26. This time improved their position for next Saturday’s District meet.

Cullen Krieg had an excellent performance in the 1600m Run, winning the event with a time of 4:30.8. Krieg said he can still improve, and quipped, “I will definitely work harder on my closes for my races, but I now believe that I’m in good physical shape for Districts. I just need to work on my mindset that I’m going to have to work, even when it gets tough, to accomplish what I want.”

Setting a new personal best in the Triple Jump was Cayden Glaze. He jumped 41’1” for a sixth place finish.

In just his fourth meet of the year, Aidan Grant put up a nice vault of 13’6” to earn the Silver Medal.

In the Javelin thrown, Austin Anderson took home the Silver Medal with a throw of 169’5” in just his third meet.

On the Girls side, Festus made some adjustments to their usual lineup in an attempt to look at different possibilities for the next week’s District meet.

In the Discus, Taylor McMillin took home the Silver Medal with a distance of 114’1”. It was a new personal best for her.

The 4x200m Relay team of Gabbie Burkard, Presley Perry, Angela Bloodworth and Alexis Biehle brought home a Bronze Medal with a time of 1:53.41.

The 4x100m Relay team of Kinsey Benack, Burkard, Sophie Nolen and Biehle finished in third place as well with a time of 52.59.

In the individual race results, Benack placed fourth in the 100m with a great time of 13.73.

Taking fourth place in the Pole Vault was Nolen, clearing 9’6”.

Kayla Roberts-Day took fifth place in the Shot Put with a throw of 34’1”, which was a new personal record for her.

Head Coach Wesley Armbruster offered some comments on a few of his athletes. He said, “Nolen and Ella Shy have been consistent performers for us this year. We’ve asked them to try many different things, but now that we are focusing down on their primary events we are seeing some tremendous improvement.”

Armbruster continued, “In the sprint relays, while we were hoping for faster times, we are still happy with two third place finishes. We rearranged the order in both relays to see how we liked it before Districts and we saw a couple of things we loved and some things we need to adjust.”

Commenting on the throwers, Armbruster stated, “Over the last month Roberts-Day has been one of our most improved performers. Everything is starting to click for her and she has established herself as one of the top shot putters in the area, and we love that she is just a Sophomore. She has a very bright future, but we are excited about the potential she has over the next month.” He continued, “McMillin has been one of the top discus throwers in the area going back to the first meet of the season. We still believe the best is yet to come for them both as they hope to make some noise over the next two weeks.”

Coming up next for the Tigers is the District Championships next Saturday, May 15th, hosted by Festus. The team will have one final week to prepare to have their best performances of the year, on the biggest stage so far this season.