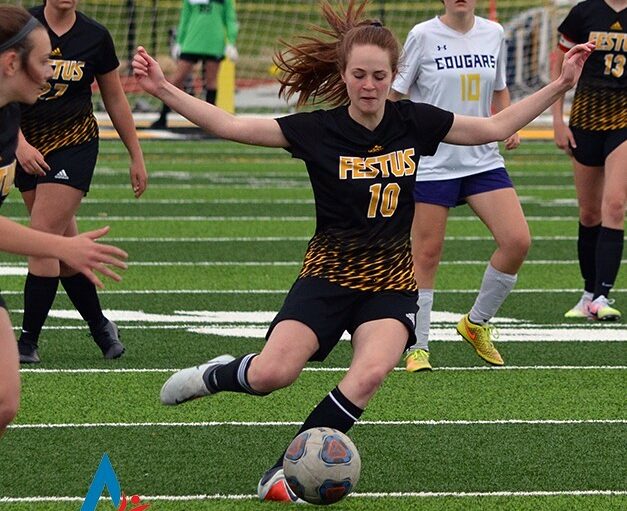 It was another tough outing from the Tigers, who suffer a 2-0 loss to Affton, leaving their current record at just 2-11.

On Friday, April 23, the Festus Lady Tigers challenged Affton in a home Varsity soccer match. For the second straight day, the Tigers failed to produce a goal, which led to another disappointing loss for the young program. This time it was Affton who put two goals on the board to beat Festus, making their record now 2-11.

Head Coach Caleb Zustiak was upset with the outcome, and said, “This game was disappointing in that we had the lion’s share of possession and quality attacks but were extremely unlucky with our finishing. We had three open shots go wide and two shots off the post. We have to learn to finish the chances we’re given.”

Zustiak knows his squad can play better than they have the last two games. He said, “I fully believe we were the better team this game and the stats reflect that, but I can’t argue that Affton finished their chances and we didn’t. It is frustrating to lose a game you should have won, but there are important lessons to that as well.”

Affton got on the board at the 16 minute mark of the first half. The Tigers held them to only one goal for the first 40 minutes. In the second half, Affton added another goal only eight minutes into play. That was all that was needed to secure the win. In fact, Festus had 10 shots on goal, while Affton only had four. Festus just couldn’t finish their chances.

Always one to find a positive takeaway, Zustiak commented, “Emily Holt is the perfect striker for a soccer team. She works for every ball, pushes the entire game, and gives her entire self to the fight on the field. She has the majority of our goals this season and is irreplaceable as an attacking force.”

Holt commented on the game, and said, “It should have been a more competitive game for us. We did not have good first touches, and were not going to the ball. We had many opportunities for shots on goal, but we couldn’t get any to hit the back of the net. It was an upsetting loss.”

Another player that could make a big impact is Summer Sansoucie. Zustiak noted, “Sansoucie has returned after an early season injury. She will also make a difference on defense, giving us more options and a rotation to hopefully keep our back line fresh for the entire game.”

Hopefully the positive attitude will continue as the Tigers look ahead to next week, where they will play St. Clair on Monday and Bayless on Wednesday.