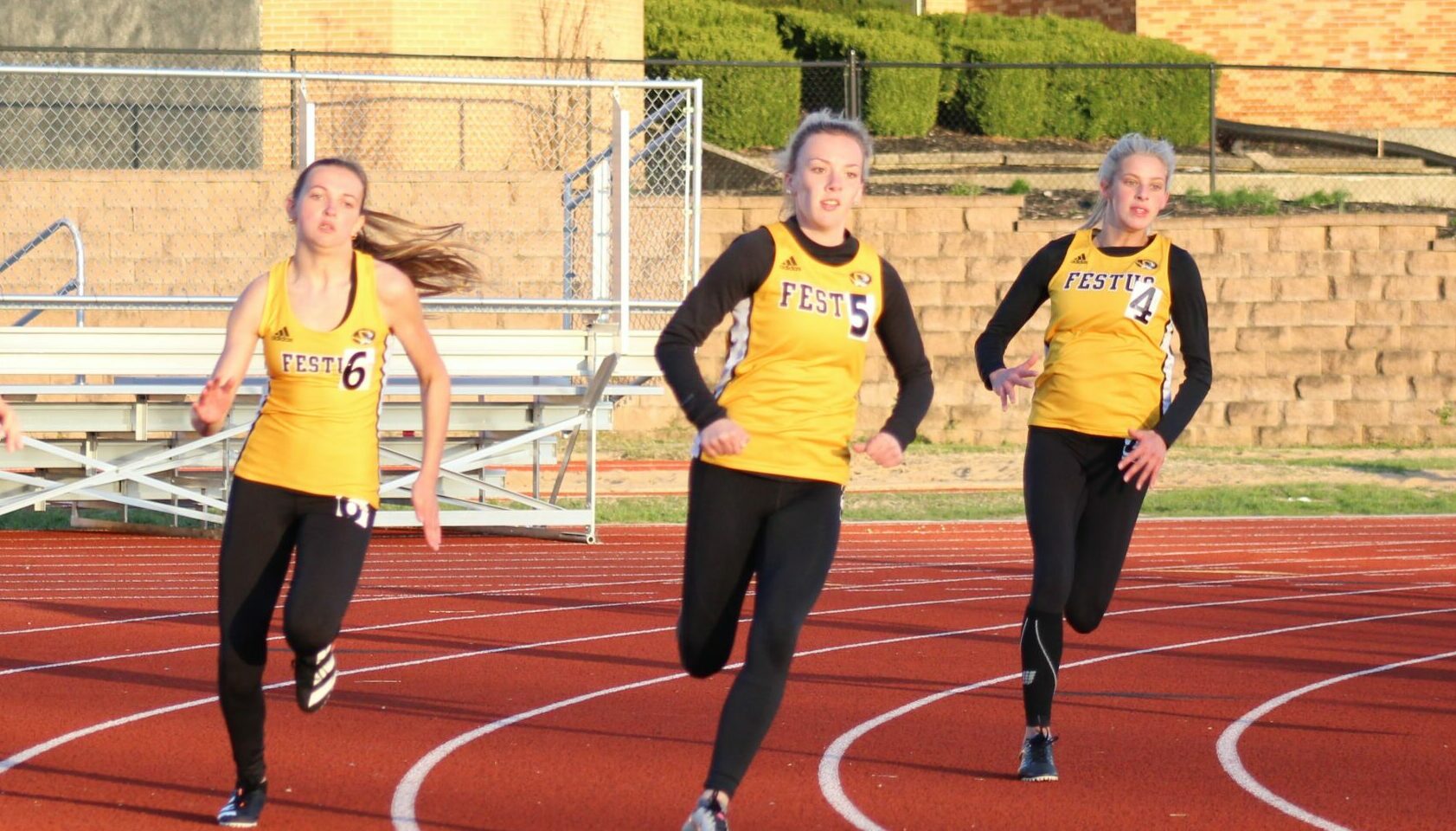 On Tuesday, April 13th, the Festus Tigers Varsity Track team hosted its annual event, the Tigertown Invitational. It was an impressive showing by the Tigers, as the Girls team won the event, and the Boys team came in second.

The Girls Track team put on an incredible display in their home event, winning first place over 11 other schools. The team put forth an amazing effort to score 126.5 points to win the team title. Head Coach Wesley Armbruster said, “We outpointed a very talented Jackson team by fourteen points on the way to victory. The Jackson Indians had previously outpointed the Tigers at both the Notre Dame Frozen Invitational and the Farmington Quad.

Alexis Biehle had a great showing, setting personal records in both the 100m and 200m, coming in fifth an third place respectively. Said Armbruster, “Alexis had her best day of the season, just a few days after what she would probably consider a not-so-stellar day Saturday. We like resilient athletes and Alexis rebounded with her season’s best performances in the 100m and 200m Dashes, setting new team-best marks in both events. She also ran important legs of the 4x100m and 4x400m relays, which are two critical relays for us going forward.”

Biehle was happy with her outing and said, “I set a personal record in the 100 and 200 meter dash. My 4×100 team won first and my 4×400 team improved tremendously from the previous meet. As a whole the team showed up ready to compete and our hard work paid off.”

Dari White cropped another eight seconds off her 1600m time to a team leading 5:30, to earn second place. White also ran with Liv Barnett, Molly McDaniel and Allison Faerber to place second in the 4x800m Relay.

Maddie Caskanett and Lauren Hartman ran the 3200m under 12:45, an impressive time.

Then 4x100m Relay continues to shine, as they took first place for the third consecutive meet. This time they set a new season best. Kinsey Benack, Biehle, Angela Bloodworth and Gabbi Burkard finished the race in 52.12 seconds. Commenting on the performances, Armbruster said, “We continue to cycle different athletes onto the 4x100m relay and we gave Benack, Biehle, Burkard and Bloodworth the chance Tuesday. Based on current 100m times, those are our four fastest athletes and we liked the way they competed at Tigertown.”

Benack was pumped up and said, “We took first and had our season best time. We are very excited and hope to keep getting better in the event every meet!”

Burkard also had success in the Triple Jump, taking second place. Armbruster noted, “Gabbi is still very new to the event as Tuesday was only her third time competing in the Triple Jump. We expect continued improvements from her as she develops under the tutelage of Coach Houston.”

Sophie Nolen also jumped well, finishing third in the Long Jump and Pole Vault, setting new personal bests in each. Armbruster has been pleased with Nolen so far, and said, “We continue to look for ways to become a complete team and exploring athletes in new events is something we will continue to do over the next few weeks. Sophie, now a Junior, was a contributor for us in the jumping events two years ago. We presented her with a plan to focus on the pole vault with a long-term vision in place and she has made tremendous progress this year.”

Taylor McMillin won the Discus, setting a new personal best of 33.09m. Armbruster noted, “Taylor has been someone who we’ve always viewed as a talented athlete. She put in a tremendous offseason and set some big early-season PRs, but didn’t have her best day last Saturday at Mineral Area. She rebounded Tuesday, setting another personal record.”

Armbruster summed up the day by saying, “I felt like this was the first time this season we showed what kind of team we could be. We’ve had some team success up to this point, but Tuesday we saw our athletes not just run races, but race them. Our coaching staff is very proud of the way our kids competed.”

Festus had a great showing in the 4x800m Relay, with the A squad coming in first, and the B squad placing second.

In the 800m Run, the Tigers swept the event. Ian Schram finished first with a time of 1:58.20. Behind him was Cullen Krieg in second and Jacob Meyers who took third.

Both the Girls and Boys teams will be competing in the Simpson Relays on Friday, April 16th.