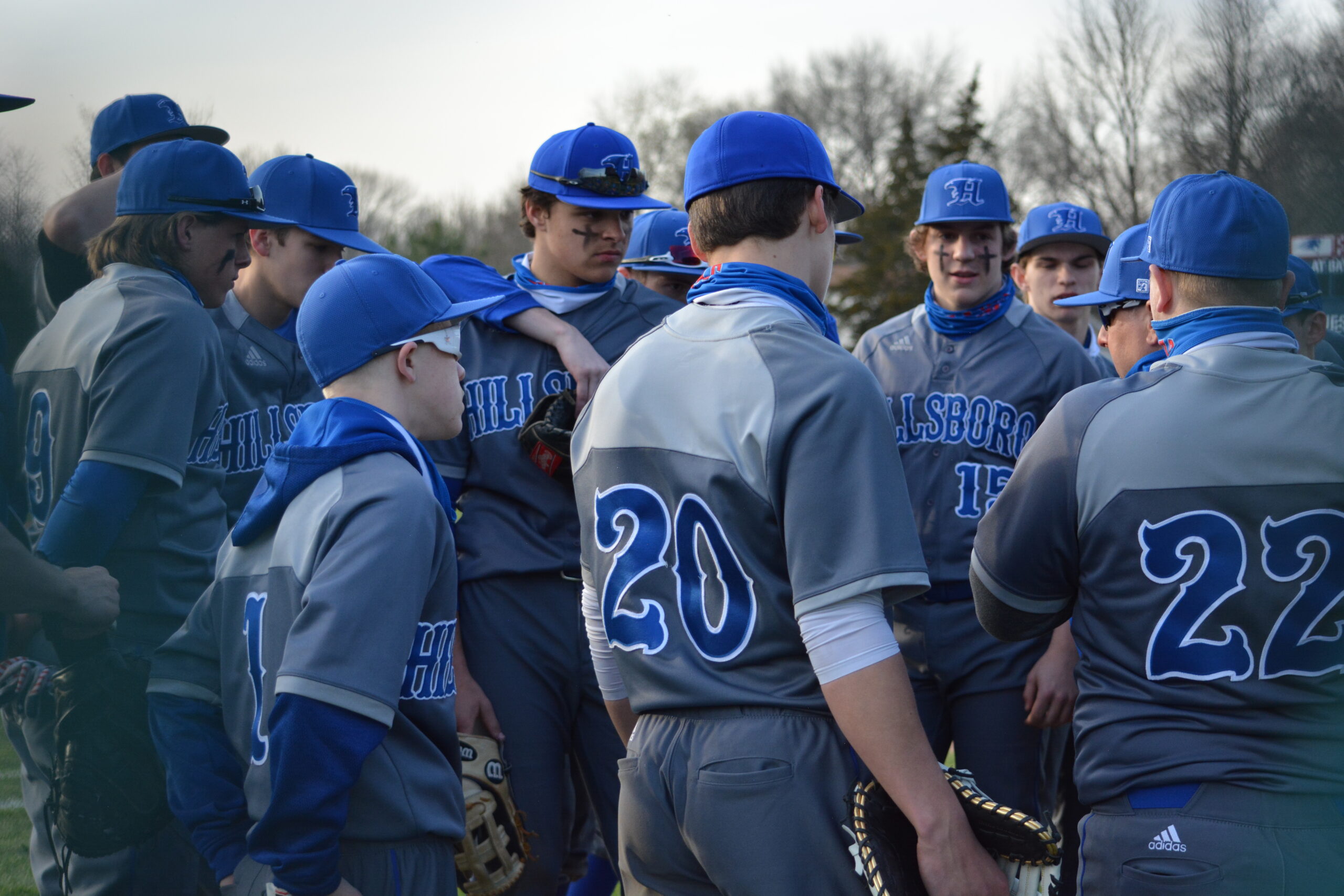 The Hillsboro Hawks Varsity Baseball team wakes up their bats against St. Clair, but a final-inning rally spoils the Hawks home opener. They fall 9-8 in heart-breaking fashion.

Despite putting eight runs on the board on Wednesday, March 31st, the Hillsboro Hawks could not top the St. Clair Bulldogs, as they fell 9-8 in their home opener.

Hillsboro fell behind by two runs in the top of the first, but was able to cut that lead in half following an Austin Romaine single that scored Cruz Valencia.  Valencia was one of three batters that were hit by pitches in the inning. St. Clair pulled further ahead in the second and third innings, scoring three runs to move ahead 5-1.

Facing a four-run deficit in the third, Hillsboro got to work. Gabe King hit a double to deep right to start off the rally and was moved to third on a Noah Shuman single. Connor Jenkins drove in King with a sacrifice fly to right, and Romaine laced a triple into the right center gap. Designated hitter Andrew Chaves then scored Romaine with a single up the middle. Catcher Tyler Watson reached base on a single, and both Watson and Chaves were brought home when Junior Arnold doubled to left field. The Hawks scored five runs in the third inning, giving them a one-run lead entering the fourth.

The Bulldogs tied it up at 6-6 in the top of the fourth, but Hillsboro was not done. Center fielder Zach Whaley led off with a single up the middle, followed by King who reached base on a walk. A passed ball then allowed both baserunners to advance. Jenkins topped his seven pitch at bat off with a double, and the Hawks pulled ahead 8-6.

Both teams went quietly in the fifth and sixth, but St. Clair scored 3 runs in the top of the seventh on a parade of singles, giving them the 9-8 lead going into the home half. Romaine gave the Hawks a chance to tie the game again with a lead-off single, his fourth hit of the game, but Hillsboro was not able to plate another run, and ultimately fell by the aforementioned score.

King was on the hill for Hillsboro. The lefty surrendered five runs on eight hits over three innings, walking one. “We have shown bright spots [throughout] our young season,” King said, “but we have to put it all together to turn this season around. I thought that Junior [Arnold] pitched really well after he came into the game.” Arnold threw four innings in relief, giving up four runs on seven hits. Only three runs were earned.

Romaine was 4-4 at the plate, with a triple and three singles. “My approach tonight was to just keep my weight back and drive something through a gap,” Romaine said. “I feel I’ve been way out in front of everything these first few games.”

Despite the 0-4 start, the Hawks are focused on improvement. “I feel we just need to get locked in and start competing at the plate, on the mound, and in the field,” Romaine said. “I feel we are a really good team, we just need to find it and get rolling.”

His teammate agreed. “We couldn’t get our bats going until the third inning. Once we started hitting we immediately came back and were leading the game.” Chaves said, “Our pitching was great with only a couple small adjustments that were made during the game. All in all, we played hard but just need to clean up a few things.”

Head Coach Kevin Lucas noted his team’s positive strides. “We continue to give ourselves a chance to win but just can’t finish it,” Lucas said. “We’re still doing some very good things, but we have to start putting it all together to get over that hump. Right now, I think we have some guys pressing too much. We need to relax a little and just play the game.”

Hillsboro has a five-day break before their next game on Monday, April 5th at Farmington. After that, they play three games in four days, first at Potosi, then a home-and-home against De Soto.