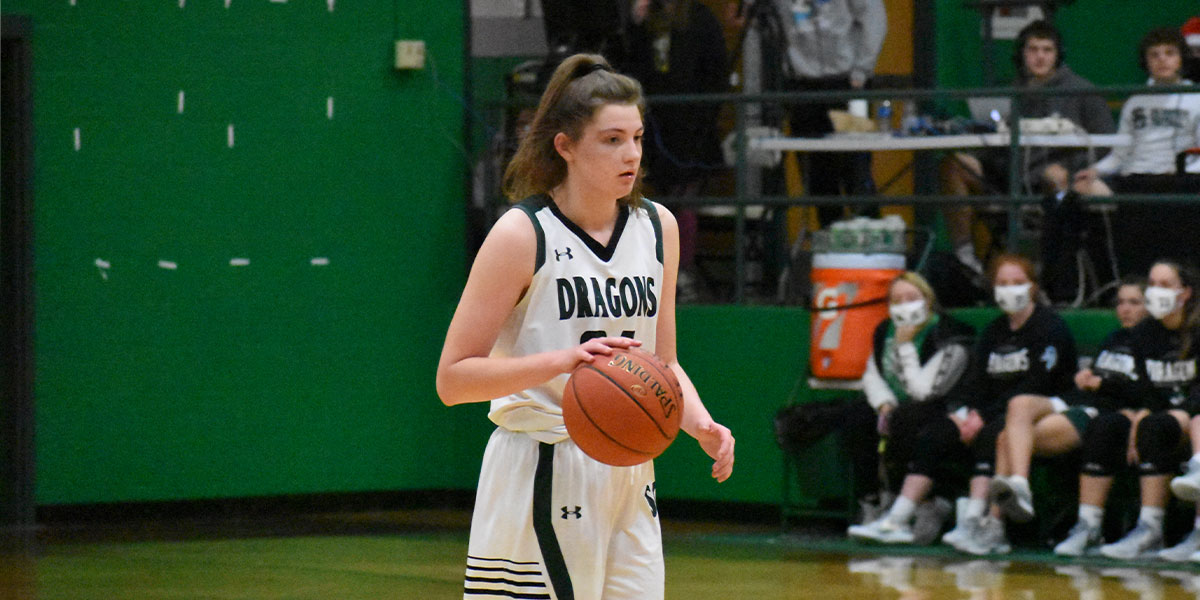 The Ste. Genevieve Lady Dragons cap off their regular season with wins over the Perryville Lady Pirates and the Francis Howell North Knights, bumping their record to 17-5. The Dragons take on the winner of St. Clair and Potosi in the district semi-finals on Tuesday, March 2nd.

The Ste. Genevieve Dragons Girls Varsity Basketball squad bounced back from their loss to Steelville with wins over the Perryville Lady Pirates 70-43 on Monday and the Francis Howell North Knights 51-44 on Tuesday.

Steelville ended the Dragons’ 11-game winning streak nine days ago, and Ste. Gen. was eager to get back in action and pick up a few more wins before the start of their District Tournament. They started hot against Perryville. Maci Reynolds scored ten points in the first quarter, which was the start of a big night for her. Marysa Flieg helped out with a few baskets as well and the Dragons went into the second quarter with a 16-7 lead.

The Pirates saw a bit more success offensively in the second quarter. However, so did the Dragons. Reynolds scored eight more in the second while Megan Aubuchon and Abby Moore both helped out with four points each. Ste. Gen. scored 22 in the second and held Perryville to 16, giving the Dragons a 38-23 lead at the half.

Ste. Gen. came out of the locker room and kept their foot on the gas. Flieg had her most productive quarter of the day with ten points in the third. Reynolds hit two shots from beyond the arc, the Dragons added to their lead and held Perryville’s offense in check. Ste. Gen held a 62-33 advantage heading into the final eight minutes. The Dragons held the Pirates down and locked up the win in the fourth by a final score of 70-43.

Reynolds had a huge night offensively and led all scorers with 27 points. She was scorching hot all night and hit seven shots from three-point land. Flieg was second on the team in scoring with 16. Moore scored ten, Aubuchon had nine and Sydney Bumgardaner had five.

Next, the Dragons ran up against Francis Howell North. It was a much more tightly contested battle in their last regular-season game of the season. Aubuchon got things started for Ste. Gen with five points in the first quarter. Reynolds had four in the first and helped the Dragons to an 11-9 lead by the start of the second.

Bumgardaner put her name in the scorebook in the second quarter with seven points. Aubuchon helped out and added four more points to her total on the way to 12 in the quarter for Ste. Gen. However, the Knights scored 11 in the second and made it hard for the Dragons to extend their lead. Ste. Gen led just 23-20 at halftime.

The game stayed tight into the second half. Flieg and Reynolds kept things going on offense and both scored four in the third quarter. The Dragons put up 12 in the third, but so did the Knights. Ste. Gen led by three heading into the final eight minutes.

The Dragons had their highest-scoring quarter of the day in the fourth. Flieg led the team with seven points in the frame while Aubuchon added four more points to her total. Reynolds made three free-throws as well and Ste. Gen ultimately locked things up. They won the fourth 16-12 and secured the 51-44 victory.

Ste. Genevieve now sits at 17-5 and awaits the start of their district tournament. Despite the hiccup against Steelville, the Dragons have been rolling for all of 2021. They have only lost two games since the new year and are headed into the post-season with some momentum on their side. The winner of Potosi and St. Clair earns the right to take on top-seeded Ste. Genevieve in the district semi-finals on Tuesday, March 2nd.