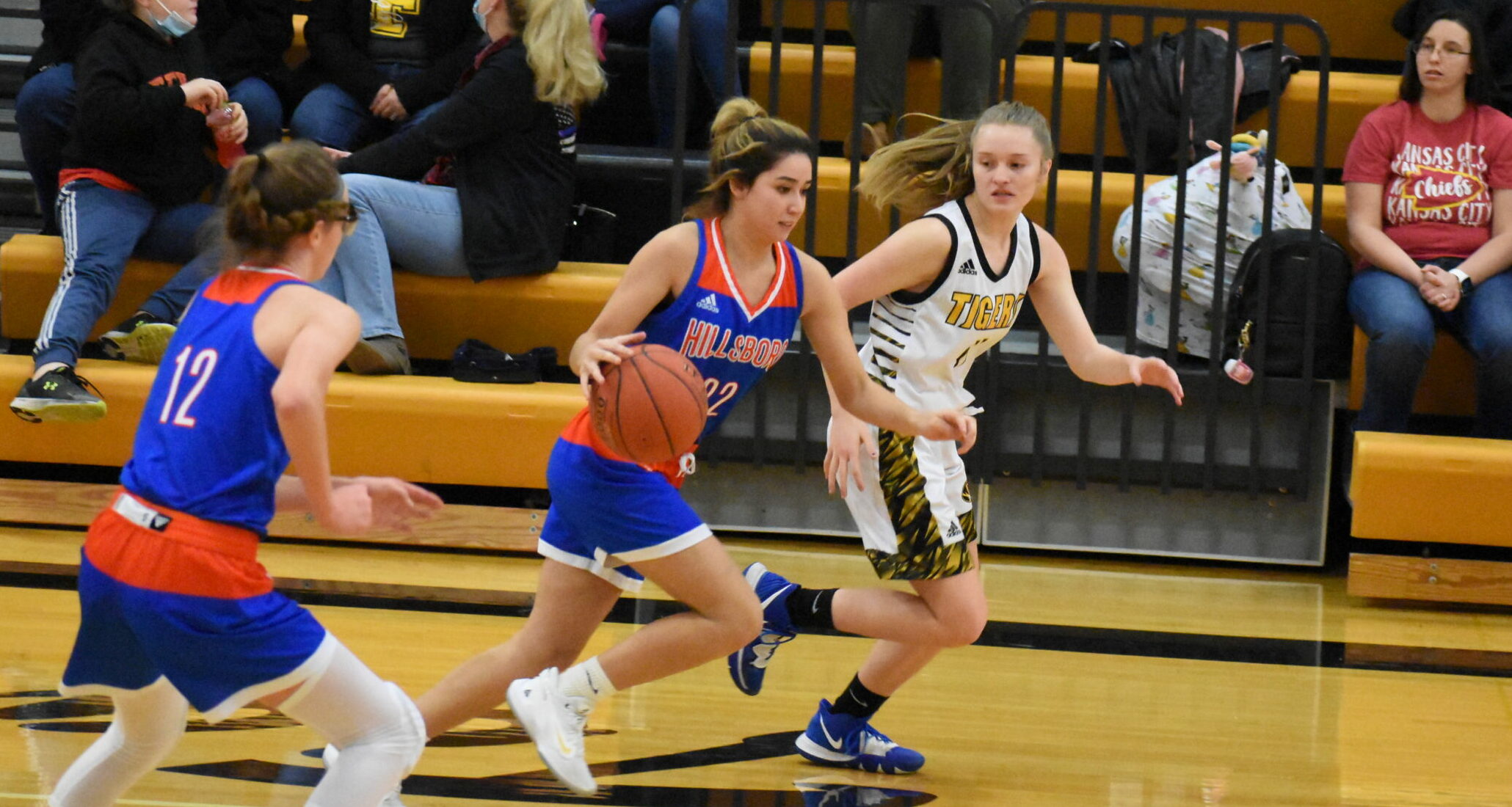 The Hillsboro Lady Hawks Varsity Basketball team climb a much needed mountain and finally defeat the rival Festus Tigers in a hard-fought 41-35 battle.

The Hillsboro Hawks Girls Varsity Basketball team finally broke their losing streak, and couldn’t have asked for a better opponent to break it against. After eight long years and eleven games in the Highway A rivalry, the Hawks won 41-35 over the Festus Tigers.

Having already played the Tigers once this season, the Hawks knew what to expect. That being said, the strong defense Hillsboro is known for showed up in full force, as they coerced Festus’ main shooters to take uncomfortable outside looks. Then the offense faced its challenges when Festus started with a full court press, but they still managed to find openings to put the Hawks up 9-7 lead at the end of the first quarter. 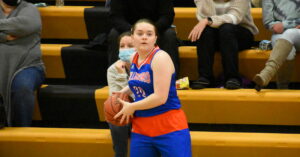 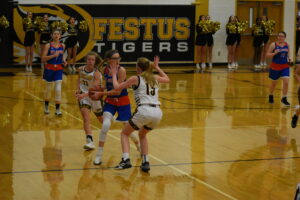 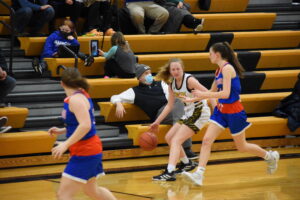 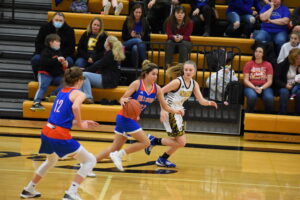 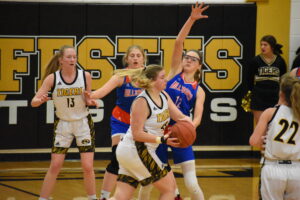 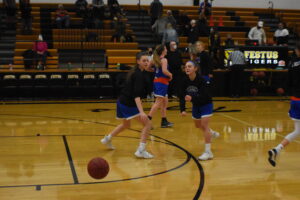 “It felt very rewarding,” Zoe Wood said. “Breaking our losing streak felt amazing, especially since our last losses have been such close games. We finally got a night where everything just worked for us. We didn’t let our offensive mistakes bring us down. Instead, they pushed us to work harder on defense. Overall, I’m extremely proud of our team for getting this win.”

The second quarter saw both teams find their footing on offense. Patience was the Hawks’ greatest ally. They took care of the ball, beating Festus’ press, and spreading out their defense to create gaps for drives. Hillsboro’s defense remained strong, keeping the Tigers out of the paint, and made them earn every shot they took from the outside. The Hawks went into halftime up 24-20.

The first three minutes coming back from halftime can make or break the game, and the Hawks made every minute count. They ran through their offensive plays extremely well, but couldn’t get the shots to fall. Thankfully their defense remained the star of the show, causing Festus to make turnovers and give the Hawks extra chances. Hillsboro went into the final quarter with a 32-29 lead.

The Hawks then found that extra push they had been missing in previous games and finished strong all the way to the end. On defense, they stifled the Tigers’ attack, keeping them scoreless until late in the quarter. Yet their offense stayed aggressive, determined to keep and extend the lead. Festus attempted to up the ante on their press and try to steal the lead, but ended up in foul trouble instead. This gave the Hawks a window to add five more to their side of the scoreboard off of free throws.

Then, thankfully, the buzzer sounded… handing the Hawks a 41-35 win.

“We did a good job in the second half, limiting the offensive rebounds and second chance points,” Head Coach Andrew Hubbard said. “The girls also did a great job, I thought, of contesting shots and not giving up easy baskets. Then in the fourth when Festus picked up the pressure, we did a little better this time handling it and not turning the ball over as much as we did the first time we played them.”

Scorers for the night were Kayla VanHorn with 17, Bailey Scallet with seven, Wood with six, Kaylee Hilton with five, Dyllan Day with four and Maya LaPlante with two.

The Hawks go on the road to take on the Grandview Eagles on February 8th. Tip-off is at 7:00 p.m. 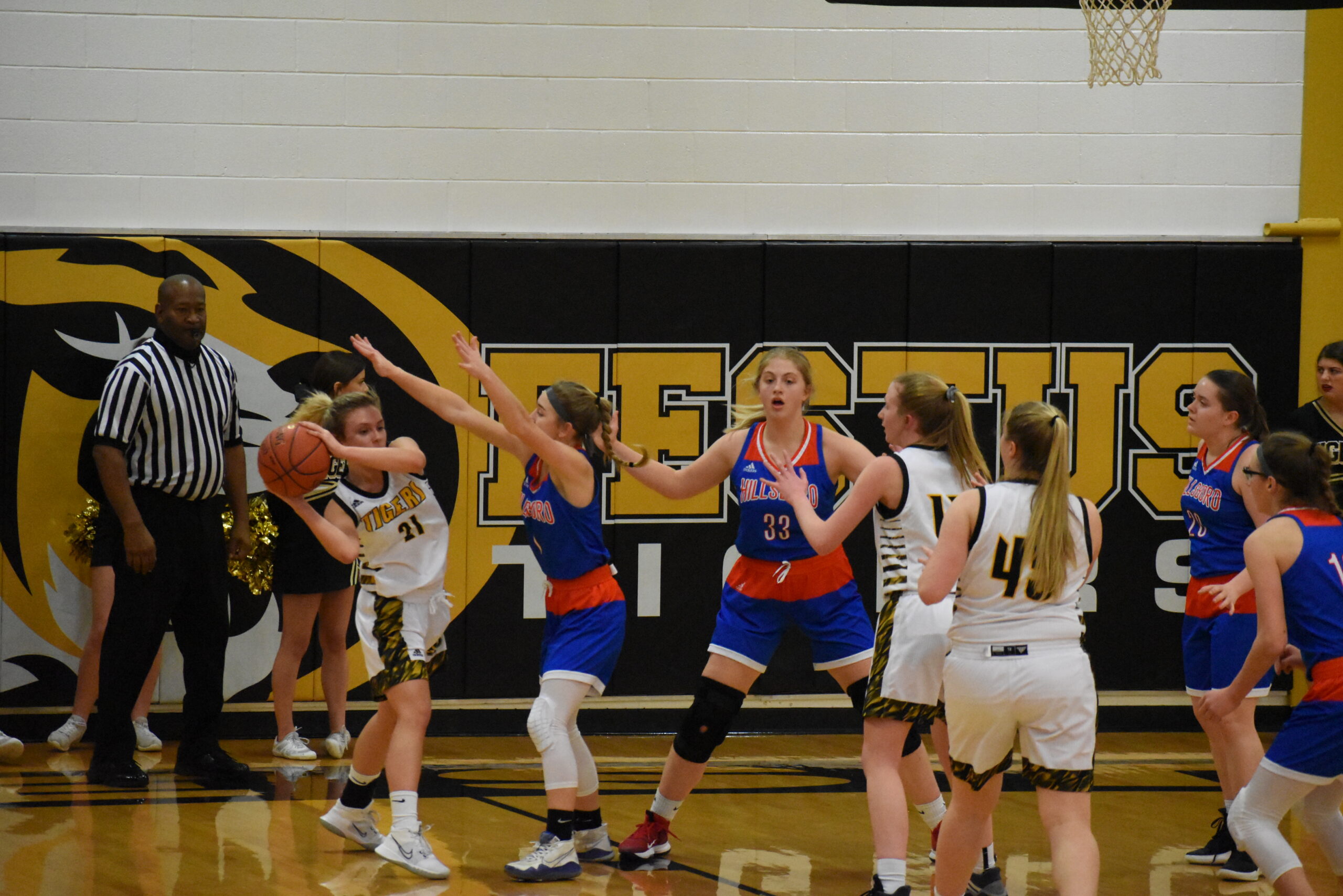