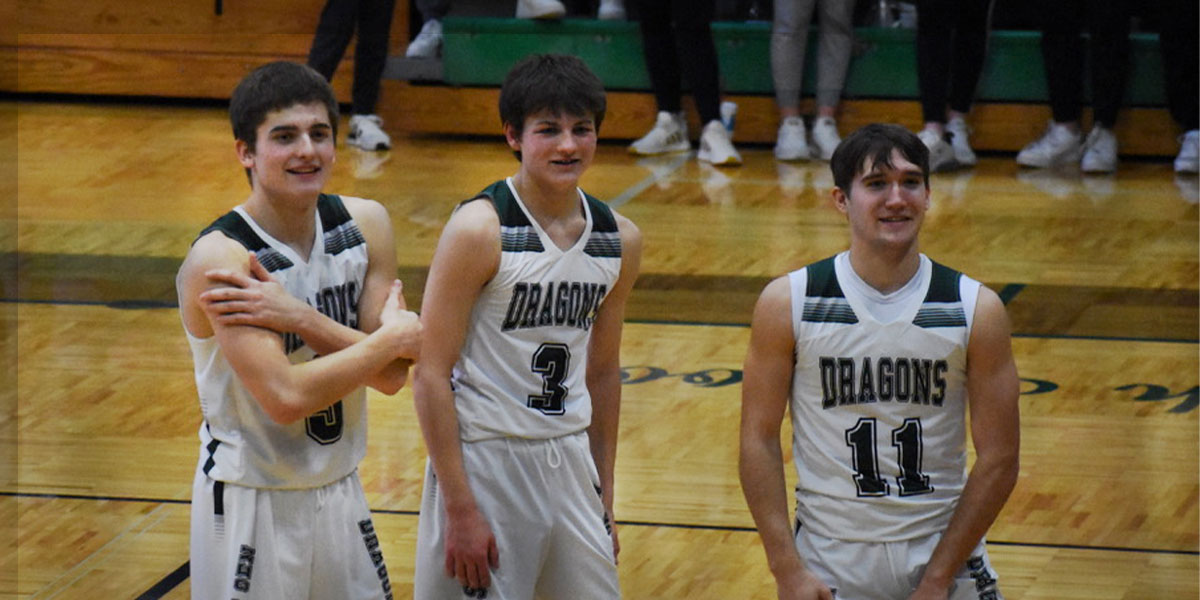 The Ste. Genevieve Dragons win a close one against the Park Hills Central Rebels on Tuesday to improve their record to 14-6. The Dragons historically struggle against the Rebels, but get the better of Park Hills in this one.

The Ste. Genevieve Dragons Boys Varsity squad snuck past the Park Hills Central Rebels 75-73 on Tuesday. The Dragons have historically struggled against Park Hills, going 3-16 against the Rebels since 2009, but they flipped the script in this one.

This was a fast-paced, high scoring battle straight from the opening tip. Anthony Nash got things going for the Dragons with seven points in the first quarter, while Aiden Boyer helped out with five points as well. However, the Rebels started just as fast on offense and held a 25-21 advantage at the start of the second.

Ste. Gen. kept the pressure on, as the Dragons continued to score and forced the Rebels to keep up. Blake Morganthaler caught fire and hit three shots from beyond the arc in the second quarter. Boyer and Rudy Flieg each contributed four in the quarter as well. Ste. Gen. outscored Park Hills 20-18 in the second and cut their lead to just two points by halftime.

“We always stuck with it, even when we were down at the end of the first half,” Logan Trollinger said. “We never gave up and started knocking down shots when it mattered.”

The Dragons continued to score the ball at will in the second half. Trollinger led the way in the third with eight points. Around midway through the quarter, Trollinger swiped a steal from the Rebels on an inbound pass after a made Ste. Gen. basket. He then threw a bullet pass over two Park Hills defenders that landed in the hands of a cutting Boyer, who nailed the layup to extend their lead to five. Ricky Hunter hit two shots from three-point land in the third and Ste. Gen. took a 63-59 lead into the final eight minutes.

The scoring slowed down for both sides in the fourth, but the intensity increased as the pace of the game quelled. Hunter hit another shot from deep, and Trollinger scored three more points as well. Trollinger made one of the most impactful plays of the game when he blocked a driving Rebel and gave his team possession when the score was tied 73-73 late in the fourth. One more basket was all the Dragons needed… and they got it. Ste. Gen won 75-73 and improved their record to 14-6.

“Our defense wasn’t great throughout the game, especially in the first quarter, we gave up a lot of points, but our guys played well,” Head Coach Rob Coleman said. “We did a great job against their zone moving the ball, finding shooters and getting the ball inside. I was proud of them for their mental toughness. It was a back and forth game and our guys made plays when we needed to.”

Boyer led the team with 17 points. Hunter and Morganthaler were just behind with 12 points of their own. Trollinger scored 11, all in the second half, while Flieg ended the game with ten and Nash with nine.

“We stuck together as a team down the stretch and we knew what we needed to do to win,” Nash said. “It was a big game for us and we wanted it.”

The Dragons have caught their stride at the right time. They have won ten of their last eleven games and are headed into the conference tournament clicking on all levels. The MAAA Conference Tournament begins Saturday, Feb. 6.