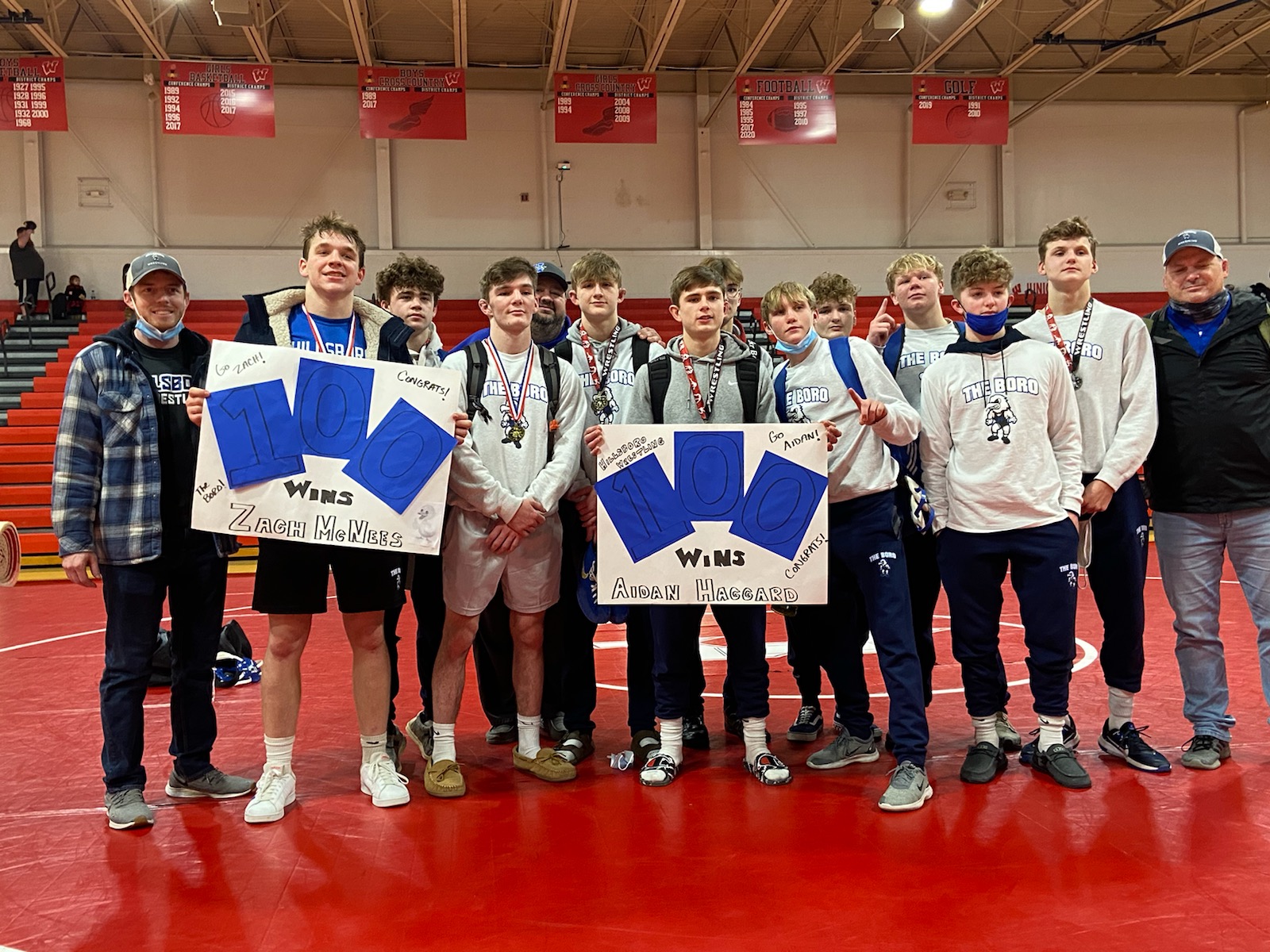 The Hillsboro Hawks Varsity Wrestlers soared into Warrenton with a chip on their shoulder, and then soared out with a Gold Medal. The Hillsboro wrestlers have been phenomenal this year, and on Saturday, January 30, nothing changed. The boys dominated the 11 other schools with 199 team points and look primed and ready to destroy everyone at the upcoming District Tournament. The Hawks entered 10 wrestlers into the tournament, and nine came home with individual medals, including five Gold.

Hawk grappler Dalton Litzsinger said his team knew what they wanted from this tournament. “Our team was looking to finish up the regular season with a couple of extra matches and so we went to Warrenton looking for a team title and for everyone to place third or higher. Nothing less. We did that and now we get two weeks to train hard and become mentally prepared for this state run we have all been looking forward to,” said Litzsinger.

Wrestling at the 113 lb. weight class was Gavin Alexander. He won all three matches, two by pin, and took home the Gold Medal.

At 120, Aidan Haggard took third place with a 1-1 record, while Sam Richardson, at 126, won first place, winning all three matches, one by pin.

At 132, Evan Morris placed second with a 2-1 record, with both wins coming by pin.

Litzsinger, at 138, took home the Gold Medal, winning two matches, both by pin. He commented on one match, and said, “I had a very tough opponent step on the strip across from me yesterday. He came into the match at 39-0 and I was exited for the challenge. It didn’t end how we expected it to end, but I still came out with the win and it happened better than we figured.”

Griffin Ray, at 152, won first place by winning two matches by pin. Ray capitalized when the openings came, and said, “I wrestled a great tournament and did really well with taking my opportunities when I had the chance.”

Mitchell had more to say on Ray, “He wrestled the Jackson kid in the finals again now two weeks in a row. This time Griffin dominated and ended up pinning him. That was a good win for him. His confidence is high right now. I’m excited to watch him finish.”

Nicholas Green, at 182, placed fourth, with a 2-2 record, with both wins coming via pin. Green was happy for the team’s win. He said, “At one point, it looked like we were in trouble, but then we came back and won. It was exciting.”

At 195, Zach McNees added to his Gold Medal collection, winning first place with a 3-0 record, with two pins.

Mitchell went on about McNees and Haggard, “I was excited to watch McNees win his last Varsity tournament as a senior. He and Haggard both eclipsed 100 wins in their careers. That’s cool to see. Their Freshman year was the same year I took over as head coach. It’s been fun to watch these two develop and become the men they are on and off the mat. I’m excited to watch them both finish off their careers in the next month and a half.”

The Hawks are off for two weeks until districts, which begin Saturday, February 13, at Farmington.
Litzsinger summed it up, “I’m very excited for my team and I to make this title run this year. We have 14 tough and motivated guys in our lineup and I can’t wait to see how things shake out!”
Go out and get it done, Hawks!
Hillsboro Varsity Wrestling Adds More Gold to Their Resume