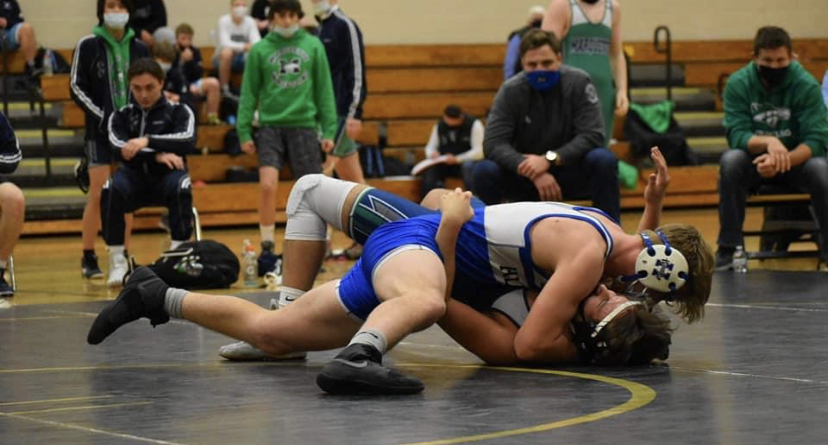 The Hillsboro Hawks Boys Varsity Wrestlers battle hard but lose a close dual to Lafayette, ending their undefeated streak at 22. They go 3-1 in the tournament, but suffer the sting of their first loss of the season.

For most teams, going 3-1 at a duals tournament would be an excellent outcome. However, the lone loss for the Hillsboro Hawks Boys Varsity Wrestling squad snapped their undefeated streak at 22 on Saturday, January 9, at the Lafayette duals tournament. Their current record of 25-1, is still a tremendous feat.

Nonetheless, the Class 3, fourth ranked Hawks wish they had that dual back, as they lost a few close matches against a stellar Lafayette team. Head Coach Matt Mitchell noted, “Hats off to Lafayette. They have a great team. This gives us some motivation heading into the last stretch of the regular season.”

Jarvis knows there is work to do, and said, “We just keep practicing all the fundamentals and will get better with it all.”

Mitchell commented on Haggard, and said, “He continues to impress me. Haggard is wrestling really well right now and is just dialed in on everything, on and off the wrestling mat.”

Next, Lafayette (Wildwood) defeated Hillsboro 41-30. Of the 13 contested weight classes, Hillsboro won five. Ray, John Bennett and Jarvis won by pin. Haggard and Blake Jackson won by decision. Ray commented on the loss, “The Lafayette dual should just fuel us and make us work harder, so back to work we go.”

Hillsboro then defeated Marquette 66-9. There were 13 contested weight classes, of which Hillsboro won 11. Haggard, Jackson, Richardson, Litzsinger, Bennett, Nicholas Green, Rhodes and Jarvis all won by pin. Ray, Eddie Hines and McNees each won by decision.

Hines said he’s been training hard in preparation, and commented, “I’ve been going with only people that push me in the practice room. I’m learning new things everyday, and that’s going to add more tools to my tool belt.”

Ray, in his own right, has been a stud throughout the season, and Mitchell likes what he sees. “He is a savvy wrestler that is always trying to figure the other guy out. He usually capitalizes on his opponent’s mistakes. We are excited to watch him make a state run this year,” said Mitchell.

Mitchell knows his team is good, but also that losing is an opportunity for learning. He said, “Overall, we wrestled well. We battled some adversity all day and took our first loss against a great class four team. It was good for us. We learned some things and now we get to go back in the room this week and make more adjustments. We are just focused on getting better each day.”

Rhodes agrees that more work is necessary, and said, “Simply put, we are going back to the room to practice and perfect our skills, and just keep improving every day.”

The Hawks look to turn the page and move forward as they will challenge Festus and Desoto on Wednesday, January 13.