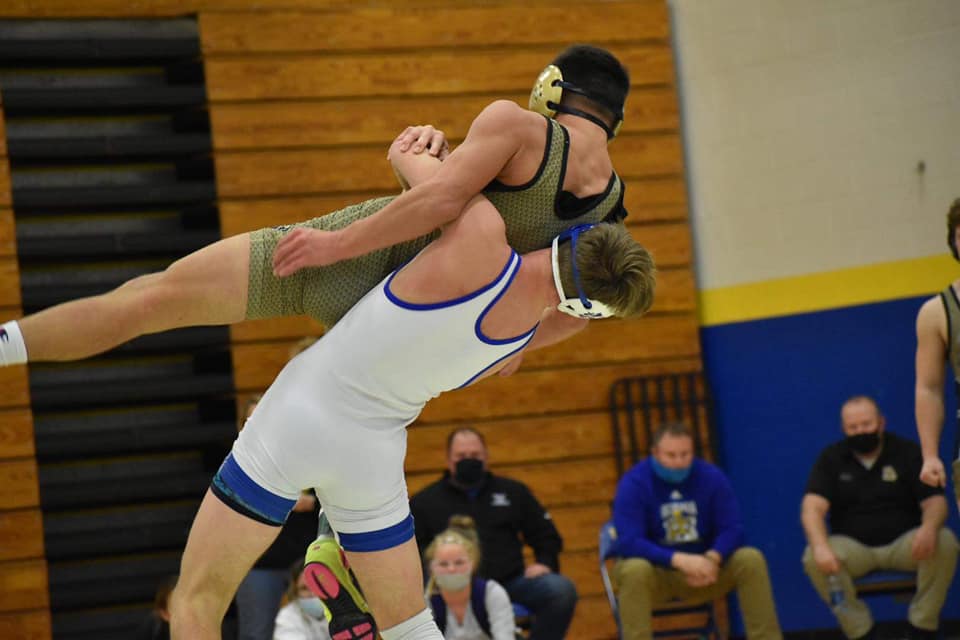 The Hillsboro Hawks Boys Varsity Wrestling team earned a hard fought dual victory 45-18 against Seckman, but the Girls Varsity team was defeated 45-12. The JV and Freshman teams were also in action, and both came out victorious.

On Wednesday December 16, the Hillsboro Hawks Wrestling squad competed against the Seckman Jaguars in an aggressive overall match. There were four duals on the night as both Boys and Girls Varsity competed, along with Junior Varsity and Freshman. The Boys Varsity team defeated Seckman by the score of 45-18, however, the Girls Varsity team was defeated 45-12.

Head Coach Matt Mitchell commented on the duals overall, and said, “We knew it would be a tough dual. Especially having seen Seckman a few weeks ago. They have good coaches there and we knew we had to be at the top of our game for tonight. We got back to a few simple things this week in practice. The team made some adjustments from our dual last week with Farmington. I was happy to see them execute against Seckman.”

It was a full dual for the boys Varsity team, as all weight classes were contested. Of the 14 matches, 10 were wins for Hillsboro, with four coming by way of pin. Gavin Alexander won his match at the 113 lb. weight class by pin at 3:42. At 120, Aidan Haggard won via major decision 11-0. Mitchell was impressed and noted, “Haggard had a great match. He pushed the pace the whole time and stayed in great position. We have really been working with him on he the little things and he did great tonight.”

Haggard said his team was really supportive, and said, “The Seckman dual was very fun. The environment was amazing. Seckman let their fans come but Hillsboro was not allowed any. With having no fans, every time Hillsboro had a victory the whole gym would be silent except for our team cheering each other on.”

Continuing to shine was Sam Richardson, who wrestled at 126, pinning his opponent at 3:21. Evan Morris was next at 132. He earned an 11-4 decision win. “Morris had a good win, getting some of his confidence back. He has had a tough schedule so far this year, but I think he is really growing from it and finding his own style of wrestling,” said Mitchell.

At 138, Dalton Litzsinger had a tremendous performance, winning 16-0 and earning at technical fall. Raymund Barnett, at 145, successfully won a 3-1 decision. Eddie Hines wrestled at 152, earning an 11-9 decision.

At 160, Griffin Ray had a tough battle, but lost 8-5. Said Mitchell, “Ray wrestled great. We are really excited about the improvements he has made. His opponent from Seckman might be the best kid in class four at 160. They had a back and forth match. He will learn from this and bounce back this weekend.”

Ray is excited about his team, and said, “We are wrestling as one and it’s good to see us competing at the level we are.”

Wrestling at 195 was Zach McNees. He performed well and came home with a 10-3 decision victory. Said Mitchell, “McNees avenged a loss from a few weeks ago. He wrestled really well. I was happy for him. That is a really tough kid from Seckman.”

McNees was pleased with the outcome and mentioned, “I’m very happy with how I wrestled. Right now my team and I are focused on the Smithville tournament and wrestling our best.”

Haggard continues to be a leader, and noted that the season is just getting going, “We went into the dual with one goal and it was just to take care of business, and my team did a great job with that. However, the season is not over so we are just getting back in the wrestling room and going back to work.”

The teams will train hard as they prepare for what’s next. The boys will travel to Smithville for a tournament on Saturday, December 19. Coach Mitchell  is optimistic, saying, “We are in a good spot right now heading into the weekend, which will be a big test for us. Basically the best teams in the state in our classification will be at Smithville.”

The girls will next be in action on Monday, December 21, at Park Hills.