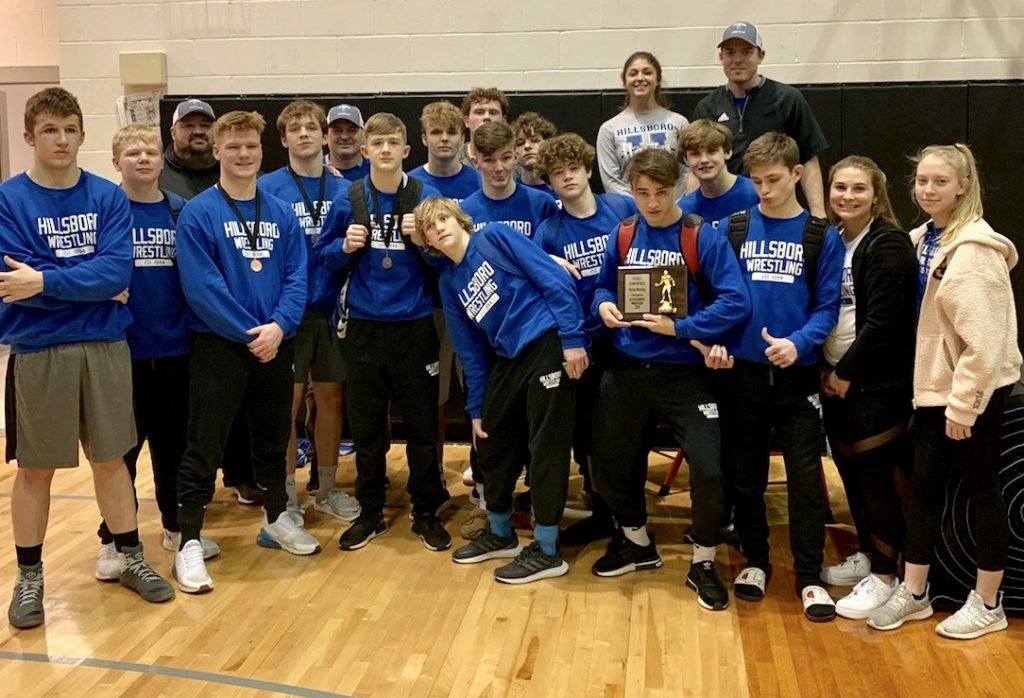 Hillsboro Wrestling Program Shaping Up, Poised For Big Things in 2020

District and state championships are realistic possibilities for new look Hawks this season.

Another season of high school wrestling action is on the horizon. With six members of last year’s team returning, state qualifiers no less, Hillsboro is looking strong. Head coach Matthew Mitchell previewed the upcoming season, saying his group sees a district title and state tournament run in their near future.

Last season the Hawks won the JCAA Conference, took second in their district tournament (Class 3 District 1) and 10th place in the Class 3 state tournament. Returning to the team will be seniors Aidan Haggard and Zach McNees and junior Dalton Litzsinger. Each of the three competitors are two-time state qualifiers. Litzsinger took third place at state.

Also returning will be sophomores Evan Morris, Griffin Ray and Gavin Alexander. Morris was a state qualifier, Ray took fifth place at the state tournament and Alexander returned home from the tournament as a champion. Mitchell feels his squad has an edge as they look to build on what they did last season.

“I think one of our strengths now is just experience at the state meet. We have a lot of kids with a lot of experience. Those kids will be able to share that with our younger kids and help them along the way,” Mitchell said. “They can set an example in the practice room as well to show them the amount of hard work it takes to reach the state tournament.”

Mitchell said the best way to prepare his team for state is to give them tougher competition, but admitted the more challenging aspect of this season will be navigating the team through it during a pandemic.

“We are still experiencing a lot of schedule changes as teams adjust to the state COVID-19 recommendations. Overall, I think we have been able to build a tough schedule for our kids given all the cancellations. It may not look like a regular year, but I think it will still be challenging,” Mitchell said.

The Hawks will be wrestling up a class this season and Mitchell sees teams like Seckman, Lafayette and Francis Howell as nice tests throughout the year. Internally there will be some competition as well for spots on varsity.

“Sophomores Blake Jackson, Nick Green, Eddie Hines, Nate Barnett and juniors John Bennett and Jordan Jarvis all return with some Varsity experience. We also have some freshmen that might make some noise this year including Sam Richardson, Hunter Rhodes, and Aidan Black,” Mitchell said.

“In addition, our girls squad has two seniors, Marissa Hudman and Grace Johnson. Grace was really close to qualifying for state last year. I think she could have a great season. We also have a freshman named Kate Hendrix that could make some noise in her first year of high school.

The Hillsboro Hawks are optimistic about their chances, and will be ready for anything once the season finally kicks off in just a few weeks.

Hillsboro Wrestling Program Shaping Up, Poised For Big Things in 2020