Nine penalties were just the tip of the iceberg on Friday, as the Jefferson Blue Jays dropped to 1-1 after a 16-point loss at home to Cuba.

The Cuba Widcats had a pretty potent passing game Friday when they traveled to Festus to play the Jefferson Blue Jays.  The visitors collected four TD passes en route to their 37-21 victory over Jefferson.  But JHS head coach Alex Rouggly had some other ideas about the reasons for his team’s performance.

“Tonight was a night where we made some key mistakes in key moments,” the head coach lamented.  “Whether that be penalties (nine total for 70 yards), missed assignments, or blown coverages.  We have to continue to learn and grow from those in order to become a better football team.”

The Wildcats used a 36-yard touchdown pass in the first quarter, and a 26-yard TD strike in the second to take a 14-0 lead with 10:42 remaining in the first half.  Jefferson got right back into the game when Will Schnitzler went on a 50 yard TD jaunt just a minute after Cuba scored.  With a Will Breeze extra point, the score was 14-7.

But Cuba’s quick strike offense put the lead back up to 14 points 23 seconds later with an 83-yard pass the hit pay dirt.  The visitors led 21-7.  Not be out-done, Schnitzler brought the Blue Jays back to within a touchdown when he scored on an 83-yard run just 27 seconds later.  After all that, the halftime score would eventually be 21-14 in favor of the Wildcats.

It would be essential for Jefferson to come out of halftime and try to establish control of the tempo of the game, but the opposite of that happened in the third quarter. 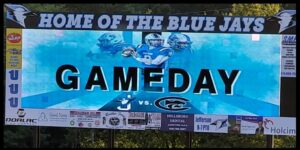 Schnitzler added an eight-yard TD run in the fourth quarter, while Cuba tacked on a 25-yard field goal, bringing the final score to 37-21.

If there was a highlight for Jefferson, it had to be Schnitzler.  He carried the ball 25 times for 215 yards and three touchdowns.  He also added three tackles, three assists, and an interception on defense.  He said the Blue Jays will be back.  “I thought the team came out and played hard and fought through some adversity that hit early on during the week.  Some little mistakes cost us in the long run.  Next week, we will all be back 100 percent for 48 minutes.”

Sean Usery added 11 carries for 40 yards.  Meanwhile, Drew Breeze connected on three passes for 60 yards, two of those going to Will Breeze.  On defense, Dawson Jakoubek netted 11 tackles, three assists, two tackles for loss, and a sack.  He became Jefferson’s career leader in tackles on this night.  He said the Jays need to be more opportunistic.  “I think we battled hard all night, and we had moments to switch momentum,” he stated.  “We just didn’t capitalize on key moments of the game, and it cost us in the long run.  We’ve got to clean up some mental mistakes for next week’s game.  It’s a must win against Herky.”

Coach Rouggly knows games like this can be helpful in the long run.  “I applaud our kids’ efforts as they fought until the end,” he commented.  “We had some kids that had to come in and play some positions when some adversity hit our team earlier this week.  All of those kids grew from the Friday night varsity experience they got tonight.  We will get better from this, and shift the focus to the Herculaneum Blackcats during the coming week.”

The Jays will need to rebound next week against Herky, as the Blackcats are coming off a big loss to Duchesne last night.  Kickoff at Herky is scheduled for 7:00 p.m.