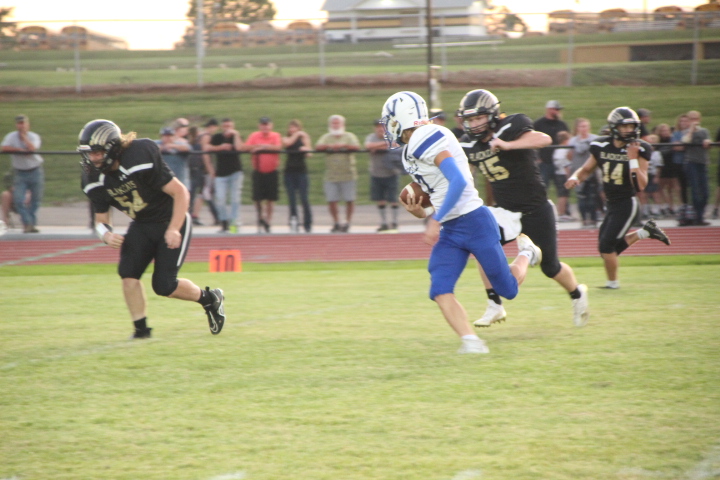 Valle Catholic continues its early season dominance on both sides of the ball with 53 first half points in a 59-0 blowout win at Fredericktown.

If Fredericktown had dreams of knocking off state-ranked Valle Catholic at home on Friday night, those dreams quickly became nightmares thanks to a first-half onslaught by the undefeated Warriors, who took down the game 59-0.

Valle scored four touchdowns in each of the first two quarters and led by an eye-popping score of 53-0 at halftime.

Bryce Giesler was back to his old tricks early in the game. The returning All-Stater ran it in from 32 yards out and with Will Kuehn’s PAT the score was 7-0.

The defense then decided it wanted a turn to reach pay dirt, as Carson Tucker returned an interception 28 yards for a score. This time a bad snap on the PAT kept the score 13-0.

Moments later, quarterback Chase Fallert hit Rylan Fallert on an 11-yard scoring strike. The Warriors got the missed extra point back with a successful two-point conversion as Fallert found Harry Oliver in the endzone to make the score 21-0.

Just over a minute later, the Senior Tucker got to live out a dream most defensive players never experience when he scored his second touchdown in the same game. This time he scooped up a fumble and ran it in from 18 yards out. A blocked PAT kept the score at 27-0 at the end of a devastating first quarter for the homestanding Blackcats.

Unfortunately for Fredericktown, the second quarter was not going to get any better.

Less than two minutes into the quarter, Fallert connected on a 30-yard touchdown pass to Giesler. This time Fallert’s attempt to find Oliver on a two-point attempt was unsuccessful, so the score stayed at 33-0.

Just over a minute later, Tim Okenfuss got in on the fun with a 47-yard TD run. Kuehn’s PAT put the Warriors up 40-0 with 8:47 still left in the first half.

Midway through the quarter, a short TD run and Kuehn’s PAT made it 47-0.

Valle wasn’t quite done before the two teams took a break for halftime. Sophomore Wyatt Fallert hit Senior Eli Fallert on a 30-yard pass that found the end zone. The PAT missed and it was 53-0 at the break.

By the way, if it seems like the name Fallert is mentioned quite a bit, you’re right. There are seven players on the Warriors’ roster with that last name and only two of them are Seniors. So, you’re likely to hear that name a lot more in the next couple of years.

The only score of the second half occurred with over seven minutes left in the third quarter when Senior Brendon Corbett crossed the goal line from four yards out. A kneel down on the two-point attempt kept the score at 59-0, which is how the game ended.

Valle rushed for 288 yards. Giesler led the way with 63 yards and two TD’s, while Okenfuss added 60 and a score. Twelve different players carried the rock for the Warriors.

Quarterback Chase Fallert was six for eight through the air for 132 yards and two TD’s. Wyatt Fallert came in to relieve the starter and connected on four of five passes for 62 yards and a TD.

In addition to the two defensive touchdowns, the Warriors’ defense had a whopping 20 tackles for loss from ten different players. That’s 50 TFL’s on the season. Valle also forced three turnovers, giving the team six on the season.

Valle is averaging 56 points per game in season-opening wins over Seckman, Festus and Fredericktown. The Warriors conclude a three-game road trip next Friday, September 16th with a 7 p.m. game at Potosi. The Trojans are 1-2 after a season opening win over St. Clair and back-to-back losses to Farmington and Parks Hills Central.

If you missed any of the action Friday, rewatch it on the Streamline Sports app. Available for iPhone/Android, Roku, Firestick and Apple TV.