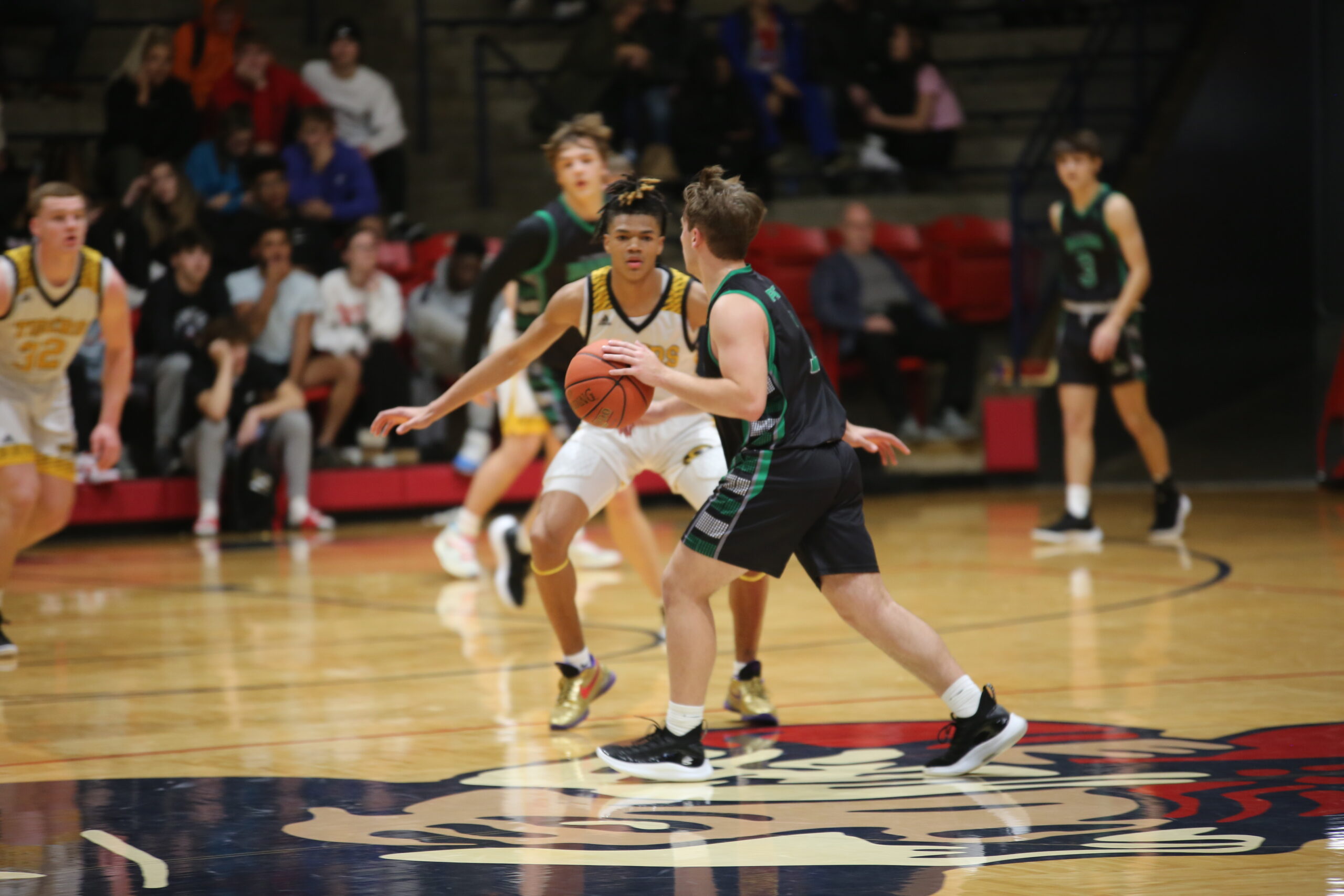 The Ste. Genevieve Dragons Boys Varsity Basketball team battle hard, but their chances are dashed early as they get bounced from the Christmas Tourney.

It was a streaky week of high school basketball for the Ste. Genevieve Dragons, who were eliminated from 66th Bob Sechrest Jr. Central Christmas Tournament, after a 1-2 performance. The Dragons entered the tournament as the sixth seed of 16 schools, and while they did win their first game, they were sent packing in each of the next two.

The opening tilt pitted St. Genevieve against the 11th seed, the Fredericktown Black Cats. The Dragons opened up the scoring quickly and had a big first quarter with 19 points to the Black Cats’ six. The foray continued into the second quarter as Ste. Gen ended the half with a sizable 37-19 lead.

The Dragons scoring slowed quite a bit in the third and fourth quarters, as they were only able to put up nine in each frame. However, it was enough to get the job done as Ste. Gen won the game 55-33. Rudy Flieg stole the show with an impressive 23 points in the game, while Wesley Basler added nine.

That victory moved them into the winners bracket where the Dragons would be forced to square up against the three seed, the mighty Festus Tigers. In the first round, the Tigers easily defeated the 14 seed Crystal City, and were raring to go. The Dragons needed to come out hot, and did so lighting up the scoreboard with 21 first quarter points to earn a three-point lead. Unfortunately, in the next quarter, the tables turned and it was Festus who reigned down buckets and put up 24 to take a big lead into the half, 42-35.

Down by seven, the Dragons needed to breathe fire in the third quarter. They ripped the twine for 17 points, and slashed the Tigers’ lead to only three, making the score 55-52. As much as they fought, however, the Dragons couldn’t close the gap all the way in the fourth quarter, and lost the game by two, 67-65. Ricky Hunter led the way for the Dragons, putting up 19 points. Thomas O’Brien added 14 as well, but it wasn’t enough to keep the Dragons in the top bracket.

That loss pushed the squad down to the fifth place bracket. For this game, their foes would be the seven seed, the Hillsboro Hawks. It was another hot start and cold finish for the Dragons though, who came out and laced 17 points to Hillsboro’s seven in the first quarter. However, they only managed to eke out eight more in the next quarter. The Hawks took advantage and rallied to take a 30-25 lead into the break.

The Dragons got hot again in the third and scored 16 points, cutting the lead down to three. However, the hot streak snapped and Ste. Gen was held to only nine in the fourth, losing the game 59-50. Flieg was back at it, lighting up the scoreboard with 21 points. Hunter also contributed 15, while Aiden Boyer added 10.

The tournament is now in the books, and while the Dragons showed flashes of brilliance, the inconsistencies hurt them. Ste. Gen will now regroup, build on what they learned, and take those lessons into the remainder of the season.